Boston Marathon celebrates 50 years of women in the race 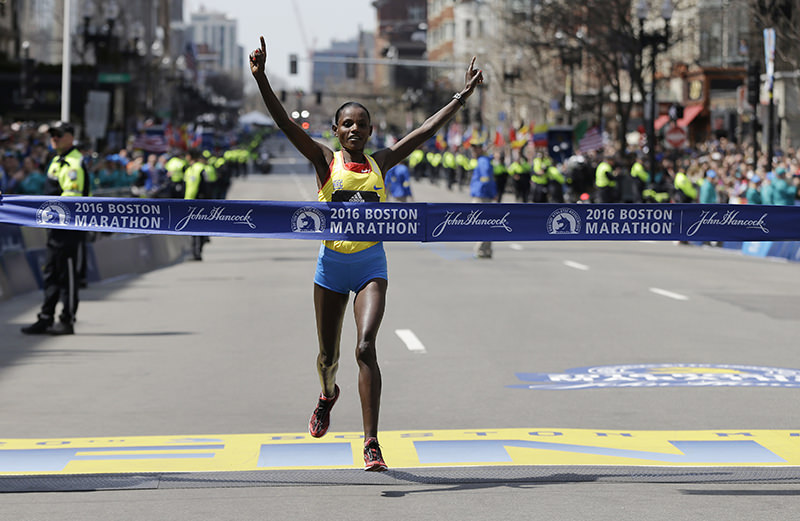 When Joan Benoit Samuelson was in high school in the 1970s, the longest distance she was allowed to run was a half-mile.

"It was thought that running would do us bodily harm, and we would never bear children," said the woman who went on to win two Boston Marathons and the inaugural Olympic marathon gold medal.

Fifty years after Bobbi Gibb tucked her long, blonde ponytail under a hooded sweatshirt and sneaked onto the course, the Boston Marathon is celebrating a half-century of women who have broken barriers on their way to breaking the finish-line tape.

More than 14,000 women — including Samuelson's daughter, Abby — were in the field of 30,747 that left Hopkinton on Monday for the 26.2-mile jaunt to Boston's Back Bay. The women started first, and the first among them to reach the Boylston Street finish line was Atsede Baysa from Ethiopia who finished the race in 2:29:19 and received $150,000 and an olive wreath — the same prize as the men's winner, Ethiopian Lemi Berhanu with a course time of 2:12:44.

"It's an exciting time to be a female athlete, a female runner," said Shalane Flanagan, a soon-to-be three-time Olympian and the daughter of a former women's marathon record-holder.

"It's always been a given to me that I have the same opportunities as men," she said. "I guess I've taken it for granted: 'Oh, that's how it should be done.'" I just assumed, 'Why wouldn't it be that way?'"

While sports such as soccer and tennis are still fighting over equal pay for women, running adapted quickly. Even the Boston Athletic Association, which was originally formed to encourage the pursuit of "manly sports," has paid the men's and women's winner the same amount since first awarding prize money in 1986.

Guy Morse, who was the race director then, said it was more controversial to pay the winners after almost a century of amateurism than to treat men and women equally. "Once we went that way, it was really an easy decision to make it across the board," he said.

Current B.A.A. president Joanne Flaminio, the first woman to head the organization, noted that the Boston Marathon has created a separate start for the women's race, allowing them to run free of the men's field. "It allowed them to have their own race," she said.

"Everything we have done is to give everyone an equal opportunity to run," she said.

Gibb will serve as grand marshal for this year's race — the 120th — and this week Flaminio announced that Gibb's three first-place finishes previously relegated to an "Unofficial Era" section of the event's history will now be recognized as part of a "Pioneer Era." (Sara Mae Berman also earned three victories from 1969-71 before women were allowed to enter the race.)

Growing up before the boom that expanded marathoning into the bucket list accomplishment it is for tens of thousands today, Gibb nonetheless enjoyed running and sought out its biggest challenge.

Then, as now, that was the Boston Marathon.

"I just fell in love with it because I knew these people felt the same way about running I felt," she said this month as she looked ahead to the 50th anniversary of her run. "I thought: If I can run the marathon and run it well, it will ... break down the stereotypes that have been used to keep women confined."

Told she was too pretty to apply to medical school — "I would upset the boys in the lab," she said — Gibb went on a cross-country road trip in her Volkswagen Microbus with her malamute puppy, stopping to run as many as 40 miles in a stretch. Convinced she could complete the 26.2-mile distance, she returned to Boston on a Greyhound bus the day before the 1966 race.

"I convinced my mom to drive me to the start and I told her, 'This is going to help set women free,'" Gibb said. "That really got to her, because she was kind of a frustrated housewife — a beautiful, intelligent woman who was limited in what she could do."

Gibb waited until about half the field had passed by, then she jumped out from behind forsythia bush and onto the course. The men realized there was an interloper among them "after a very few minutes studying my anatomy from the rear," she said.

"To my great delight, they said, 'Gee whiz. I wish my wife would run,'" Gibb said. "This is just what I wanted: men and women treating each other with respect."

Gibb got shouts of encouragement from policemen and cheers from the crowd that grew loudest when she ran past the all-women's Wellesley College. She knew then that she wouldn't be thrown out of the race, but she knew that if she didn't finish things could be worse for women than before.

Despite the blisters from running in borrowed shoes and the remnants of an ill-advised, roast beef dinner settling in her stomach, Gibb finished in 3 hours, 21 minutes, 40 seconds. The governor shook her hand; Sports Illustrated referred to her as a "shapely blonde housewife."

"She wasn't trying to beat men, or to protest the male-dominated world. She was just saying 'This is a great sport, and I want to participate, too,'" said Amby Burfoot, who won the 1968 race and is now an editor of Runner's World. "It was slow in the beginning, when the lords of running were straight out of 'Chariots of Fire.'

"Bobbi was so far ahead of her time; it's not like thousands of women started running the next day," he said. "That just makes the efforts of Bobbi and the other pioneers so much more impressive."

A year after Gibb's first run, Kathrine Switzer registered for the race using her first initial, B.A.A. co-director Jock Semple chased her onto the course and tried to pull off her bib number; men in the race knocked him out of the way.

"It was groundbreaking," said Desi Linden, who has twice been the top American woman in Boston and will head to her second Olympics this summer. "There's so much respect for that. I don't know if I would have had the courage to do that. I feel super fortunate that I've never had that experience."

An accomplished sculptor, Gibb has been commissioned to create a piece that would be placed along the course to commemorate the race's pioneering women.

But she already looks out at her work with pride.

"Almost half the race is women now. This is the world that I wanted to create," she said. "This is what I wanted to see: men and women and individual people who have taken on the challenge or running the marathon. Each one has an incredibly unique story.

"It's ordinary people who move the world into a happier and healthier place," Gibb said.