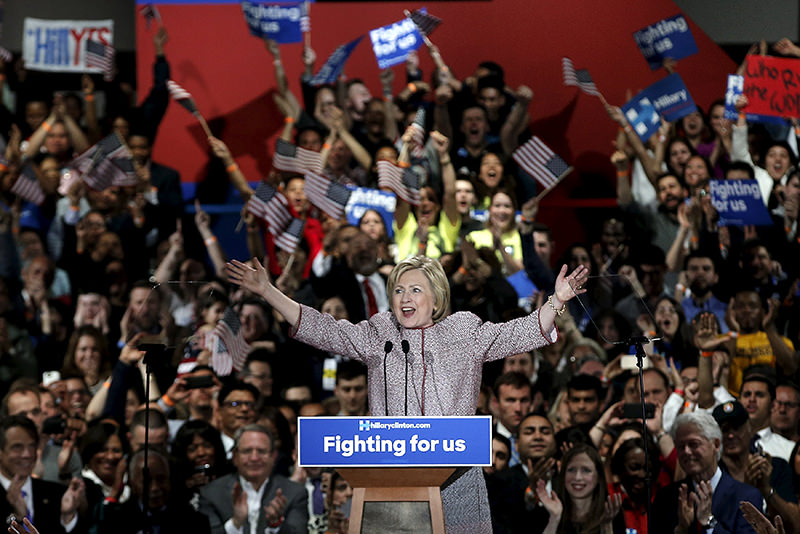 by Associated Press Apr 20, 2016 12:00 am
Front-runners Donald Trump and Hillary Clinton swept to victory with ease in Tuesday's New York primary, with Trump bouncing back from a difficult stretch in the Republican contest and Clinton pushing closer to locking up the Democratic nomination.

Trump's victory was a psychological boost for his campaign. He captured more than 50 percent of the vote in New York and was headed toward a big delegate haul in his home state, a commanding showing that keeps him on a path to the Republican nomination if he continues to win. He claimed at least half of the 95 delegates at stake, and was likely to add to his tally in individual congressional districts.

"We don't have much of a race anymore," he said during a victory rally in the lobby of the Manhattan tower bearing his name. He peppered his confident remarks with more references to the economy and other policy proposals than normal, reflecting the influence of a new team of advisers seeking to professionalize his campaign.

Clinton's triumph padded her delegate lead over rival Bernie Sanders, depriving him of a crucial opportunity to narrow the margin. Sanders vowed to compete through all of the voting contests, though his odds of overtaking Clinton at this stage in the race are low.

"The race for the nomination is in the home stretch, and victory is in sight," Clinton declared to cheering supporters.

With 247 delegates at stake, Clinton picked up at least 104 while Sanders gained at least 85. Many remained to be allocated, pending final vote tallies.

"We've got a shot to victory," Sanders said in an interview with The Associated Press. "We have come a very long way in the last 11 months, and we are going to fight this out until the end of the process."

Overall, Trump leads the Republican race with 756 delegates, ahead of Sen. Ted Cruz with 559 and Ohio Gov. John Kasich with 144. Securing the Republican nomination requires 1,237.

Among Democrats, Clinton has 1,862 delegates to Sen. Bernie Sanders' 1,161. Those totals include both pledged delegates from primaries and caucuses and superdelegates, the party insiders who can back the candidate of their choice regardless of how their state votes. It takes 2,383 to win the Democratic nomination.

Sanders spent Tuesday in Pennsylvania, as did Trump's main rival Cruz. The Texas senator panned Trump's win as little more than "a politician winning his home state," then implored Republicans to unite around his candidacy.

"We must unite the Republican Party because doing so is the first step in uniting all Americans," Cruz said in remarks read off a teleprompter.

The fight for New York's delegate haul consumed the presidential contenders for two weeks, an eternity in the fast-moving White House race. Candidates blanketed every corner of New York, bidding for votes from Manhattan and the surrounding boroughs to the working class cities and rural enclaves that dot the rest of the state.

Trump needed a strong showing to keep alive his chances of clinching the Republican nomination before the party's July convention — and to quiet critics who say the long primary season has exposed big deficiencies in his campaign effort.

Having spent months relying on a slim staff, Trump has started hiring more seasoned campaign veterans. He acknowledges that bringing new people into his orbit may cause some strife, but says the moves were necessary at this stage of the race.

Cruz is trying to stay close enough in the delegate count to push the Republican race to a contested convention. Cruz's campaign feels confident that it's mastered the complicated process of lining up individual delegates who could shift their support to the Texas senator after a first round of convention balloting.

Kasich, the only other Republican left in the race, was seeking to add to his scant delegate total and keep up his bid to play a long-shot spoiler at the convention. Kasich has refused to end his campaign despite winning only his home state.

Trump's political strength, though he boasts of drawing new members to the party, has left some Republicans concerned that his nomination could splinter the Republicans. Among Republican voters in New York, nearly 6 in 10 said the nominating contest is dividing the party, according to exit polls.
Last Update: Apr 20, 2016 7:37 am
RELATED TOPICS