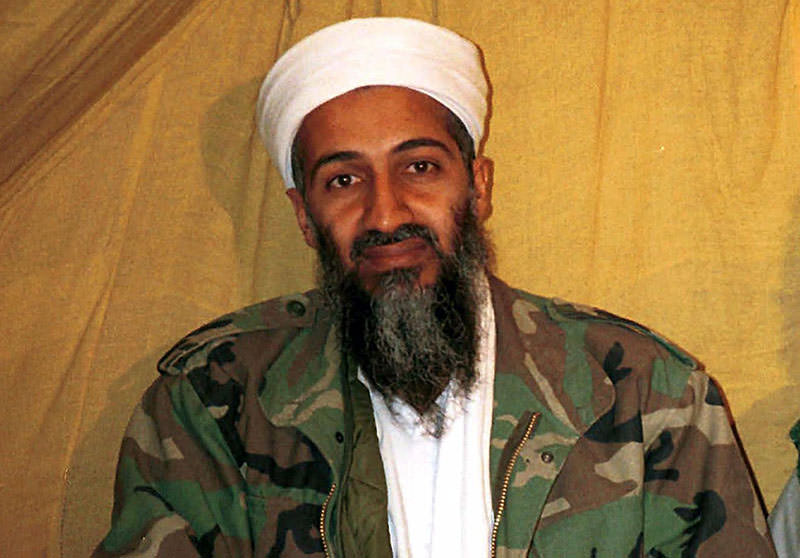 This undated file photo shows al Qaida leader Osama bin Laden in Afghanistan. (AP)
by May 02, 2016 12:00 am
The Central Intelligence Agency's unusual decision to "live tweet" the 2011 raid in which Osama bin Laden was killed "as if it were happening today," was mocked and criticized on Twitter.

The al-Qaeda leader was killed on May 2, 2011, by US Navy Seals in his hideout in Abbottabad, Pakistan.

The CIA used a series of tweets on Sunday, using the hashtag #UBLRaid, saying: "To mark the 5th anniversary of the Usama Bin Ladin operation in Abbottabad we will tweet the raid as if it were happening today."

The tweets included images of the compound that bin Laden was hiding in, as well as a now-famous photograph of the scene in the White House when the news came in.

That picture, released at the time by the White House, shows US President Barack Obama sitting to the left of the Situation Room conference table staring at a monitor providing a live feed of the raid. Hillary Clinton, then secretary of state, is holding her hand over her mouth with an expression of shock on her face.

Before the blow-by-blow account of the raid, the CIA posted on Twitter: "Success of mission was culmination of years of complex, thorough & highly advanced intel ops & analyses led by CIA w support of IC."

The jokes, memes and criticism followed, with some on Twitter describing the CIA move as "grotesque," others posting that the agency "had lost the plot."

The popular Daily Show tweeted: "If you live tweet the Bay of Pigs invasion, call us. Otherwise, stop it. #UBLRaid"

One journalist noted: "Shouldn't the @cia call its anniversary tweeting of the Osama Bin Laden raid a "dead-tweet" instead of a "live-tweet"?"