Venezuela's Maduro calls for 'rebellion' if opposition ousts him in referendum 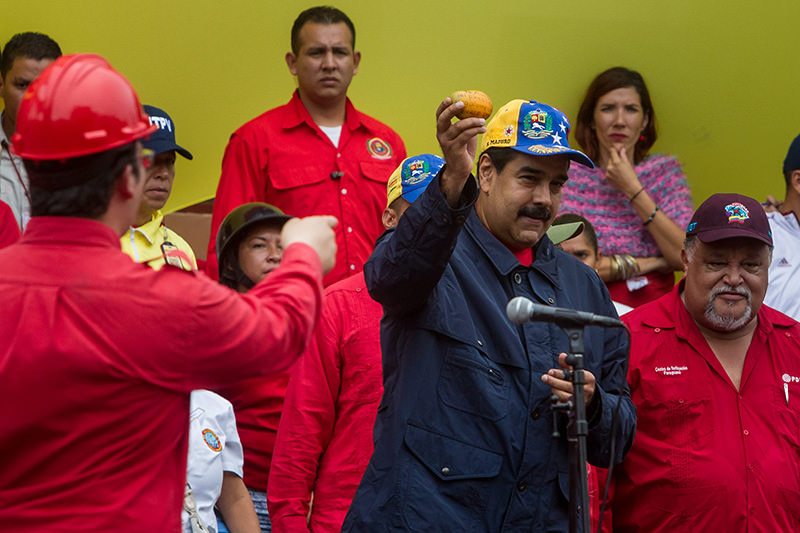 A defiant Venezuelan President Nicolas Maduro urged supporters to launch a general strike and "rebellion" if the opposition succeeds in ousting him from office in a referendum.

Maduro's fiery May Day speech came as Venezuela's emboldened opposition prepared on Tuesday to present more than 10 times the roughly 200,000 signatures needed to begin organizing a referendum to remove the unpopular president, blamed by many for the country's deep economic crisis.

Maduro vowed to fight for his job, despite a deep crisis in the country that has seen riots and looting in the second city over four-hour daily blackouts introduced to save energy.

"If the oligarchy some day does something against me and manages to take this palace, I order you to declare yourselves in rebellion and decree an indefinite general strike," he told supporters massed outside the presidential palace on Sunday.

Maduro told them the referendum "is an option, not an obligation. Here the only obligation is the presidential election and that will be in 2018."

A recent poll found that more than two-thirds of Venezuelans want Maduro, elected president by a razor-thin margin in 2013, to leave office.

Once-booming Venezuela, which has the world's largest proven oil reserves, has plunged into economic chaos as global crude prices have collapsed. It has been in recession since 2013.

The import-dependent country faces acute shortages of food and basic goods like toilet paper due to a lack of currency, more than 96 percent of which it gets from oil sales.

Maduro has vowed to press on with the socialist "revolution" launched in 1999 by his predecessor, the late Hugo Chavez, which has given Venezuela a government-led economy.

If the electoral board accepts the signatures collected by the opposition as valid -- far from a sure bet, since opponents say the board is stacked with Maduro cronies -- the opposition will then have to collect four million more for the board to organize the vote.

Opponents are racing to hold the referendum before the end of the year. According to Venezuela's constitution, after January 2017 a successful recall vote would transfer power to Maduro's vice president rather than trigger new elections.

Jesus Torrealba, spokesman for the MUD opposition coalition that controls Venezuela's legislature, said the signatures -- collected in "record time" -- will be delivered to the electoral board on Tuesday.

However board official Tania D'amelio suggested on Twitter that the board might not start verifying the signatures until late May.

Venezuelans lost half an hour of sleep Sunday as their clocks were set forward on the president's orders in a move to save power.

At 2:30am local time Sunday, Venezuela shifted its time ahead by 30 minutes -- to four hours behind Greenwich Mean Time.

The move, announced in mid-April, is part of a package of measures the embattled socialist president is pursuing to cope with a crippling electricity shortage.

Hugo Chavez implemented the unusual half-hour time shift back in December 2007, saying he didn't want children to have to walk to school in the dark. Chavez died in 2013.

In announcing the time change, the Maduro government said 30 extra minutes of daylight at the end of the day would curb the use of lights and air conditioning, especially draining for the power grid.

Maduro's government has also instituted four-hour daily blackouts across most of the country, reduced the public-sector workweek to two days and ordered schools closed on Fridays -- adding to the woes of a nation already stuck in a crushing recession.

Maduro blames the power crunch on the El Nino weather phenomenon, which has unleashed the worst drought in 40 years, reducing the reservoirs at Venezuela's hydroelectric dams.

But the opposition says mismanagement is to blame for the power crisis as well as the recession and shortages.