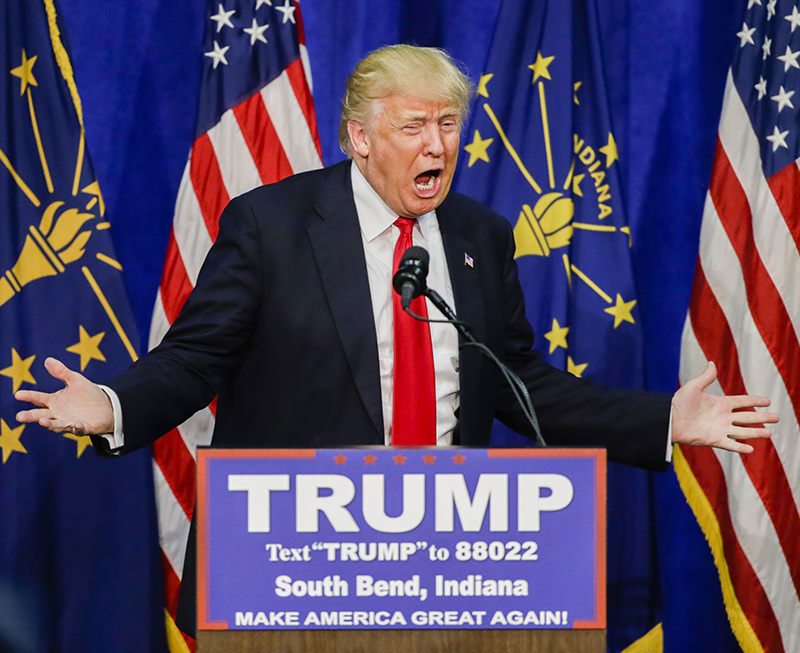 US Republican presidential candidate Donald Trump campaigns in South Bend, Indiana (EPA Photo)
by May 03, 2016 12:00 am

The startling allegation, and Cruz's full-throated retort, occurred on the morning of a crucial primary election in Indiana where Trump is seeking to land a knockout blow against his chief challenger for their party's nomination.

Trump, parroting a recent story by the National Enquirer tabloid, took to Fox News to say the Texas senator's father Rafael Cruz, an immigrant from Cuba, was "with Lee Harvey Oswald" before the assassination.

"I mean, the whole thing is ridiculous. What is this? Right prior to his being shot, and nobody brings it up," Trump told Fox by telephone.

The Enquirer, which has published previous stories deeply critical of Cruz, said an August 16, 1963 photograph of Oswald in New Orleans handing out leaflets in support of Fidel Castro shows a young Rafael Cruz nearby.

Rafael Cruz was once a supporter of rebel leader Castro, but he admits in his biography "A Time for Action" that he was unaware that Castro was a communist, according to the Miami Herald.

The paper said there was no corroborating evidence that Cruz -- who is now fervently anti-communist -- was affiliated with Oswald, and that the Cruz campaign said candidate's father is not in the photograph.

"Donald Trump alleges that my dad was involved in assassinating JFK," a visibly angry Cruz told reporters at a campaign event in Indiana.

"Let's be clear, this is nuts," he said. "Yes, my dad killed JFK, he is secretly Elvis, and Jimmy Hoffa is buried in his backyard."

"This man is a pathological liar. He doesn't know the difference between truth and lies," Cruz added, comparing Trump to a schoolyard bully and saying the real estate mogul boasts of being a "serial philanderer."

"The man is utterly amoral," Cruz said. "Bullies come from a deep, yawning cavern of insecurity."

Cruz sees Indiana as one of the final firewalls where he could stop Trump from seizing the Republican nomination.

"Indiana can pull us back, but it takes Hoosiers showing up and voting today, and the country is looking to Indiana, is looking to the judgment of the good men and women of this state," Cruz insisted.

Trump and Cruz are battling it out for Indiana's 57 Republican delegates. If the billionaire sweeps them, he will be on track to reach the 1,237 necessary to win the nomination outright.