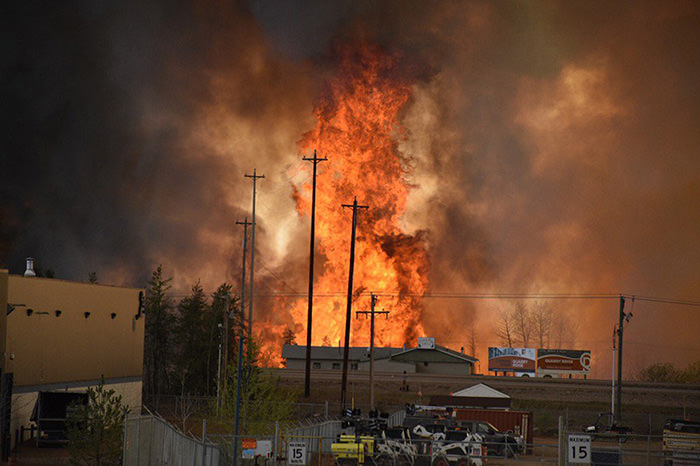 A wildfire forced the evacuation of the Canadian oil sands city of Fort McMurray, Alberta, destroying 80 percent of the homes in one neighborhood and extensively damaging property in a number of others, officials said Wednesday, warning that it could get worse in the coming hours.

More than 80,000 residents were ordered to flee as flames moved into the city, destroying whole neighborhoods. No injuries have been reported.

Unseasonably hot temperatures combined with dry conditions have transformed the boreal forest in much of Alberta into a tinder box. The wildfire threat ranged from very high to extreme in different areas.

An overnight update from the Regional Municipality of Wood Buffalo said the Beacon Hill suburb in the south end has suffered the most damage from flames with 80 percent of the homes lost. A dozen trailers on one street in the neighborhood of Timberlea have gone up in flames, with serious losses are reported in the Abasand and Waterways suburbs. Some homes have been lost in four other neighborhoods.

Fire chief Darby Allen told the Canadian Broadcasting Corp. on Wednesday that parts of wooded areas of the city are still burning but no structures were currently on fire. But Allen said he's worried about the plumes of smoke he sees outside his window and worried about the wind and its direction.

"It could be even more devastating unfortunately," he said.

Firefighters were working to protect critical infrastructure, including the only bridge across the Athabasca River and Highway 63, the only route to the city from the south.

Canadian Public Safety Minister Ralph Goodale said in a statement Wednesday he is watching the situation with "great concern" and said "situation is fluid and evolving rapidly." He noted the federal government is monitoring the situation carefully, including the military.

Defense Minister Harjit Sajjan, in a conference call from Germany early Wednesday, confirmed a formal request for assistance has been received from the Alberta government. What form that will take — at least on the military side — is still being determined and they are expecting to hear soon about the kind of equipment and personnel required.

"We're making all assets available, whatever the province and the emergency operations center assesses that they need," he said.

Alberta Premier Rachel Notley called it the biggest evacuation in the history of the province. Residents were panicked.

"When you leave ... it's an overwhelming feeling to think that you'll never see your house again," said resident Carol Christian, who drove to the evacuation center with her son and their cat.

"It was absolutely horrifying when we were sitting there in traffic. You look up and then you watch all the trees candle-topping ... up the hills where you live and you're thinking, 'Oh my God. We got out just in time.'"

Fort McMurray is the heart of Canada's oil sands region. The Alberta oil sands are the third largest reserves of oil in the world behind Saudi Arabia and Venezuela. Most oil sands projects are well north of the community, while the worst of the flames were on the city's south side.

Suncor, the largest oil sands operator, said it is reducing production at its regional facility - about 15 miles north of the city - so as "to allow employees and their families to get to safety."

"We had to literally drive through smoke and fire, vehicles littered all over the sides of the road, and we had to drive as fast as we could and breathe as little as we could because the smoke was so intense and we could feel the heat from inside the vehicle," she said.

Former National Hockey League player Doug Sulliman said he could see from his apartment balcony that both sides of the highway south were engulfed in flames and estimated hundreds of homes in Beacon Hill suburb over the hill were destroyed. "You could hear the pop, pop, pop because of the propane tanks. The fire was just consuming these houses. It just destroyed the whole community," he said.

He decided the best place to stay was the apartment, but he was forced out three hours later.

"I woke up just in time," he said in a phone interview. "Smoke had come into the apartment, but not bad. When I opened the door to the hallway it was burning my eyes and when I went outside it was burning my throat."

He said the highway opened and it was bumper to bumper and said there were many cars on the side of the road because service stations were out of fuel. He said RV campsites were destroyed.

"There was a Shell gas station that blew up and a Denny's next door. There was nothing but the foundation and it was still smoldering in flames," he said.

Medical staffers who were evacuated to Noralta Lodge, 26 kilometers (16 miles) north of Fort McMurray, were ready when a local woman went into labor.

The blaze had burned since Sunday and seemed on its way to being neutralized Tuesday morning, but it overwhelmed firefighters when winds shifted quickly and drastically in the mid-afternoon to the southwest of the city.

Pictures and video on social media depicted a hellish scene of fire jumping roads and burning debris pitched into the paths of cars as frantic residents, lined up bumper to bumper, scrambled and fumbled to find their way through the thick gray haze.

As the afternoon wore on and the fire intensified, more and more sections of the city were ordered evacuated until the entire community was ordered out after 6 p.m.

Oil sands work camps were being pressed into service to house evacuees as the raging wildfire emptied the city.

Officials were also evacuating non-essential staff at Suncor's base plant. It is 30 kilometers (18 miles) away and one of the closest facilities to the city. Spokesman Paul Newmarch said evacuees were moving into the plant's work camps.