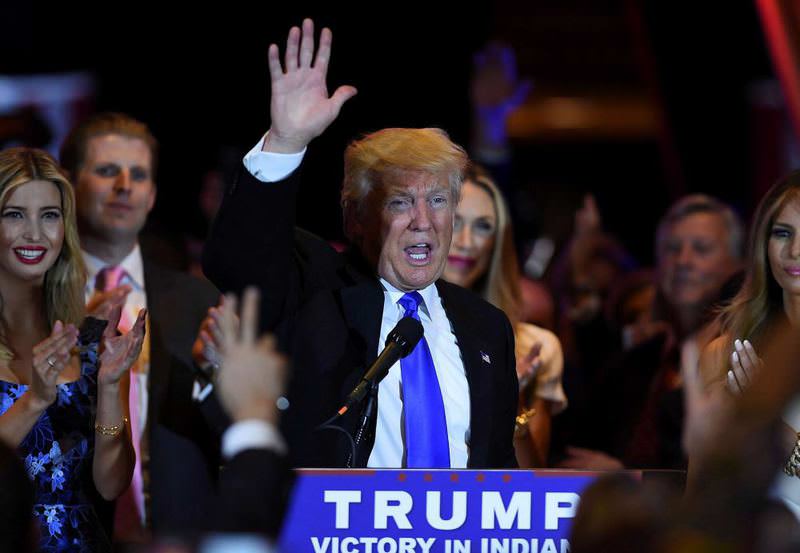 Donald Trump celebrates his victory in Indiana.
by Compiled from Wire Services May 05, 2016 12:00 am

Billionaire businessman Donald Trump has ascended to presumptive Republican nominee as he defeated his rivals in Indiana, while Democrat candidate Hillary Clinton's march has been slowed by Bernie Sanders

Billionaire reality TV star Donald Trump completed his transformation from long-shot White House candidate to presumptive Republican presidential nominee after his commanding win in Indiana's primary forced his main rival Ted Cruz to drop out of the race. The New York billionaire, who has never held public office, had repeatedly defied pundits' predictions that his campaign would implode. He prevailed despite making outrageous statements along the way that drew biting criticism but still fed his anti-establishment appeal. Trump now can prepare for a match-up in the Nov. 8 election. Hillary Clinton is expected to be his Democratic opponent, though her march to the nomination was slowed by rival Bernie Sanders' victory over her in Indiana.

Trump's immediate challenge is to unite deep fissures within the Republican Party, easing tensions with party loyalists who are appalled at his bullying style, his treatment of women and his signature proposals to build a wall on the border with Mexico and deport 11 million illegal immigrants. The New York businessman himself called for unity in a speech at a victory rally that was free of his usual bombast and flamboyance. He also directed fire at Clinton. "We're going after Hillary Clinton," he said. "She will not be a great president, she will not be a good president, she will be a poor president. She doesn't understand trade." Support for Trump among national Republicans had soared in recent weeks to the highest level of the primary campaign, according to Reuters/Ipsos polling. A recent poll found Trump with the support of 53 percent of Republican participants, well above Cruz at 25 percent. Ohio Governor John Kasich, the third Republican in the race, had support of 16 percent. In a potential general election match-up, however, Clinton led Trump by about 10 percentage points among likely voters. The poll included 623 Democrats and 556 Republicans and had a credibility interval of 5 percentage points. Trump's victory put to rest a belief that Republicans would choose their nominee at a contested convention among party leaders in July. Nonetheless, Kasich vowed to stay in the race until California holds its primary on June 7.

Republican National Committee Chairman Reince Priebus called Trump the party's presumptive nominee in a tweet and said, "We all need to unite and focus" on defeating Clinton. As the vote returns flowed in, Cruz announced that he had ended his campaign in Indianapolis, with his wife, Heidi, at his side. Cruz, 45, sounding beaten but defiant, said he no longer saw a viable path to the nomination. "We gave it everything we got. But the voters chose another path, and so with a heavy heart, but with boundless optimism for the long-term future of our nation, we are suspending our campaign," said Cruz, a U.S. senator from Texas. Cruz's exit came as a surprise, and many Republicans who had denounced Trump were grappling with what to do next. Reuters/Ipsos polling in April found Cruz supporters split on whom to support if their candidate quit. Thirty-eight percent of the 1,639 Cruz backers said they'd vote for the New York mogul in a match-up between Trump and Clinton, while 21 percent chose Clinton. About 40 percent of the Cruz supporters would not select either candidate. The poll had a credibility interval of 3 percentage points.

Lanhee Chen, who had advised former Republican candidate Marco Rubio, on Tuesday night floated the possibility of a third-party candidate. "Tonight's outcome raises seriousness & urgency of discussions about third-party alternative; how real it is depends on who steps up to run," he tweeted. Other prominent Republicans said they would support Trump. "It's binary now. It's Trump or Clinton, my vote's for Trump," former Louisiana Governor Bobby Jindal, who dropped his own White House bid in November 2015, said on Fox News.

Vermont Sen. Bernie Sanders eked out a victory over Clinton in Indiana, but the outcome will not slow the former secretary of state's march to the Democratic nomination. Heading into Tuesday's voting, Clinton had 92 percent of the delegates she needs. "I know that the Clinton campaign thinks this campaign is over. They're wrong," Sanders said defiantly in an interview Tuesday night. But Clinton already has turned her attention to the general election.

She and Trump now plunge into a six-month battle for the presidency, with the future of America's immigration laws, health care system and military posture around the world at stake. While Clinton heads into the general election with significant advantages with minority voters and women, Democrats have vowed to not underestimate Trump as his Republican rivals did for too long.

Indiana was viewed as the last gasp for Cruz, the fiery Texas conservative. He campaigned aggressively in the state, securing the support of Indiana's governor and announcing businesswoman Carly Fiorina as his running mate but lost momentum in the closing days. Cruz had clung to the hope that he could keep Trump from reaching the 1,237 delegates needed for the nomination and push the race to a rare contested convention. But aides said he made the decision to drop out early Tuesday evening, shortly after most polls in Indiana had closed. "I've said I would continue on as long as there was a viable path to victory; tonight I'm sorry to say it appears that path has been foreclosed," Cruz told a somber crowd in Indianapolis. Only about half of Indiana's Republican primary voters said they were excited or optimistic about any of their remaining candidates becoming president, according to exit polling conducted by Edison Research for The Associated Press and television networks. Still, most said they probably would support the GOP winner. Clinton, too, needs to win over Sanders' enthusiastic supporters. The Vermont senator has cultivated a deeply loyal following, particularly among young people, whom Democrats count on in the general election.
RELATED TOPICS