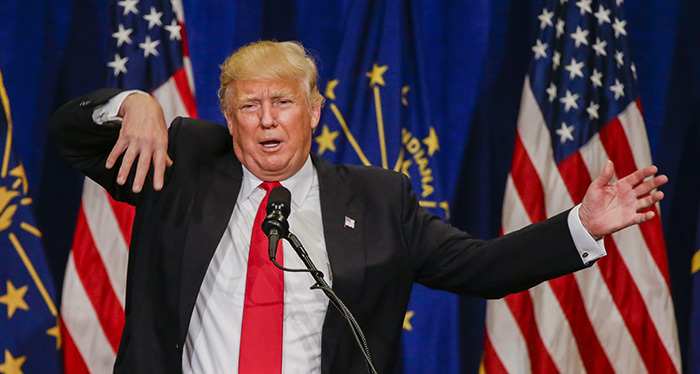 Businessman and Republican presidential candidate Donald Trump gestures as he speaks at a campaign rally at the Century Center in South Bend, Indiana, USA, 02 May 2016.
by Compiled from Wire Services May 05, 2016 12:00 am

Supporters of billionaire Donald Trump, the presumptive U.S. Republican presidential nominee, see refugees arriving from Iraq and Syria as one of the greatest threats to the United States, according to a study released yesterday by the Pew Research Center.

Eighty-five percent of respondents who said they supported Trump saw the refugees fleeing DAESH as a threat, compared with 74 percent of Republicans overall, according to the study. Only 40 percent of Democrats viewed the refugees from the region as a major threat.

Trump's campaign said in a statement last December that he was "calling for a total and complete shutdown of Muslims entering the United States until our country's representatives can figure out what is going on." His comments followed fatal attacks in Paris claimed by DAESH and a deadly shooting spree in San Bernardino, California, by a Muslim couple who the FBI said had been radicalized.

U.S. President Barack Obama's promise to admit 10,000 Syrian refugees by the end of the year has sparked a backlash from Republicans, concerned that violent militants could come into the United States posing as refugees. More than 30 governors have tried to block refugees from their states.

There are nearly 5 million registered Syrian refugees according to the United Nations, a result of a war in which more than 250,000 people have been killed.

The Pew report, based mostly on telephone interviews with about 2,000 U.S. adults from April 12 to April 19, found that 65 percent of Trump supporters also saw the U.S. involvement in the global economy in a negative light. There were also contradictions among Americans when asked about U.S. defense spending and foreign military action.

Although 35 percent of all respondents said they were in support of increasing defense spending, the highest level of support since the Sept. 11, 2001, attacks, almost 60 percent said other countries should deal with their own problems. Respondents overall saw DAESH as the top foreign policy concern, followed by cyberattacks and global economic instability, according to the report.

Trump pledged Wednesday to unify the fractured Republican Party following a bruising primary season, as he declared the battle for the White House starts now against likely Democratic nominee Hillary Clinton. Trump's path to the Republican presidential nomination is clear after his command victory in Indiana's primary Tuesday pushed remaining challengers Ted Cruz and then Ohio Governor John Kasich out of the race.

Just as Trump seized the Republican mantle, a new CNN poll emerged that highlighted the formidable challenge facing him. It found Clinton, hoping at 68 to become America's first female commander-in-chief, leading the tycoon 54 percent to 41 percent – her largest lead since July.

The former secretary of state, however, suffered a shock loss in Indiana to her challenger, Senator Bernie Sanders, who has pledged to remain in the race until the end despite an extremely steep hill to climb. Clinton has amassed 2,217 delegates – just shy of the 2,383 needed to secure the nomination, according to a CNN tally, while Sanders has amassed 1,443.