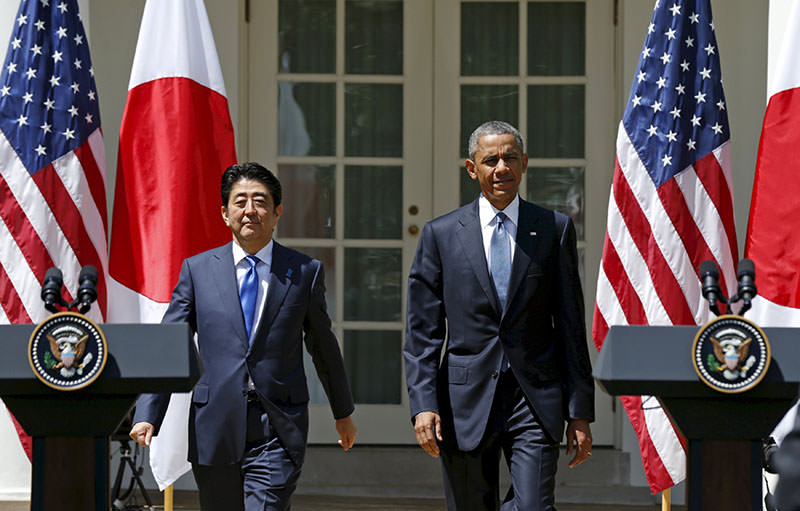 U.S. President Barack Obama and Japanese Prime Minister Shinzo Abe arrive for a joint news conference in the White House in Washington, April 28, 2015 (Reuters)
by May 10, 2016 12:00 am

President Barack Obama will make a historic visit later this month to the Japanese city of Hiroshima on which the US dropped an atomic bomb during World War II, the White House said Tuesday.

Obama will travel to Hiroshima with Japanese Prime Minister Shinzo Abe, following a trip to Vietnam and his final G7 summit in Ise-Shima, Japan.

His visit to Hiroshima will "highlight his continued commitment to pursuing the peace and security of a world without nuclear weapons," the White House said.

Obama will become the first sitting president to visit the memorial.

But the White House said last week that he will not offer an apology for the atomic bombing that killed tens of thousands of residents within seconds on August 6, 1945, and by the end of the year some 140,000 in total had died from injuries related to the blast.

Three days later, on August 9, another atom bomb was detonated over the port city of Nagasaki. Around 40,000 people died on the first day, with 74,000 dead by the end of the year.

In April, US Secretary of State John Kerry became the highest-ranking US official ever to visit the city seven decades after the bomb, when he laid a wreath at the Hiroshima memorial on the sidelines of a G7 foreign ministers' meeting.

On his tenth trip to Asia from May 21-28, Obama will also travel to Vietnam.