There won't be a 'President' Donald Trump, we won't be scared of Muslims or refugees, says George Clooney 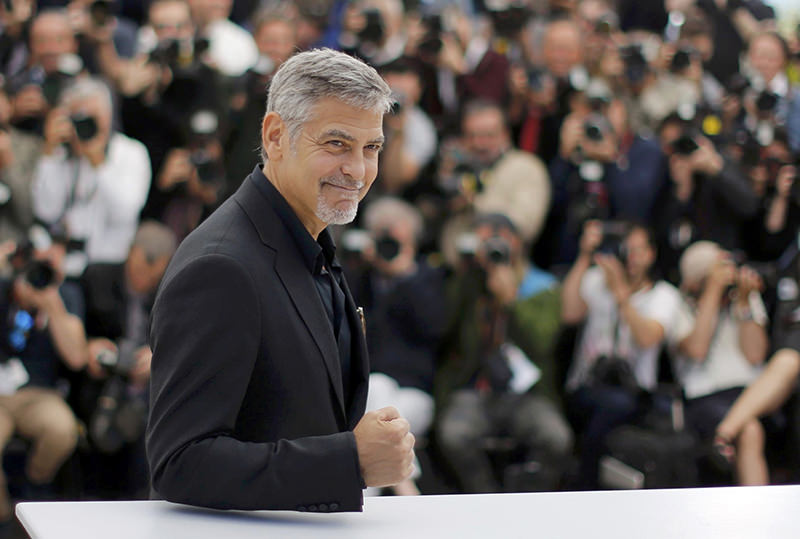 Donald Trump will never be elected U.S. president, George Clooney said Thursday as his a new film tapping into the anger fueling the bombastic tycoon's campaign premiered in Cannes.

"Money Monster", directed by Oscar-winning actress Jodie Foster, is a thundering indictment of casino capitalism starring Clooney as a Wall Street television pundit taken hostage live on air by an "ordinary Joe" who has lost everything on the stock market.

The thriller takes aim not just at the world of finance but also at reality television and rolling news.

Clooney said they had helped destroy real journalism, and blamed them for propelling populist politicians like Trump towards the White House.

"We are not going to be scared of Muslims or immigrants or women. We are not actually afraid of anything."

Trump's campaign has been driven by a string of incendiary comments on Muslims, immigration and women.

"Trump is a result of all the news programmes that don't follow up and ask the questions," said Clooney, who plays a cynical cable news tipster who begins to question himself after a gun is held to his head.

"24 hour news doesn't mean you get more news, you just get the same news more," he claimed.

"They can put up their ratings with an empty podium saying Donald Trump is about to speak rather than take 30 seconds and talk about refugees, the biggest crisis in the world," said Clooney, who has long campaigned to highlight migrants' plight.

"Would all of the corporations fall on their knees if we did actually inform people?" asked the actor who hosted big-ticket fundraisers for Hillary Clinton last month in her bid to win the Democratic nomination for November's election.

"We have lost the ability to tell the truth and get to the facts," he claimed.

Foster, who made her first appearance at Cannes four decades ago when "Taxi Driver" won the Palme d'Or when she was 12, said the film keys into popular fury with the system.

The anger felt by the hostage-taker, played by British actor Jack O'Connell, is "a kind of rage that a lot of people feel about the abuses of technology, and the financial system and how they were left behind."

Asked if that meant the film backed Clinton's rival for the Democratic ticket, Bernie Sanders, Foster said, "I'm not sure if that's a Bernie issue, if anything that's more of a Trump issue."

Foster said the American men she depicted were "struggling with their sense of failure".

"They look for acceptance from these strong women they have disappointed," she said. "They are looking for the values of celebrity and of money in order to give them meaning."

Foster said that "intelligent studio movies" like "Money Monster", which goes on general release this week, "are not being made anymore".

But she insisted the public wanted to see movies "that make them think and feel and don't manipulate them".

As Clooney and co-star Julia Roberts prepared to walk the red carpet for the film's gala premiere, producers in Cannes announced that they are making a feature-length documentary of Thomas Piketty's bestselling critique of the global financial system, "Capital in the 21st Century".

Matthew Metcalfe, who was behind the hit documentaries "Beyond the Edge" and "McLaren", said the film would be closely based on the French economist's tome, which has sold three million copies worldwide.

Foster's "Money Monster" had a mixed reception from industry critics.

The Hollywood Reporter called it a "preppy, upright film", while Variety praised its suspense and humour, and said that despite some odd moments "somehow the film hangs together surprisingly well, thanks to on-point performances from Clooney and Roberts."