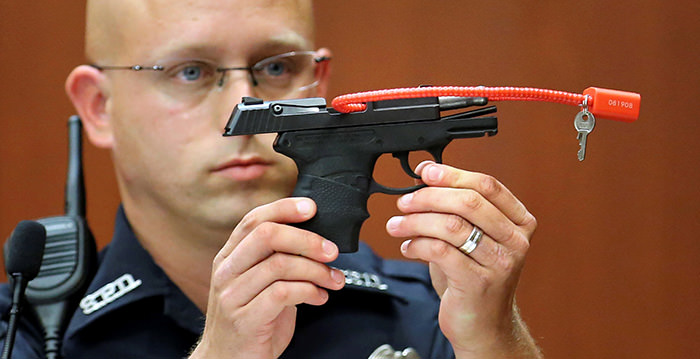 Sanford police officer Timothy Smith holds up the gun that was used to kill Trayvon Martin, while testifying during George Zimmerman's murder trial in Seminole circuit court in Sanford, Florida, June 28, 2013 (Reuters Photo)
by Associated Press May 12, 2016 12:00 am

The pistol that former neighborhood watch volunteer George Zimmerman used in the fatal shooting of Trayvon Martin is going up for auction online.

In an interview with Orlando, Florida, TV station WOFL, Zimmerman said he had just gotten the pistol back from the U.S. Justice Department, which took it after he was acquitted in Martin's 2012 shooting death.

"And I thought it's time to move past the firearm," Zimmerman told the station. "And if I sell it and it sells, I move past it. Otherwise, it's going in a safe for my grandkids and never to be used or seen again."

The auction listing on GunBroker.com lists the gun as a 9 mm Kel-Tec PF-9 pistol. The auction begins at 11 a.m. EDT Thursday and ends at the same time Friday. The bidding starts at $5,000.

The auction listing also says a portion of the proceeds will go toward fighting what Zimmerman calls violence by the Black Lives Matter movement against law enforcement officers, combatting anti-gun rhetoric of Democratic presidential candidate Hillary Clinton and ending the career of Angela Corey, the attorney who led the prosecution against Zimmerman.

The listing ends with a Latin phrase that translates as "if you want peace, prepare for war."

When asked what he thought of people who would be opposed to auctioning the gun, Zimmerman said: "They're not going to be bidding on it, so I couldn't care less about them."

Zimmerman has said he was defending himself when he shot and killed Martin, an unarmed black 17-year-old. The shooting sparked protests and a national debate about race relations.

"The Trayvon Martin Foundation is committed to its mission of ending senseless gun violence in the United States," read a statement an attorney for Martin's family gave the Florida station. "This election season, we are laser focused on furthering that mission. As such, the foundation has no comment on the actions of that person."

Zimmerman said he has received death threats but has decided not to cower.

"I'm a free American," he said. "I can do what I want with my possessions."