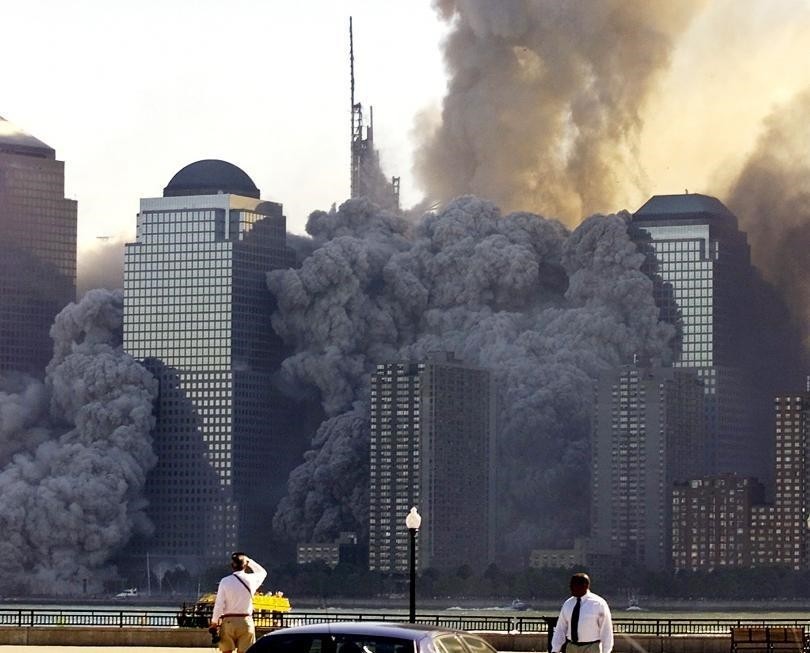 The remaining tower of New York's World Trade Center dissolves in a cloud of dust and debris about a half hour after the first twin tower collapsed. (REUTERS Photo)
by reuters
May 17, 2016 12:00 am

The U.S. Senate passed legislation on Tuesday that would allow families of Sept. 11 victims to sue Saudi Arabia's government for damages, setting up a potential showdown with the White House, which has threatened a veto.

The Saudis, who deny responsibility for the 2001 attacks, strongly object to the bill. They had said they might sell up to $750 billion in U.S. securities and other American assets in retaliation if it became law.

The "Justice Against Sponsors of Terrorism Act," or JASTA, passed the Senate by unanimous voice vote. It must next be taken up by the U.S. House of Representatives, where the Judiciary Committee intends to hold a hearing on the measure in the near future, a committee aide said.

If it became law, JASTA would remove the sovereign immunity, preventing lawsuits against governments, for countries found to be involved in terrorist attacks on U.S. soil. It would allow survivors of the attacks, and relatives of those killed in the attacks, to seek damages from other countries.

In this case, it would allow lawsuits to proceed in federal court in New York as lawyers try to prove that the Saudis were involved in the attacks on the World Trade Center and Pentagon.

Saudi Foreign Minister Adel bin Ahmed al-Jubeir has said his country's objection to the bill is based on principles of international relations. "What (Congress is) doing is stripping the principle of sovereign immunities which would turn the world for international law into the law of the jungle," he said in a statement on Tuesday.

James Kreindler, a prominent trial lawyer who represents 9/11 families and won large payouts for the victims of the 1988 bombing of Pan American Airways Flight 103 over Scotland, said he expected the bill to pass the House and become law.

"It would be crazy for (President Barack) Obama to veto bipartisan legislation (which would) open (U.S.) courts to victims of the worst terrorist attack in U.S. history," Kreindler said.

Senator Charles Schumer, a New York Democrat and a JASTA co-sponsor, said the bill is overdue.

"Today the Senate has spoken loudly and unanimously that the families of victims of terrorist attacks should be able to hold the perpetrators, even if it's a country, a nation, accountable," Schumer told a news conference.

Republican Senator John Cornyn, also a sponsor of the bill, said JASTA does not target the Saudis, although he alluded to a still-classified section of a report on the Sept. 11 attacks that Saudi critics say might implicate Riyadh.

"We have yet to see the 28 pages that have not been yet released about the 9/11 report, and that may well be instructive," Cornyn said at the news conference.

Other lawmakers who have seen the 28 pages have said releasing them would quiet such rumors.

Cornyn said it was up to the court to decide whether the Saudis were liable. "I don't believe that this will be destructive of the relationship that we have with the kingdom of Saudi Arabia," he said.

Asked if Senate Democrats would back a veto, Schumer said he would vote against Obama.

Republican Senator Lindsey Graham, who had opposed the bill, said the version passed on Tuesday eased his worries that it might leave U.S. allies more vulnerable to lawsuits, for example if groups based within their borders but not supported by their governments were behind a terrorist attack.

"We don't want to alienate allies, but we do want to create redress if a nation-state was involved in helping a terrorist organization attack American interests, and I think they should be held liable," Graham said in a brief interview.