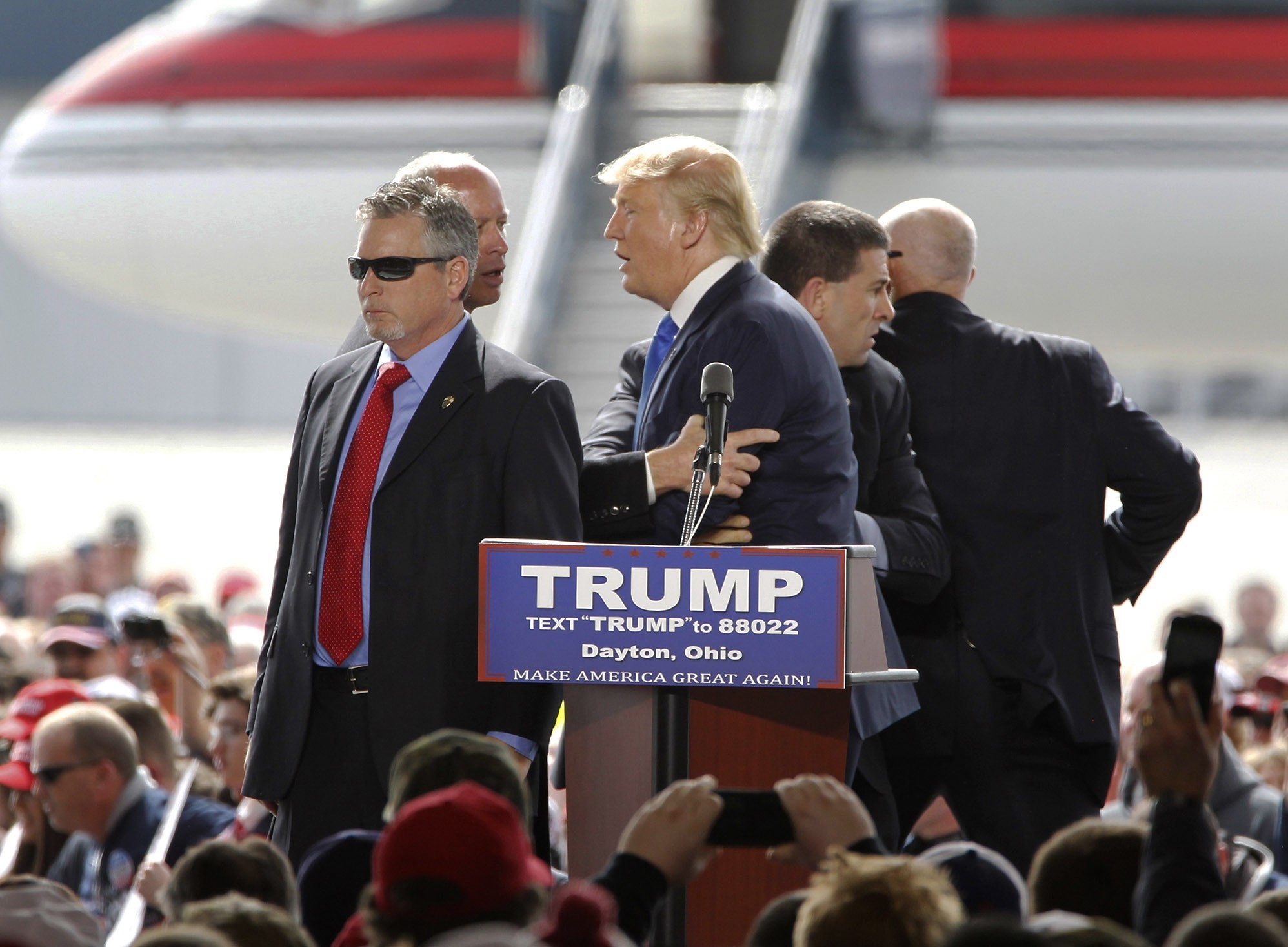 Security surround GOP presidential candidate Donald Trump after a man rushed the stage during a campaign rally at Dayton International Airport in Vandalia, Ohio. (AP Photo)
by Associated Press May 19, 2016 12:00 am
Presumptive Republican U.S. presidential nominee Donald Trump on Wednesday unveiled the names of 11 judges - eight men and three women, all white and all conservative - he would consider, if elected, to replace the late Antonin Scalia on the Supreme Court.

Six of them are judges who were appointed to federal appeals courts around the country by Republican former President George W. Bush. The other five serve on various state supreme courts.

It is unusual for a presidential candidate to release names of potential Supreme Court or Cabinet nominees before winning an election.

But Trump is working to assure conservatives in his own party that, if elected president on Nov. 8, he would not appoint a liberal or moderate to the court. Trump allies had encouraged him to announce the names of potential court nominees in order to allay fears among conservatives wary of a Trump presidency.

Democratic President Barack Obama in March named centrist appellate court judge Merrick Garland to fill the vacancy. But the Republican-led Senate has refused to hold confirmation hearings or a vote, insisting that Obama's successor, to be elected in November, should get to select Scalia's replacement.

Trump said in a statement called the 11 judges "representative of the kind of constitutional principles I value" and said he would use the list as a guide for nominating a justice.

Willett in the past year has posted several comments on Twitter mocking Trump, even referring to him as "Darth Trump," a twist on the "Star Wars" villain Darth Vader. Willett last June posted about imagining Trump selecting a Supreme Court nominee.

"The mind reels. *weeps-can't finish tweet*," Willett wrote, suggesting he was crying at the idea.

Lee is the brother of Republican Senator Mike Lee of Utah, one of the most conservative members of the U.S. Senate.

"I don't know everyone on the list, but those I do know would all be great Supreme Court Justices. Of course I do believe one name on that list stands head and shoulders above the rest," said Mike Lee, a member of the Senate Judiciary Committee that would consider any nomination.

Sykes is the former wife of conservative Wisconsin radio host Charles Sykes, who posted on Twitter that she would make a great justice but added: "I simply don't believe Trump."

White House spokesman Josh Earnest, at his daily briefing, said he would be surprised if any Democrat would describe any of Trump's picks "as a consensus nominee."

"But the individual President Obama has put forward is somebody that Republicans have described as a consensus nominee," Earnest said of Garland, adding that it would be wise for the Senate to act on Obama's nominee.

Trump's list does not include some prominent conservatives who are viewed as Washington insiders and have been mentioned as potential nominees in the past, including appeals court judge Brett Kavanaugh and Paul Clement, a former solicitor general under Bush.

Most of the 11 judges did not respond to requests for comment.

"Joan Larsen is working along with the rest of Michigan's Supreme Court to provide common-sense, rule-of-law justice. That is her focus and will remain her focus," her campaign spokesman Stu Sandler said. Larsen was appointed to the post and is now running for election to a full term.

In March, Trump said he would consult with the conservative Heritage Foundation think tank to compile a list of potential nominees.
RELATED TOPICS