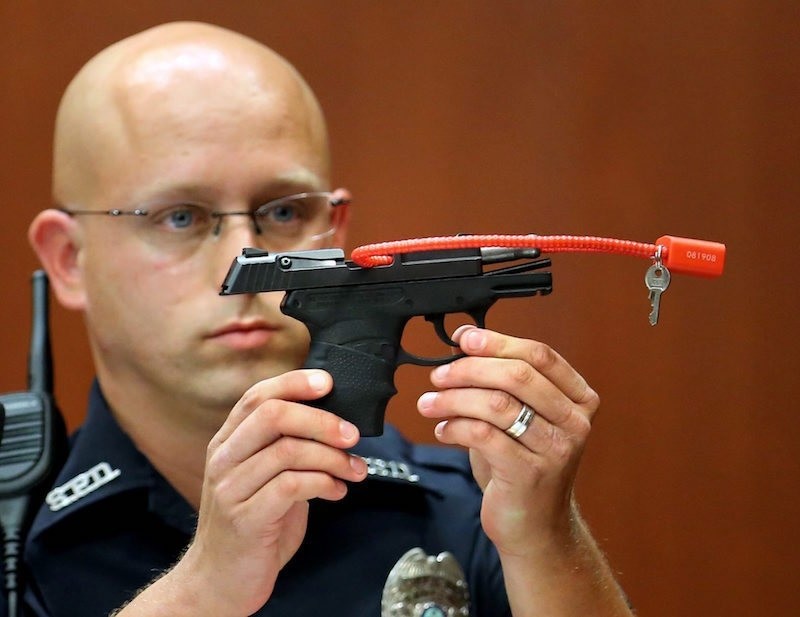 Sanford police officer Timothy Smith holds up the gun that was used to kill Trayvon Martin, while testifying in the George Zimmerman trial. (AP Archive Photo)
by May 22, 2016 12:00 am

A Florida neighborhood watchman has sold for $250,000 the gun he used to kill unarmed black teenager Trayvon Martin, auctioneers said.

United Gun Group, which hosted the auction on its website, confirmed Saturday the amount of the sale of the Kel-Tec PF-9, a 9mm pistol.

The price, also reported by television stations in Nevada and Florida a day earlier, far exceeded the market value of a secondhand weapon.

The very fact that the weapon was even being auctioned off had triggered a major backlash due to the nature of 17-year-old Martin's 2012 shooting.

Watchman George Zimmerman claims he acted in self-defense but the teen's family and friends claimed it was a murder driven by racism.

Zimmerman's trial and subsequent acquittal exposed deep racial divides in US society, and nationwide protests erupted over the shooting.

The TMZ celebrity news website said the winning bid was a last-minute one, denying a Florida bar owner to own for $150,000 what Zimmerman has called an "opportunity to own a piece of American history."

The sale ends 10 days of a drawn-out process that first saw Zimmerman try to auction off the weapon on GunBroker.com, which promptly removed the post, before turning to United Gun Group.

Hoax buyers then managed to temporarily curtail the sale by posting fake bids of more than $65 million, including some by a bidder using the screen name "Racist McShootface."

After filtering out fake buyers, United Gun Group opened a second auction that led to the final sale.

While serving as a neighborhood watch volunteer in a gated community in Florida, Zimmerman fatally shot high school student Martin as he was walking home with iced tea and candy in February 2012.

Zimmerman insisted he had been following the teenager on suspicion he was involved in robbery, and that he shot him in an act of self-defense.

He was acquitted of second-degree murder the following year, setting off protests nationwide over Florida's "stand your ground" gun laws.

In announcing the sale, Zimmerman had said that a portion of the proceeds would serve to "fight BLM (Black Lives Matter) violence against law enforcement officers."