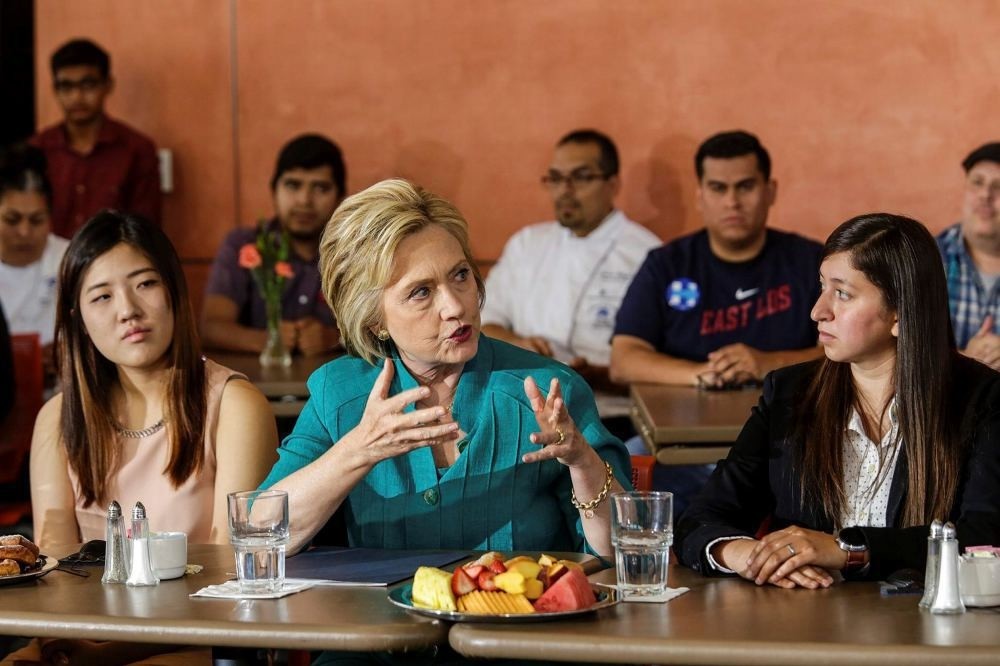 While the U.S. is experiencing unprecedentedly contentious presidential campaign, Democrat candidate Clinton blasted Republican candidate Trump and said electing him would be a historic mistake for the country

Hillary Clinton's savage takedown of Donald Trump in her recent foreign policy speech has her supporters fired up. As the likely Democratic nominee toured California Saturday, crowds burst into applause at the mere mention of Thursday's speech, in which Clinton cast Trump as dangerously unqualified to be president. Supporters say they feel more confident and excited in the wake of the address — which could benefit Clinton, who has struggled to inspire enthusiasm throughout the drawn-out primary contest. "I loved it. I was waiting for that," said Leslie Milke, 56, of Woodland Hills, a professor at Los Angeles Mission College, who saw Clinton. "I knew she was capable of that kind of speech....It really made me feel energized. It made me feel like we can win." Clinton's speech in San Diego previewed her intention to mount an aggressive campaign against the real estate mogul. In it, she said Trump would lead the nation toward war and economic crisis, contrasting it with her long years of diplomatic experience and public service. Looking to the November general election, Clinton, who is expected to clinch the Democratic nomination in the coming days, said that electing Trump would be a "historic mistake." Since then Clinton has only increased the heat. "I think it is time to judge Donald Trump by his words and his deeds. I think his words and his deeds disqualify him from being president," Clinton said in Oxnard, Calif., on Saturday. She later mockingly cited some of Trump's past remarks, saying: "One of my personal favorites is he said he knows how to deal with Putin because he took the Miss Universe pageant to Moscow."

Later in the day, a raucous crowd of more than 1,400 in Fresno started chanting "Hillary, Hillary," when Clinton mentioned her speech. "Donald Trump is not qualified or temperamentally fit to be president of the United States," Clinton said amid applause. As she shifted her focus almost entirely to the presumptive Republican nominee, her rival Bernie Sanders continued his quest for the Democratic nomination, defiantly declaring Saturday that Clinton will not have enough pledged delegates after Tuesday's contests, and the Democrats are headed toward a contested summer convention. Still, Clinton supporters like Walter Guzman, 44, of Oxnard, said it was time for her to turn to Trump, saying "she needs to stop concentrating on Bernie and start concentrating on Trump." Of course, engaging with Trump, who has shown little restraint with negative campaigning and is skilled at sucking up media attention, has its risks. Many of Trump's GOP primary opponents sought to take him on unsuccessfully, most notably Sen. Marco Rubio, whose Trump attacks were viewed as out of keeping with his inspirational message. Sandy Emberland, 72, of Thousand Oaks, said she knew the race was "going to be dirty and bad," but said "I think she will stay above the fray." Meanwhile, Sonia Prince, 60, of North Oxnard, said that while she is confident Clinton can fight fire with fire, she'd prefer not to hear about Trump at all. "Because bad publicity or good publicity, it's publicity for him," she said.

Meanwhile, the disputes between Clinton and the other Democrat candidate Bernie Sanders continue. Nearing the end of the primary season, a defiant Bernie Sanders predicted Saturday that the Democratic presidential process would lead to a contested summer convention against Hillary Clinton, pushing back against the likelihood that the former secretary of state will soon declare victory. Speaking to reporters three days before the California primary, Sanders showed few signs of surrender, vowing to take his bid to the Philadelphia convention in July. He urged news organizations not to anoint Clinton as the presumptive nominee through a combination of pledged delegates and superdelegates. "It is extremely unlikely that Secretary Clinton will have the requisite number of pledged delegates to claim victory on Tuesday night," Sanders said. "Now I have heard reports that Secretary Clinton has said it's all going to be over on Tuesday night. I have reports that the media, after the New Jersey results come in, are going to declare that it is all over. That simply is not accurate."

By nightfall, Sanders was rallying supporters outside the entrance of the Los Angeles Memorial Coliseum, where he pointed to his differences with Clinton on super PACs, the federal minimum wage and the Iraq War. "Hillary Clinton wants small, incremental changes. We want to transform this nation," Sanders said as the Coliseum's flaming cauldron torch lit up the sky. Sanders told reporters by the end of the primaries on June 14 neither candidate would have enough pledged delegates to declare victory and would be dependent upon superdelegates to reach the magic number. "In other words, the Democratic National Convention will be a contested convention," he said.

Clinton currently leads Sanders among pledged delegates by a count of 1,769 to 1,501, an edge of 268 pledged delegates. An Associated Press count of superdelegates shows Clinton leading 547 to 46. Clinton is currently 67 delegates short of clinching the nomination through the combination of the two and is poised to cross that threshold in the coming days.
RELATED TOPICS