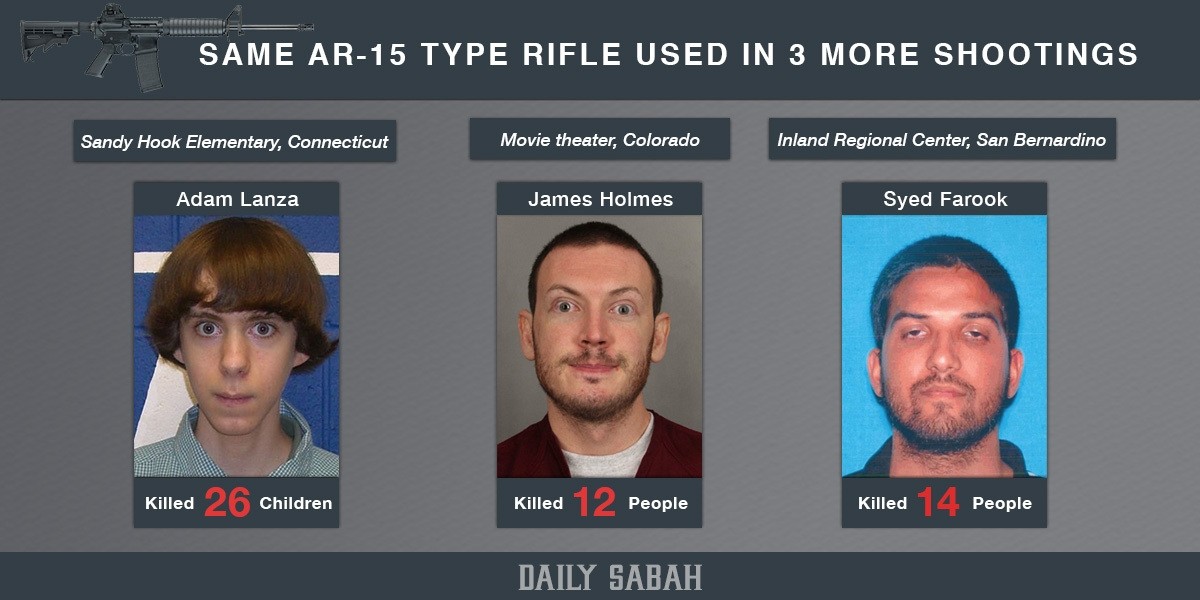 As people grieve for the 50 people who were killed in a nightclub in Orlando in the worst attack on U.S. territory since Sept. 11, 2001, it has been revealed that the type of rifle used was the same as in three other shootings in the country

The weapon increasingly being used to commit mass murderers in the U.S. added a new chapter to its bloody history early Sunday morning when a man opened fire at a gay nightclub in Orlando, claiming at least 50 lives, as the people of Orlando grieved the dead and public figures condemned the attack.

The weapon used by Omar Mateen, 29, in what has been described as the deadliest mass shooting in U.S. history was none other than a variant of the now infamous AR-15. The assault rifle was last used in a mass shooting in December 2015 at the Inland Regional Center in San Bernardino, California when a self-radicalized married couple named Tashfeen Malik and Syed Farook used illegally modified versions of the gun to open fire on a holiday party, killing 14 and wounding 21.

In July 2012, James Holmes opened fire on a movie theater in Colorado in 2012 and killed 12 victims. One of the weapons found in his arsenal was an AR-15 variant. In December 2012, Adam Lanza used an AR-15 purchased by his mother to kill 20 first graders and six staffers at the Sandy Hook elementary school in Connecticut before taking his own life with a Glock pistol.

DAESH on Monday claimed responsibility for the Orlando shooting that killed 50 people, saying in a radio bulletin that it was carried out by "one of the soldiers of the caliphate."

"God allowed Omar Mateen, one of the soldiers of the caliphate in America, to carry out an attack entering a crusader gathering in a night club... in Orlando in Florida, killing and wounding more than 100 of them," a bulletin from Al-Bayan radio said.

On Sunday evening, many relatives kept anxious vigils at the bedsides of wounded loved ones at Orlando Regional Medical Center. Kyle Brown, 21, was among many young people out on the streets of Orlando on Sunday night. "We came to show our support, to show our compassion to every victim," he told dpa. He dismissed those associating the attack with the Muslim community. "You should not categorize a whole group of people, you should not be biased towards a group of people because of what one person is doing."

The FBI and other law enforcement authorities were poring over evidence that could explain the motives for the rampage in Orlando, Florida, a massacre that President Barack Obama denounced as an act of terror and hate. "We know enough to say that this was an act of terror and an act of hate," Obama said, as the FBI investigated the shooter.

The gunman, Omar Mateen, a New York-born Florida resident and U.S. citizen who was the son of Afghan immigrants, was shot and killed by police who stormed the club with armored cars after a three-hour siege. Mateen, 29, was an armed guard at a gated retirement community, and had worked for the global security firm G4S for nine years.

His father said on Sunday his son was not radicalized, but indicated Mateen had strong anti-gay feelings. His ex-wife described him as mentally unstable and violent toward her.

Terrified survivors described how the gunman raked clubgoers with bullets, prompting a police SWAT team to storm the venue. Mateen was born to Afghan parents in New York in 1986 and lived in Port St Lucie, Florida, about a two-hour drive from Orlando.

U.S. anti-terror strategy came under fresh scrutiny as it has been revealed that Mateen had been twice questioned by FBI agents in 2013 and 2014 after making comments to co-workers about supporting militant groups, but neither interview led to evidence of criminal activity.

Asked how Mateen had been able to hold a Florida gun license and to legally purchase two guns shortly before the attack, Hopper said simply that the investigation into his supposed radical ties had been "inconclusive."

Democratic flag-bearer Hillary Clinton postponed a joint campaign rally with Obama and tweeted that her "thoughts are with those affected by this horrific act." Her Republican rival Donald Trump lost no time in claiming the attack proved he was right to promise a ban on Muslims entering the U.S.

Trump demanded Obama resign for failing to publicly blame the massacre on "radical Islam," and vowed to make a speech on security policy Monday. "If we do not get tough and smart real fast, we are not going to have a country anymore," Trump declared.

The massacre - which coincided with Gay Pride month in the United States - cast a long shadow over the parade in Los Angeles. Chillingly, a man was arrested in nearby Santa Monica with weapons and explosives in his car. Police said he had no known connection to the Orlando bloodshed.

The mass shooting in Orlando was the deadliest terrorist attack in the United States since Sept. 11, 2001. Meanwhile, the names of victims were being released on Monday, who were aged between 20 and 50.

The gun has become a flashpoint of its own for America's never-ending debate on gun control, particularly the legal classification of assault-style rifles. And proposed bans on the weapons have only increased purchases. A 10-year ban expired in 2004 and lawmakers chose not to renew it. The weapons make it relatively easier for attackers to shoot more people in less time, and data compiled by the Mother Jones online news magazine show that of the 10 shootings with the highest number of casualties, which includes killed and wounded, assault rifles were used in seven of them.

All of this is compounded by America's relatively lax gun laws. Most states do not require background checks to purchase a firearm at a gun show, nor do most states require the buyer of a gun to present identification when purchasing from a private seller. Currently, a law prohibits gun manufacturers from civil lawsuits "resulting from the misuse of their products by others."