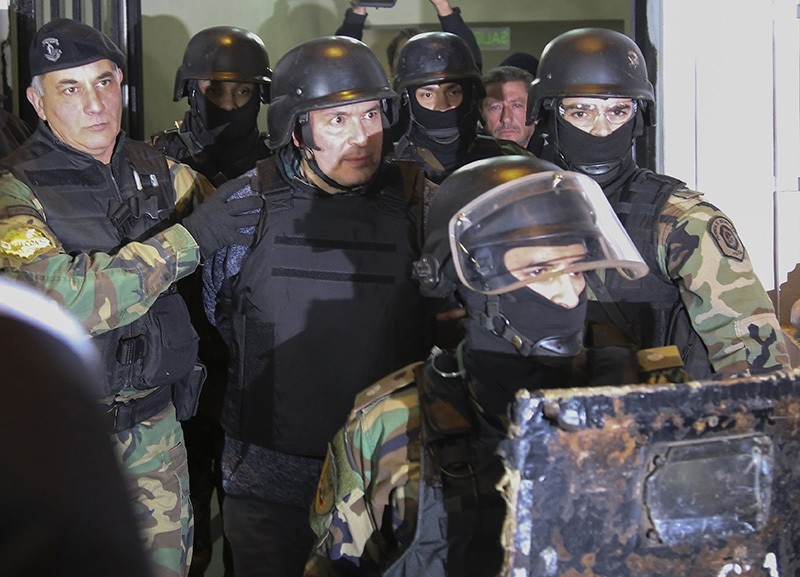 Jose Lopez (C) is taken into custody after being arrested in General Rodriguez, province of Buenos Aires on June 14, 2016 while he was trying to hide 160 packages with more than eight million dollars in the garden of a nunnery. (AFP Photo)
by Associated Press
Jun 15, 2016 12:00 am

An official in the former government of President Cristina Fernandez was arrested on Tuesday as he allegedly tried to hide millions in dollars and other currencies at an Argentine monastery.

A neighbor of the monastery called authorities after seeing a man throwing bags onto the property near Buenos Aires early Tuesday. Officers arrived and arrested a man who turned out to be former Public Works Secretary Jose Lopez. Police initially detained him for possession of a .22 caliber rifle. 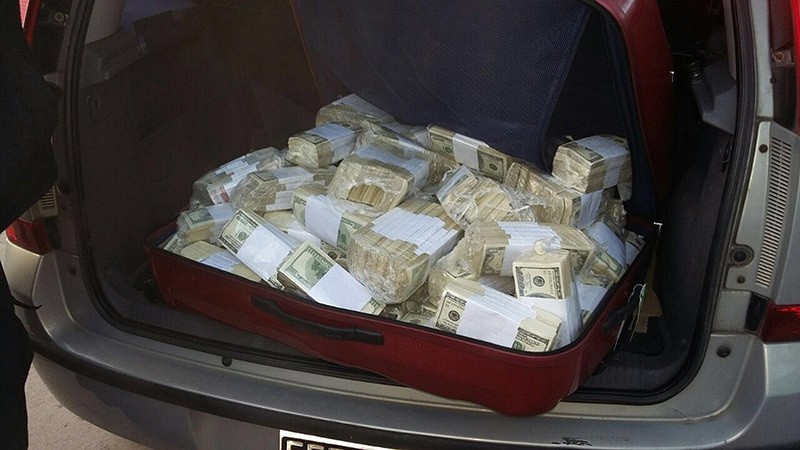 They then discovered wads of cash as well as the watches in more than 160 packages inside the bags. Other money had been taken to the monastery kitchen and some was found in the trunk of a car.

Security Minister Cristian Ritondo of Buenos Aires Province told a news conference that 55-year-old Lopez was "in a state of shock" when he was arrested and alleged that he tried to bribe police.

"He later told the nuns that police had tried to steal the money that he was trying to donate," Ritondo said. "There are dollars, yen, euros and a currency from Qatar ... It's a lot of money." He did not give an exact amount because the money was still being counted.

Dario Kubar, the area's mayor, told reporters earlier Tuesday that authorities had found more than $7 million at the monastery that is home to nuns devoted to Our Lady of the Rosary of Fatima, which is about 35 miles (55 kilometers) west of the capital, Buenos Aires. The news became a trending topic on Twitter in Argentina. Local TV stations showed images of the piles of cash, and later of Lopez being escorted by police to another precinct wearing a helmet and a bulletproof vest.

"It's almost out of a movie," said Marcos Pena, President Mauricio Macri's Cabinet chief. "We're shocked because it's not a minor official ... He led public works, which were so questioned, where we saw so much daily corruption."

It's "shameful," Macri said during a public event on Tuesday. "We are all surprised. We are clearly changing and it's good that we shed light on the types of practices that we want to eradicate in Argentina."

Since Fernandez ended her term in December, Macri's administration has promised to root out corruption that has plagued Argentina. Analysts say that has emboldened judges who are now freer to pursue sensitive cases against the former leader and her friends without fear of retribution. Fernandez has been included in investigations involving allegations of money laundering and possible illegal enrichment.

Lazaro Baez, a once seemingly untouchable friend of Fernandez and her husband and predecessor, Nestor Kirchner, was arrested earlier this year. The millionaire businessman, who got public works contracts under both presidents, is accused of embezzling and laundering about $5 million. Prosecutors began looking into Baez after a 2013 journalistic investigation named him as Kirchner's figurehead in an elaborate scheme.

Prosecutors have also said they are looking into the financial transactions at several hotels owned by the Kirchner family in the southern province of Santa Cruz, where Fernandez has lived since leaving office.

"Our most energetic condemnation against the shameful actions of Jose Lopez," opposition lawmaker Juan Manuel Abal Medina, who served as Cabinet chief under Fernandez, said on Twitter.

"Corruption is stealing from all, especially those who have the least."