Orlando shooting puts spotlight on gun control debate in US 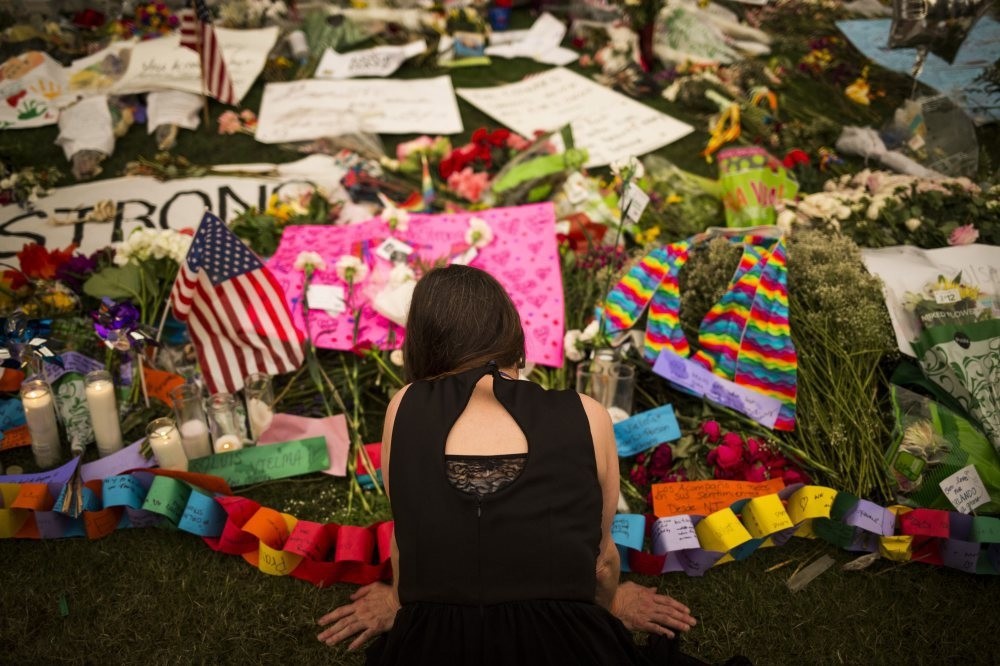 A woman visits a memorial in honor to the victims of the Orlando mass shooting outside the Dr. Phillips Center for the Performing Arts in Orlando, Florida, June14.
by Compiled from Wire Services Jun 16, 2016 12:00 am

The mass shooting in Orlando has set off a new round of debate over counter terrorism and gun control laws. The U.N. human rights chief called on the U.S. to bring in 'robust gun regulations' to prevent more mass killings

As thousands gathered for vigils across the U.S. in memory of the 49 people killed at a Florida gay nightclub, public figures and activists have addressed gun control measures in the country.

The U.N.'s human rights chief on Tuesday called on the United States to bring in "robust gun regulation" in order to prevent the kind of mass killing seen in Orlando, Florida over the weekend.

Zeid Ra'ad Al Hussein urged Washington to live up to its obligations to protect its citizens from the "horrifyingly commonplace but preventable violent attacks that are the direct result of insufficient gun control." Gunman Omar Mateen killed 49 people and wounded another 53 before he was killed when police stormed the Pulse, one of Orlando's most prominent gay venues, early Sunday.

"It is hard to find a rational justification that explains the ease with which people can buy firearms, including assault rifles, in spite of prior criminal backgrounds, drug use, histories of domestic violence and mental illness, or direct contact with extremists - both domestic and foreign," Zeid said in a statement.

"How many more mass killings of schoolchildren, of co-workers, of African-American churchgoers... will it take before the United States adopts robust gun regulation?" he asked.

He refuted the kind of justification for easy access to arms propagated by the likes of the U.S. National Rifle Association (NRA), whose members argue that the bad guys will always get hold of guns so the good guys should have them too.

According to official figures, more than 9 million guns and other firearms were manufactured in the United States in 2014, compared with only 5.5 million in 2009, the year Obama first took office.

The year of his re-election, in 2012, marked a banner year for the sector, with sales jumping nearly 19 percent, according to a study by research firm IBISWorld.

Donald Trump and Hillary Clinton also outlined dramatically different proposals for combating terrorism and gun violence following the deadly Orlando nightclub attacks, with the presumptive Republican nominee vowing to suspend immigration from countries with a history of terrorism and the Democratic candidate warning against demonizing Muslims.

Trump redoubled his previous call for a temporary ban on Muslims coming to the U.S., saying that policy would stay in place until the government can "properly and perfectly" screen immigrants. Going further, he also said he would use presidential discretion to "suspend immigration from areas of the world where there's a proven history of terrorism against the United States, Europe and our allies."

Clinton called for tougher gun control legislation in the U.S., including outlawing assault weapons like one used by the Orlando shooter. "I believe weapons of war have no place on our streets," Clinton said. Though she drew implicit contrasts with Trump, she never mentioned him by name, saying "Today is not a day for politics."

Clinton reiterated her call for tougher gun control measures, a policy proposal that has been a centerpiece of her presidential campaign. In addition to her support for an assault weapons ban, she also said Americans should be able to agree that "if the FBI is watching you for a suspected terrorist link, you shouldn't be able to just go buy a gun with no questions asked."

The FBI said Mateen had come to its attention twice, but the investigations did not reveal any definitive links to terror groups or plots. Mateen purchased at least two firearms legally within the past week or so, according to federal authorities.
RELATED TOPICS