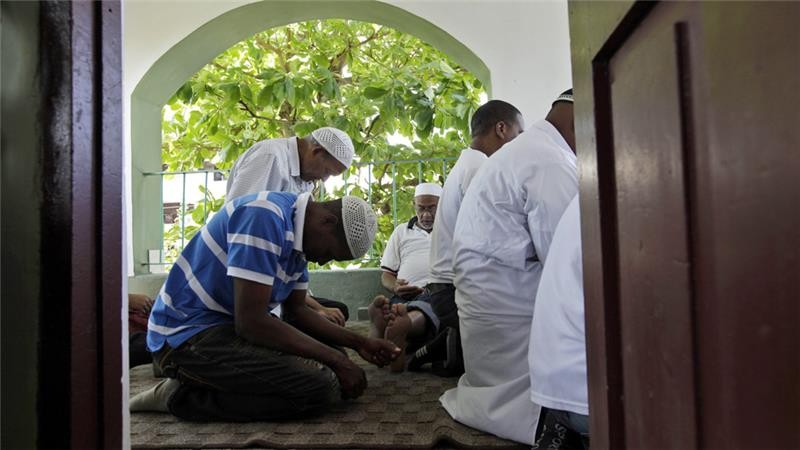 In Havana's old quarter, one can see a green and white minaret atop an old colonial-style building. It is here that Cuban Muslims have gathered for the past year to pray. Inside, the walls of the prayer hall are decorated with Arabic calligraphy and a Palestinian flag. The copies of the Quran have been translated into Spanish

They speak little Arabic and don't have a real mosque, but Cuba's small Muslim community practices the faith and will quietly mark the end of Ramadan as best they can.

"Salam alaykum," says Javier, smiling as he welcomes visitors in Arabic on a hot summer afternoon.

Javier was born into a Catholic family but converted to Islam two years ago. "The text of the Bible seemed incomplete to me, so I changed religion," Javier said about his decision - an unusual one in a country where 70 percent of the population observes a blend of Christianity and Afro-Cuban beliefs.

There are as many as 10,000 Muslims in Cuba, making up less than 0.1 percent of the island nation's population. According to experts, Islam was introduced to Cuba by Muslim students who came from countries such as Pakistan in the 1970s and 80s.

"Tourists often come through this street and they are so surprised when they realize they are looking at a mosque," said Ahmed Aguelo, who converted to Islam 17 years ago and runs the prayer hall where some 200 worshippers gather for Friday prayers.

"I am not officially an imam, as there is no training course here," he said. "But I know the basics." A few hundred meters away, a sign advertises the construction of a purpose-built mosque on a 2-hectare (5-acre) piece of land. Turkish President Recep Tayyip Erdoğan promised it to Cuba in February 2015. In June 2015, the Cuban government gave the go-ahead for the inauguration of the prayer hall in the heart of Old Havana as "Cuba's first mosque."

"We write 'mosque' at the entrance because it works like one," said Rigoberto Menendez, director of Arab House, which is behind the mosque project. "A real mosque would have more space [but] the main thing is for Muslims to be able to come together in one place."

Cuba's Muslims have been clamoring for their own house of worship for 25 years. "We would meet in apartments around the city," said Pedro Lazo Torres, who converted in 1988 and is considered Cuba's first Muslim. "I can practice my religion totally freely in Cuba."

It can be difficult being an observant Muslim in Cuba during the holy month of Ramadan. Tradition holds that Muslims break their obligatory fast by eating dates, but in Cuba there aren't any.

"Everything is imported. The Saudi embassy supplies us with dates, traditional garments, 'halal' meat. With the help of God, we get by," said Lazo Torres, who goes by the name Yahya.

Alen Garcia, a 33-year-old of African descent, said he gave up a lot when he converted to Islam. "I lost friends when I told them I wanted to become a Muslim. To convert was to renounce drinking rum, eating ham, going to parties and dancing salsa," he said. "In other words, it meant renouncing much of Cuban culture."

There are no Arabic courses at Cuban universities. Garcia explained that Arabic-speaking students from Chad, Afghanistan and Libya who attend the Latin American School of Medicine here give Cuban Muslims free classes in the language of the Quran. The Cuban Muslims also study Arabic with apps they can use offline.

As the time approaches to break the day's fast, the prayer hall fills. Children play and squirm on the side of the room reserved for their mothers, who wear veils.

The man who distributes food is named Leonel Diaz, but he goes by Mohamed. He converted at age 73. "It is never too late to welcome a good thing," he said.

He agrees to discuss Guantanamo, the U.S. prison for terror suspects that opened at a US-held base in eastern Cuba after the Sept. 11, 2001 attacks. "States must find a solution to close this prison," he said.

He noted that Colombia is close to reaching a peace accord with the leftist rebel group FARC after a half century of war.

"I would like the same agreement for the Muslims who are held in Guantanamo," said Diaz.

Yaquelin Diaz, who goes by the Islamic name Aisha, lived in Spain for eight years and it was there that she converted, thanks to a Pakistani brother-in-law.

"Because of our habits, lots of people think we are foreigners. They cannot imagine that there are Muslims in their country. But Islam is expanding in Cuba." Aisha said the only thing missing in Cuba is a shop that sells religious garments.

"Our brothers from Saudi Arabia give them to us, but we cannot keep living off their charity. We need our own stores, in our own style. We must be able to promote Islam in Cuba."

After the Cuban Revolution of 1959, Cuba became an officially atheist state and limited practice of all religions. But over time the restrictions eased. Cuba became a secular state with a constitutional reform carried out in 1992, Menendez said. Ahmed, the imam, adds: "Everything can evolve over the course of a country's history. Look, the United States killed thousands of blacks in the last century. And now it has a black president."
RELATED TOPICS