US steps up security for 4th of July over terror fears, gun violence 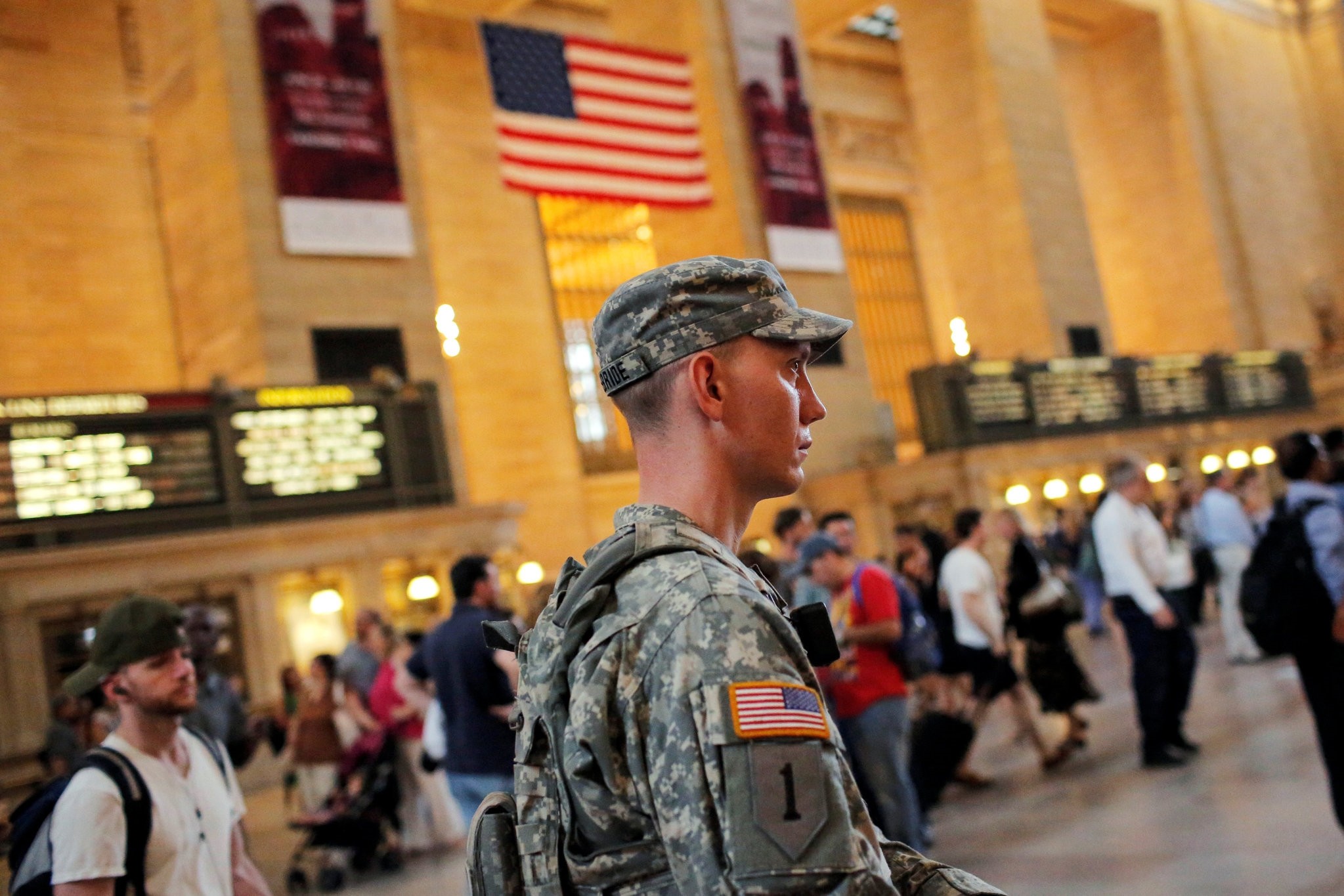 A member of the U.S. Army National Guard monitors commuters at Grand Central Station as security increases leading up to the Fourth of July weekend in Manhattan, New York, U.S., July 1, 2016. (REUTERS Photo)
by Jul 04, 2016 12:00 am

The United States celebrated the July Fourth holiday on Monday with parades, baking contests and picnics draped in red, white and an extra layer of blue, as police ramped up patrols amid concerns about terrorism and gun violence.

Millions of Americans marked independence from Britain with celebrations as boisterous as a music-packed party by country music legend Willie Nelson for 10,000 people at a race track in Austin, Texas and as staid as colonial-era costumed actors reading the Declaration of Independence at the National Archives in Washington.

"It's a good day for reflecting on the positive things about America - the sense of freedom that you can go after and achieve whatever you want," said Helen Donaldson, 48, the mother of a multi-ethnic family of four adopted teens living in Maplewood, New Jersey.

Donaldson, a white Australian immigrant, cheered with her two New Jersey-born African American daughters, both 12 and dressed in white, white and blue, as a recording of the Star Spangled Banner played to kick off a children's relay race. Nearby, in the baking contest tent, 13-year-old Nate Fisher entered his cherry blueberry tart into competition.

"I have high hopes," he said, flashing a smile.

History may be in the making in the traditional hotdog-eating contest at New York's Coney Island. Joey "Jaws" Chestnut - a world record holder who ate 69 hotdogs in 10 minutes - attempts to regain his Mustard Yellow International Belt from Matt Stonie, who last year ended Chestnut's run of eight straight victories.

With the holiday taking place days after attacks in Baghdad, Dhaka and Istanbul, the New York Police Department deployed eight new "vapor wake" dogs, trained to sniff out explosives on a moving target in a crowd. Commissioner Bill Bratton said on Friday there was no specific threat to New York City.

The department's presence this holiday will be increased by nearly 2,000 new officers just days after they graduated on Friday from the New York City Police Academy.

"As we always have the capacity in New York to put out a lot of resources, that's the name of the game, in dealing with terrorist threats," Bratton said.

Police in Chicago, which has seen a spike in gun murders this year, announced a stepped up presence with more than 5,000 officers on patrol over the long weekend, traditionally one of the year's most violent, said Chicago Police Superintendent Eddie Johnson. Local media reported on Friday that 24 people had been shot over the past 24 hours, three fatally.

Dry weather forecasts across the country thrilled fireworks lovers, although some spots in Michigan have been so rain-starved that pyrotechnic shows were canceled in a handful of communities near Detroit to prevent fires.

Over the weekend in New York, an incident being investigated as a possible fireworks mishap severely injured an 18-year-old Virginia man who stepped on an explosive in Central Park, police said. Police had previously given his age as 19.

In Compton, California, a 9-year-old girl's hand had to be amputated when she was injured after unwittingly picking up a lit firework, local media said.

Some of America's newest citizens were being sworn in at a special Independence Day ceremony in New Orleans for 55 people from countries including Haiti, Nepal and Venezuela.

More than 7,000 people will have been naturalized during almost 100 such ceremonies organized by U.S. Citizenship and Immigration Services between June 30 and July 4, the agency says.

"These new Americans will strengthen the fabric of our nation," USCIS Director Leon Rodriguez said in a statement.