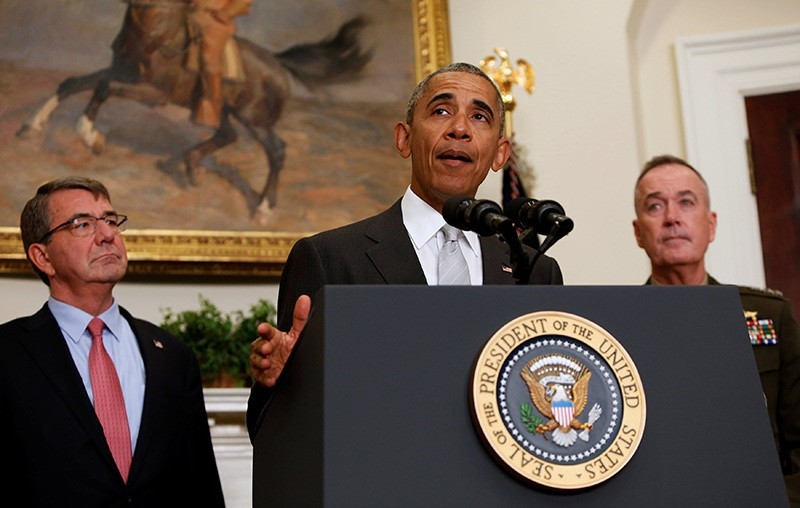 U.S. President Barack Obama, surrounded by Secretary of Defense Ash Carter (L) and the Chairman of the Joint Chiefs of Staff Gen. Joseph Dunford, Jr., delivers a statement from the Roosevelt Room at the White House, July 6, 2016. (Reuters Photo)
by Compiled from Wire Services Jul 06, 2016 12:00 am

President Barack Obama, saying the Afghan security situation remained precarious, announced on Wednesday that he would keep U.S. troop levels in the country at 8,400 through the end of his administration rather than reducing them to 5,500 by year's end.

Obama, in a statement to the press at the White House along with Defense Secretary Ash Carter and the Joint Chiefs of Staff chairman, Gen. Joseph Dunford, said the role of U.S. forces in Afghanistan would remain unchanged, training and advising Afghan police and troops, and supporting counterterrorism missions against the Taliban and other groups..

The numbers reflect a compromise between Obama's original plan and what many military commanders had recommended.

His decision fixes the number of troops who will remain in Afghanistan through the end of his presidency.

Obama had planned to drop troop levels from 9,800 to 5,500 troops by the end of 2016. But Taliban resurgence has forced Washington to rethink its exit strategy.