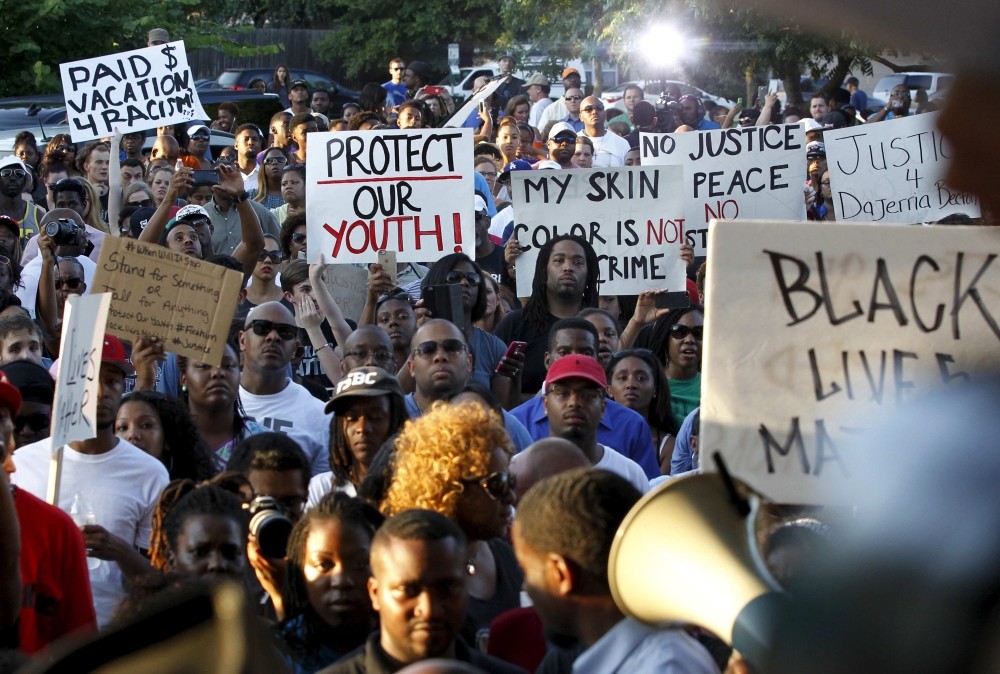 The killing of two black men by police in Minnesota and Louisiana has raised tensions and anger in the U.S. at the increase in black people suffering from racist treatment, police brutality and arbitrary killings

A Minnesota officer fatally shot a man in a car with a woman and a child, an official said, and authorities are looking into whether the aftermath was livestreamed in a widely shared Facebook video, which shows a woman in a vehicle with a man whose shirt appears to be soaked in blood telling the camera "police just shot my boyfriend for no apparent reason." St. Anthony Police interim police chief Jon Mangseth said the incident began when an officer pulled over a vehicle around 9 p.m. Wednesday in Falcon Heights, a St. Paul suburb that Mangseth's department serves. Mangseth said he did not have details about the reason for the traffic stop, but that at some point shots were fired. The man was struck but no one else was injured, he said. As word of the shooting and video spread, relatives of the man joined scores of people who gathered at the scene of the shooting and outside the hospital where the man died and identified him as Philando Castile of St. Paul, a 32-year-old cafeteria supervisor at a Montessori school. Speaking to CNN early Thursday, Castile's mother said she suspected she would never learn the whole truth about her son's death. "I think he was just black in the wrong place," Valerie Castile said, adding that she had underlined to her children to that they must do what authorities tell them to do to survive. Police have not released details on the ethnicity or service record of the police officer involved but to say he has been placed on paid administrative leave. "I know my son ... we know black people have been killed ... I always told them, whatever you do when you get stopped by police, comply, comply, comply."

Police use of force, particularly against minorities, has returned to the national spotlight since the video-recorded fatal shooting earlier this week of 37-year-old Alton Sterling by police in Baton Rouge, Louisiana. The U.S. Justice Department on Wednesday launched a civil rights investigation into the shooting, which took place after Sterling, who was black, scuffled with two white police officers outside a convenience store. Castile's cousin, Antonio Johnson, told the Star Tribune that he believed that because Philando Castile was a black man driving in Falcon Heights, a largely middle-class suburb, he "was immediately criminally profiled and he lost his life over it tonight." The site of the shooting in Falcon Heights is close to the Minnesota State Fairgrounds and not far from a clutch of fields associated with the University of Minnesota's agricultural campus.

Late Wednesday, protesters moved to the governor's mansion in nearby St. Paul, where around 200 people chanted and demanded action from Democratic Gov. Mark Dayton. By daybreak Thursday, around 50 protesters remained outside the mansion despite a light rain. The video posted Wednesday night on Facebook Live appears to show the aftermath of a shooting like the one described by Mangseth. It shows the woman in a car next to a bloodied man quietly slumped in a seat. The woman describes being pulled over for a "busted tail light" and her boyfriend being shot as he told the officer that he was carrying a pistol and was licensed. A clearly distraught person who appears to be an armed police officer stands at the car's window, telling the woman to keep her hands where they are and intermittently swearing. The Associated Press couldn't immediately verify the authenticity of the video. Mangseth said he was "made aware there was a livestream on Facebook" but that he had not yet seen the video and didn't know anything about its contents. The woman in the video says the man she identified as her boyfriend was reaching for his ID and wallet when the officer shot him. Police said in a statement that a handgun was recovered from the scene. The officer tells her to keep her hands up and says: "I told him not to reach for it. I told him to get his hand out." "You shot four bullets into him, sir. He was just getting his license and registration, sir," the woman responds.

The video goes on to show the woman exiting the car and being handcuffed. A young girl can be seen and is heard saying at one point, "I'm scared, Mommy." The woman describes being put in the back seat of the police car and says, "The police just shot my boyfriend for no apparent reason." Clarence Castile spoke to the Star Tribune from the Hennepin County Medical Center, where he said his nephew died minutes after arriving. He said Philando Castile had worked in the J.J. Hill school cafeteria for 12 to 15 years, "cooking for the little kids." He said his nephew was "a good kid" who grew up in St. Paul. Minnesota court records online show Castile had some misdemeanor violations, mainly related to driving. Mangseth said the Minnesota Bureau of Criminal Apprehension has taken over the investigation. A spokesman for that agency couldn't immediately be reached.

The president of the Minneapolis NAACP, Nekima Levy-Pounds, told the crowd she has no faith in the system in the wake of this and other police shootings of black men, including last year's killing of Jamar Clark in Minneapolis. Levy-Pounds was a leading voice during the protests outside a police station that followed Clark's death, as well as during a renewed wave of protests after prosecutors decided not to charge the officers involved. "I'm tired of the laws and policies on the books being used to justify murder," Levy-Pounds, a civil rights attorney, told the crowd as rain began to fall. "This is completely unacceptable. Somebody say, 'Enough is Enough.'"

Hundreds of protesters stood vigil early on Thursday outside a convenience store in Baton Rouge, Louisiana, demanding the prosecution of police who fatally shot a black man there two days earlier. The demonstration was largely peaceful at about 1 a.m. local time as about 300 protesters remained outside of the Triple S Food Mart, where Alton Sterling, 37, was pinned to the ground and fatally shot in the chest by two white police officers on Tuesday. "There is not going to be a riot until they show they are not going to prosecute these people," said Arsby, a 53-year-old truck driver who declined to give his last name, as he stood outside of the store. "Right now it's just started." Some protesters blocked traffic while others marched, sang, and chanted, accusing the police of using "excessive force" against black residents. "If we stand divided, we are already defeated," Bishop Gregory Cooper of Baton Rouge told the crowd. Police stayed on the fringes of the gathering. Graphic video images of Tuesday's shooting of Alton Sterling, 37, unleashed protests and social media outcry over alleged police brutality against African-Americans in cities from Ferguson, Missouri, to Baltimore and New York. One officer shot Sterling five times at close range, and the other took something from his pants pocket as he was dying, according to images recorded by Abdullah Muflahi, owner of the store where Sterling was killed in the parking lot.

U.S. witnessed nationwide protests against police brutality, which first took place in Ferguson, Missouri over the death of Michael Brown, 18, who was fatally shot by a police officer in August 2014, and later in Baltimore in the wake of peaceful demonstrations over the death of Freddie Gray on April 19, 2015, questions have been raised regarding the existence of systemic injustice and racial discrimination against people of color in the U.S. In Baltimore, violent clashes took place between police and angry crowds on Baltimore's streets after the funeral of Gray, a 25-year-old black man who was fatally injured while in police custody. Similar events took place in Ferguson, Missouri when Michael Brown, an 18-year-old African-American male, was shot dead after an altercation with Darren Wilson, a 28-year-old white male Ferguson police officer. Wilson was not indicted by a grand jury on any criminal activity in relation to killing Brown. During the Ferguson protests, many police officers and the demonstrators were injured. According to the database of the U.S. daily Washington Post that keeps records of police shootings, Sterling is at least the 505th person fatally shot by police so far in 2016. The database tracked 990 shootings in 2015, and this year's shootings have already surpassed the shootings compared with the same period compared to the last year. Sterling is one of 122 black Americans shot and killed by police in 2016, of which some 10 percent of were unarmed at the time of the shooting, while about 61 percent were armed with a gun.
RELATED TOPICS