Protests spread in US after police shootings, more than 100 arrested 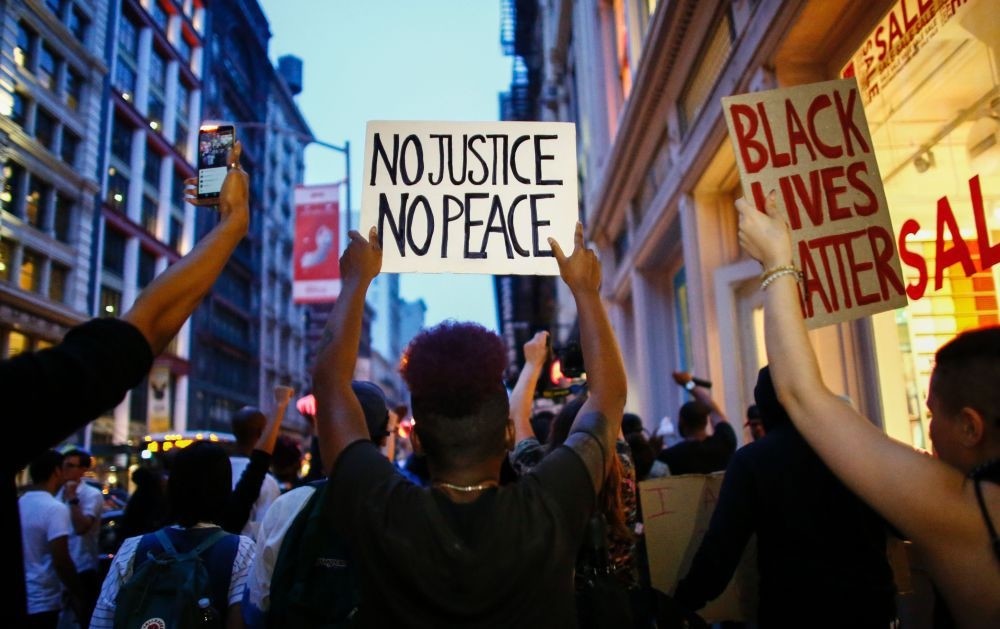 People shout slogans during a protest in support of the Black Lives Matter movement in New York, July 9.
by Daily Sabah with Wires Jul 11, 2016 12:00 am

Protests against the shooting of two black men by police continued in a number of U.S. cities on Saturday, leading to numerous arrests, scuffles and injuries in confrontations between police and demonstrators

Hundreds of people resumed protests in the U.S., and several were arrested after recent tensions triggered by police shooting black men in Louisiana and Minnesota and the deadly sniper attack on police officers in Dallas.

The first of the three shootings occurred on Tuesday when Alton Sterling, 37, was tackled and shot by police after selling CDs outside a convenience store in Baton Rouge, Louisiana. The next day, Philando Castile, 32, was fatally shot at a routine traffic stop in suburban Minneapolis, Minnesota. Castile's fiancée recorded the aftermath using Facebook Live as her boyfriend bled profusely, while the officer continued pointing his firearm at him. On Thursday, as demonstrators with the Black Lives Matter movement marched in Dallas, a black U.S. military veteran opened fire on police who were guarding the march, killing officers.

Police have increased security in cities across the country, and in a sign of the tense situation that continues in Dallas, police placed their headquarters on alert Saturday, while they searched for a suspicious person in a nearby parking garage. Special forces were activated, and security in the area was increased, according to news reports.

President Barack Obama prepared to cut short a diplomatic trip to Spain on Sunday to return to the United States to deal with the situation. At a news conference before leaving Poland, Obama called on Americans to unite against acts of violence and "not let the actions of a few define all of us."

Demonstrators gathered at the convenience store where 37-year-old Alton Sterling was shot before fanning out to the Baton Rouge police department and the state capitol for another day of demonstrations.

The gatherings came after overnight demonstrations produced tense moments resulting more than 100 arrests. The demonstration Saturday outside the Baton Rouge Police Department was at times tense again, as protesters faced off against police dressed in riot gear.

The Department of Justice has opened an investigation into Sterling's death, which has angered many in the black community. Prominent Black Lives Matter activist DeRay Mckesson was one of several people arrested at protests Saturday night during an often-tense protest in Louisiana that included a contingent of hundreds of people who took to the streets to call for justice and voice anger over the fatal shooting of a black man by two white police officers. It was not immediately clear what prompted Mckesson's arrest.

Shouting "No justice! No peace!" roughly 1,000 protesters gathered outside the police department, waving homemade signs as passing cars honked their support. Some drivers stopped by with bottles of water.

Members of the New Black Panther Party for Self Defense called for the arrest and indictment of the officers involved in Sterling's shooting, shouting "Black Power" and raising their fists. "These are human rights violations," Krystal Muhammad shouted to the crowd at the convenience store before heading over to the police department. "They are not operating as human beings. They are being predators on our communities across America."

There were also protests in Minnesota and California on Saturday with police having used smoke bombs to clear demonstrators blocking Interstate 94 in St. Paul.

A leader on a loudspeaker urged the group to march to the governor's mansion where protesters have gathered since the fatal police shooting Wednesday night of Castile. The 32-year-old black man was shot during a traffic stop in suburban St. Paul. The St. Paul Police Department tweeted that arrests were made, but didn't indicate how many and said at least five officers suffered non-serious injuries when hit by rocks, firecrackers and bottles thrown by protesters.

Several hundred protesters outraged by the police killings of black men in Louisiana and Minnesota took to the streets of San Francisco, blocking several roads and ramps to get on and off the Bay Bridge. Other protests were held in Colorado, Florida and Pennsylvania.

Several hundred demonstrators also marched in New York City late Saturday for the third consecutive night to protest police abuses against black people. Some in the crowd held up banners bearing the names Alton Sterling and Philando Castile. "Who's next?" read one sign. "Beware racism," read another.

The U.S. has witnessed nationwide protests against police brutality, which first took place in Ferguson, Missouri, over the death of Michael Brown, 18, who was fatally shot by a police officer in August 2014, and later in Baltimore in the wake of peaceful demonstrations over the death of Freddie Gray on April 19, 2015, questions have been raised regarding the existence of systemic injustice and racial discrimination against people of color in the U.S. In Baltimore, violent clashes took place between police and angry crowds on Baltimore's streets after the funeral of Gray, a 25-year-old black man who was fatally injured while in police custody. Similar events took place in Ferguson, Missouri, when Michael Brown, an 18-year-old African-American male, was shot dead after an altercation with Darren Wilson, a 28-year-old white male Ferguson police officer. Wilson was not indicted by a grand jury on any criminal activity in relation to killing Brown. During the Ferguson protests, many police officers and demonstrators were injured.
RELATED TOPICS