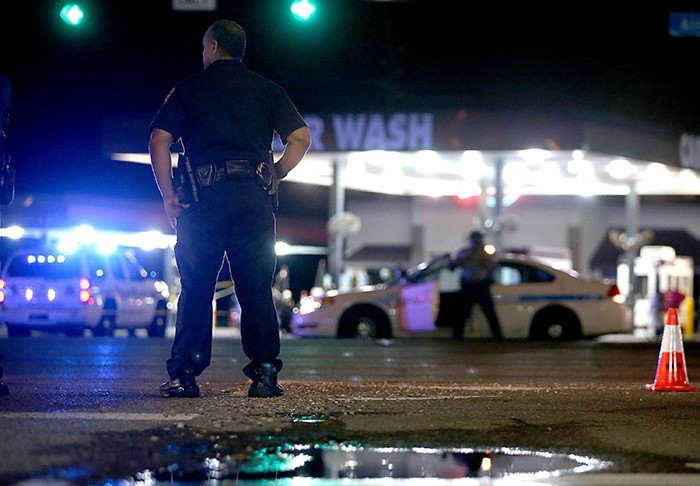 Police officers stand near the scene of where three police officers were killed this morning on July 17, 2016 in Baton Rouge, Louisiana. (AFP Photo)
by Daily Sabah with AP Jul 18, 2016 12:00 am

Three police officers were killed by a former Marine in Baton Rouge, two weeks after violence triggered by tensions across the country between the black community and police. In total, eight officers and two civilians died, which sparked a national debate over race and policing

A former Marine dressed in black and carrying extra ammunition shot and killed three Baton Rouge law enforcement officers on Sunday, less than two weeks after a black man was fatally shot by police in the same city, in a confrontation that had sparked nightly protests that reverberated nationwide.

Three other officers were wounded, one critically. Police said the gunman was killed at the scene.

The shooting occurred less than a mile from police headquarters and added to the tensions across the country between the black community and police. Just days earlier one of the slain officers had posted an emotional Facebook message about the challenges of police work in the current environment.

President Barack Obama urged Americans to tamp down inflammatory words and actions. "We don't need careless accusations thrown around to score political points or to advance an agenda. We need to temper our words and open our hearts ... all of us," Obama said. The gunman was identified as Gavin Long of Kansas City, who turned 29 on Sunday.

Long, who was black, served in the Marines from 2005 to 2010, reaching the rank of sergeant. He was deployed to Iraq from June 2008 to January 2009, according to military records.

Although he was believed to be the only person who fired at officers, authorities were investigating whether he had some kind of help. "We are not ready to say he acted alone," state police spokesman Major Doug Cain said. Two "persons of interest" were detained for questioning in the nearby town of Addis. They were later released without any charges being filed.

While in the military Long was awarded several medals, including one for good conduct, and received an honorable discharge. His occupational expertise was listed as "data network specialist."

The University of Alabama issued a statement saying Long attended classes for one semester in the spring of 2012. A school spokesman said university police had no interactions with him.

In Kansas City, police officers, some with guns drawn, converged on a house listed as Long's.

"There simply is no place for more violence," Louisiana Governor John Bel Edwards said. "It doesn't further the conversation. It doesn't address any injustice perceived or real. It is just an injustice in and of itself."

From his window, Joshua Godwin said he saw the suspect who was dressed in black with a ski mask, combat boots and extra bullets. He appeared to be running "from an altercation."

Mike Spring awoke at a nearby house to a sound that he thought was from firecrackers. The noise went on for five to 10 minutes, getting louder.

Of the two officers who survived the shooting, one was hospitalized in critical condition, and the other was in fair condition. Another officer was being treated for non-life-threatening injuries, hospital officials said.

Two of the slain officers were from the Baton Rouge Police Department – 32-year-old Montrell Jackson, who had been on the force for a decade, and 41-year-old Matthew Gerald, who had been there for less than a year. The third fatality was Brad Garafola, 45, and a 24-year veteran of the East Baton Rouge Sheriff's Office.

Jackson, who was black, posted his message on Facebook on July 8, just three days after the death of 37-year-old Alton Sterling, a black man killed by white Baton Rouge officers after a scuffle at a convenience store.

In the message, Jackson said he was physically and emotionally tired and complained that while in uniform, he gets nasty looks. When he's out of uniform, he said, some people consider him a threat.

A friend of Jackson's family, Erika Green, confirmed the posting, which is no longer on Facebook. A screenshot of the image was circulating widely on the internet.

Relations between police and the community in Baton Rouge have been especially tense since Sterling's death. The killing was captured on cellphone video.

It was followed a day later by the shooting death of another black man in Minnesota, whose girlfriend livestreamed the aftermath of his death on Facebook. The next day, a black gunman in Dallas opened fire on police at a protest about the police shootings, killing five officers and heightening tensions even further.

Sterling's nephew condemned the killing of the three Baton Rouge officers. Terrance Carter spoke Sunday to The Associated Press by telephone, saying the family just wants peace. "My uncle wouldn't want this," Carter said. "He wasn't this type of man."

Also on Sunday, a domestic violence suspect opened fire on a Milwaukee police officer who was sitting in his squad car. The officer was seriously wounded, and the suspect fled and apparently killed himself, authorities said.

It was the fourth high-profile deadly encounter in the United States involving police over the past two weeks. In all, the violence has cost the lives of eight officers, including those in Baton Rouge, and two civilians, and sparked a national debate over race and policing.

The U.S. witnessed nationwide protests against police brutality, with the first major one taking place in Ferguson, Missouri over the death of Michael Brown, 18, who was fatally shot by a police officer in August 2014, and later in Baltimore in the wake of peaceful demonstrations over the death of Freddie Gray on April 19, 2015. Questions have been raised regarding the existence of systemic injustice and racial discrimination against people of color in the U.S. In Baltimore, violent clashes took place between police and angry crowds on the city's streets after the funeral of Gray, a 25-year-old black man who was fatally injured while in police custody. Similar events took place in Ferguson when Brown, an 18-year-old African-American male, was shot dead after an altercation with Darren Wilson, a 28-year-old white male Ferguson police officer. Wilson was not indicted by a grand jury on any criminal activity in relation to killing Brown. During the Ferguson protests, many police officers and the demonstrators were injured.

According to the database of the U.S. daily Washington Post that keeps records of police shootings, Sterling is at least the 505th person fatally shot by police so far in 2016. The database tracked 990 shootings in 2015, and this year's shootings have already surpassed shootings compared with the same period compared to the last year.