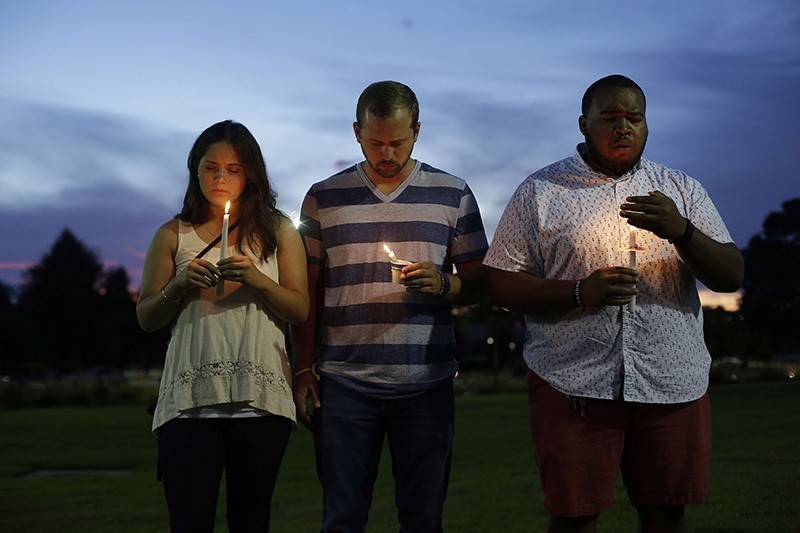 In the past two weeks, the Louisiana capital has seen a black man shot to death by white police and night after night of protests, followed by a fatal attack on three officers by a gunman who appeared to be targeting the badge.

Now Baton Rouge is a town marked by memorials — flowers, balloons and stuffed animals with notes of condolences.

The city of 229,000 is better known for its championship college football team and its political scene. But this broiling summer, it has been churning through tension and grief and taking a leading role in a national debate.

Sterling Pierce, a 32-year-old black appliance store worker, was shaken up Tuesday as he paid his respects outside the convenience store near where the officers were killed. A memorial at the site was growing as mourners streamed in to lay flowers and get hugs from a police chaplain. A sign read: "God ... please help us heal!"

Shaking his head, Pierce struggled to make sense of recent events and to foresee an end to the violence. He showed bullet marks on his car and said the city's problems run deep.

The killing "is not going to stop down here," he said. "It's never going to change."

Pierce said he was friends with Alton Sterling, the black man shot by white police officers two weeks ago. He also knew one of the officers killed this week, East Baton Rouge Parish sheriff's Deputy Brad Garafola, a repeat customer at the store where Pierce works.

As he spoke, Pierce was approached by a white woman, Deirdre Breaux, who hugged him.

"We're all the same on the inside. We're just a veneer on the outside," said the 49-year-old antiques collector from nearby Central.

She was more hopeful, saying she was encouraged by the tone and actions of local, city, state and federal officials.

"I see them lining up. They want to see progress, change," Breaux said. "What we don't need are outsiders bringing their propaganda and upsetting what we're trying to heal."

Thousands of people turned out at several locations around Baton Rouge for protests in the aftermath of Sterling's July 5 death. The 37-year-old was killed as two white officers pinned him to the pavement outside a convenience store where he sold CDs.

The killing was captured on cellphone video and widely circulated online. The footage drew attention to strained race relations and longstanding inequities in a city with a 55 percent black population that is informally segregated. The Justice Department has opened a civil rights investigation.

The weekend after Sterling's death, police in riot gear arrested nearly 200 protesters. The clashes grew increasingly intense after a deadly police shooting in Minnesota and the killing of five officers in Dallas.

Tensions continued to simmer, but the protests largely dissipated as Sterling's family laid him to rest Friday at a memorial service that drew thousands.

Just as the city appeared to take a breath, the next blow hit Sunday, when a masked former Marine ambushed law enforcement along a busy highway, killing three officers and wounding three more before he was shot and killed.

Sterling's family decried the officers' deaths. Even Louisiana State University's football coach, Les Miles, weighed in, saying in a statement that his heart "hurts for Baton Rouge and what's happened in our community."

Cleve Dunn Jr., a local businessman and leader in the black community who has been involved in the protests, denounced the bloodshed.

But while Sterling's death had started discussions about how to improve relations between minority communities and law enforcement, Dunn said the shooting deaths of the officers damaged those efforts.

Now police are "going to be on high alert," he said. Protesters "have already been in that place. That's a dangerous spot for everybody to be on the front lines, with that type of anger and that type of heartbreak being felt."

The protests have temporarily ceased, but Dunn expects them to resume after the funerals for the slain officers.

"We still want to move forward with our demands for justice and protest, but let's stand down a minute and pay respects to these officers and their families so the message isn't taken out of context," he said.

Only days before his killing, one of the slain officers, Jackson, had written a Facebook post expressing how difficult it was for him to be both a black man and a police officer. In it, Jackson described himself as "tired physically and emotionally."

"I swear to God I love this city, but I wonder if this city loves me. In uniform I get nasty hateful looks and out of uniform some consider me at threat," he wrote. He urged people: "Please don't let hate infect your heart. This city MUST and WILL get better."