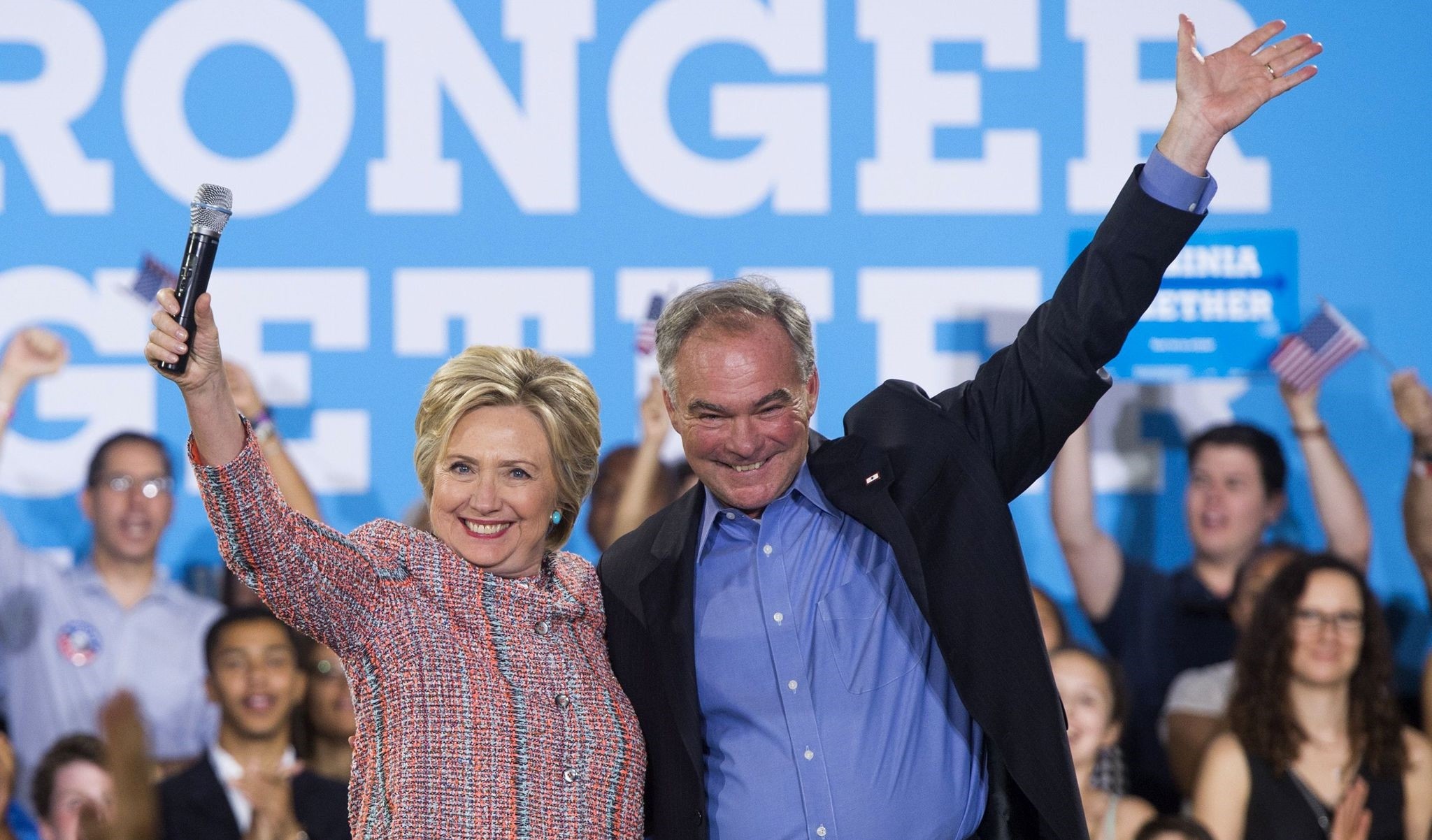 Hillary Clinton on Friday tapped Tim Kaine, a popular Spanish-speaking senator from the swing state of Virginia, to be her running mate in the White House showdown against Donald Trump.

The pick comes three days before the start of the Democratic National Convention in Philadelphia, where Clinton -- and now Kaine -- will be elevated as the nominees to the party's presidential ticket.

"I'm thrilled to announce my running mate, @timkaine, a man who's devoted his life to fighting for others. -H," the former secretary of state tweeted.

Widely seen as a safe choice in a brutal election race -- Kaine himself jokes that he is "boring" -- the senator emerged as frontrunner in the veepstakes because he ticks so many boxes.

An experienced foreign policy hand who serves on the Senate Foreign Relations and Armed Services committees, he could help Clinton lock in two key voting blocs: Hispanics and the battleground state of Virginia.

Politically a center-left Democrat, with working-class roots and a spotless record both as governor and senator, he is also seen as helping Clinton win over votes from reluctant independent male voters -- although at risk of alienating the party's progressive left wing.

The pair will hit the campaign trail together in Florida on Saturday.

The 58-year-old Kaine swiftly tweeted: "Just got off the phone with Hillary. I'm honored to be her running mate. Can't wait to hit the trail tomorrow in Miami!"

Clinton, 68, had said she wanted a running mate with enough experience to "literally get up one day and be the president of the United States."

Also on the short list were Agriculture Secretary Tom Vilsack, who has been friends with the Clintons for decades and is originally from another key battleground state, Pennsylvania; and Labor Secretary Thomas Perez, a Latino seen as a true liberal.

Clinton put out a series of tweets heaping praise on the senator.

She described him as "a relentless optimist who believes no problem is unsolvable if you put in the work to solve it" saying his guiding principle was "the belief that you can make a difference through public service."

One of Clinton's tweets included a five-point graphic highlighting the senator's youthful spell on a Jesuit mission in Honduras as well as his track record in fighting homelessness, discrimination and gun violence, in expanding early childhood education and in fostering a pro-business environment in Virginia.

The New York billionaire painted a dystopian dark picture of an America mired in poverty and violence as he accepted his party's nomination Thursday night, promising to restore security, clamp down on immigration and put America first.

Trump's choice of running mate, a conservative evangelical Christian and former congressman, could serve to reassure voters alarmed by his rhetoric.

"I heard about Donald Trump's dark and divisive vision," Clinton told a rally in Florida Friday.

"Last night's speech took it to a whole new level. He offered a lot of fear and anger and resentment, but no solutions about anything that he even talked about".

Nationwide polls suggest the New York mogul is almost neck and neck with Clinton, the former secretary of state who is mired in an ongoing email scandal.

While Republicans are split over support for Trump, their collective hatred of Clinton proved a potent unifier this week in Cleveland, where delegates clamored to demand her imprisonment, painting her as above the law.

In his acceptance speech, Trump characterized Clinton as corrupt, incompetent and hopelessly out of touch, saying she left a legacy of "death, destruction, terrorism and weakness."

But he stopped short of attacking Kaine himself -- a sign, perhaps, of his strength as a consensus candidate, as reflected in the response of another Republican, Arizona Senator Jeff Flake.

"Trying to count the ways I hate @timkaine. Drawing a blank. Congrats to a good man and a good friend," he tweeted.