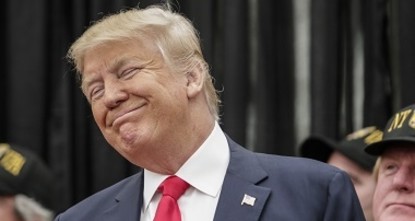 Republican presidential candidate Donald Trump on Friday backed away from repeated remarks labeling President Barack Obama and Democratic candidate Hillary Clinton as the founders of Daesh, saying they were sarcasm.

Trump used the unfounded description of Clinton and Obama on Wednesday night and all day on Thursday during campaign appearances in Florida, including in an interview on Thursday with radio talk show host Hugh Hewitt.

"I meant he's (Obama) the founder of ISIS. I do. He was the most valuable player," Trump said, using an acronym for the Daesh militant group, adding that Clinton also deserved the MVP award.

But in a tweet on Friday, he called the comments sarcasm.

It was the same tactic he used to try to quell criticism after he invited Russia in late July to dig up tens of thousands of "missing" emails from Clinton's time as U.S. secretary of state.

He tweeted, "Ratings challenged @CNN reports so seriously that I call President Obama (and Clinton) 'the founder' of ISIS, & MVP. THEY DON'T GET SARCASM?"

Trump's accusation against Obama and Clinton went well beyond a charge made in the past by him and other Republicans: that the president and former secretary of state helped create the conditions for the rise of Daesh by withdrawing U.S. troops from Iraq in 2011.

But a Wall Street Journal/NBC News/Marist poll released on Friday suggested support for Trump is eroding among voters in three battleground states.

Such states are hotly contested because their populations can swing either to Republicans or Democrats and thus play a decisive role in presidential elections.

The poll found Clinton widening her lead in Colorado, Virginia and North Carolina, while holding her advantage over Trump in Florida.

Clinton released her tax returns on Friday, painting the move as a sign of transparency that her campaign says Trump lacks.

While U.S. presidential candidates are not required to release their tax returns, it has become a common custom, and Clinton's tax returns have been made public, in some form, every year since 1977.

But Trump has cited an audit by the Internal Revenue Service in refusing to release his returns. Trump also has said his taxes are no one's business and that they reveal little.

Trump scheduled a speech in Warren, Ohio, on Monday that will focus on how he would handle the threat posed by Daesh. Trump has said he would "knock the hell out of ISIS," without offering details, and would persuade Gulf states to bankroll safe zones for Syrian refugees so they would not have to be brought to the United States.

Trump, a New York businessman who has never held elected office, has been mired in repeated controversies in recent days. He drew heavy criticism earlier this week after he suggested gun rights activists could take action against Clinton, a statement he later said was aimed at rallying votes against her.

He trails Clinton in opinion polls ahead of the Nov. 8 election. Many establishment Republicans, alarmed by a steady flow of controversial remarks that have distracted from the campaign battle against Clinton, have distanced themselves from Trump in recent weeks.

Nearly one-fifth of registered Republicans now want Trump to drop out of the race for the White House, according to a Reuters/Ipsos poll released on Wednesday.

On Monday, 50 prominent Republican national security officials, including a former CIA director, called Trump unqualified to lead the country and said he would be "the most reckless president in American history."

Trump has blamed the U.S. news media for taking many of his comments out of context, and on Thursday night some of his supporters heckled and cursed reporters who covered the rally in a large arena in Kissimmee, Florida.

Trump campaign officials were scheduled to meet with Republican National Committee officials in Orlando for what was described as a routine meeting to discuss operations in Florida, a battleground state that Trump needs to win.

Trump was scheduled to hold rallies in Erie and Altoona, Pennsylvania, on Friday.

Republicans frequently trace the birth of Daesh to the Obama administration's decision to withdraw the last U.S. forces from Iraq by the end of 2011.

But many analysts argue its roots lie in the decision of George W. Bush's Republican administration to invade Iraq in 2003 without a plan to fill the vacuum created by Saddam Hussein's ouster. It was Bush's administration, not Obama's, that negotiated the 2009 agreement that called for the withdrawal of all U.S. forces from Iraq by Dec. 31, 2011.