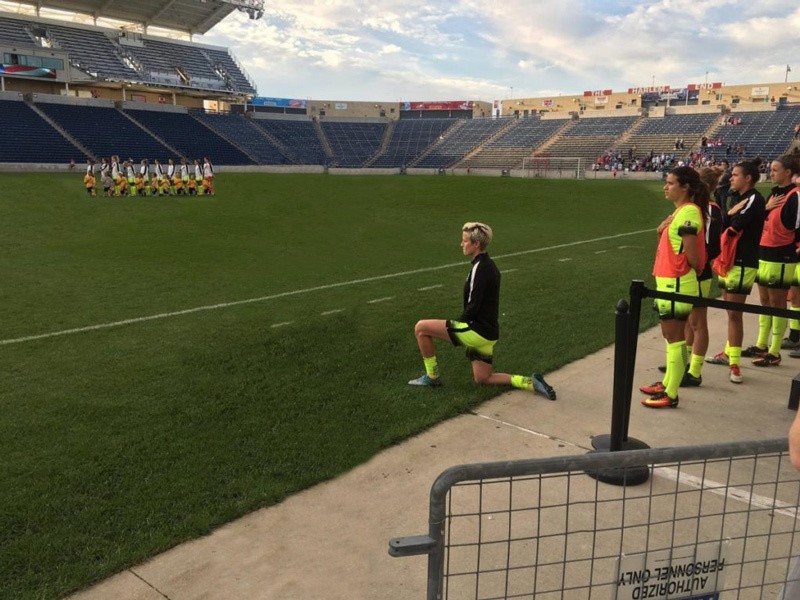 Kaepernick's refusal to stand for the national anthem to protest racial injustice and minority oppression came to public notice when he remained seated on the bench before a preseason game against Green Bay. On Thursday night in San Diego, he and safety Eric Reid knelt during the anthem before a game against the Chargers.

"It was very intentional," Rapinoe told American Soccer Now after Seattle's 2-2 tie in the National Women's Soccer League game. "It was a little nod to Kaepernick and everything that he's standing for right now. I think it's actually pretty disgusting the way he was treated and the way that a lot of the media has covered it and made it about something that it absolutely isn't. We need to have a more thoughtful, two-sided conversation about racial issues in this country.

"Being a gay American, I know what it means to look at the flag and not have it protect all of your liberties. It was something small that I could do and something that I plan to keep doing in the future and hopefully spark some meaningful conversation around it. It's important to have white people stand in support of people of color on this. We don't need to be the leading voice, of course, but standing in support of them is something that's really powerful."

Seattle Seahawks cornerback Jeremy Lane showed his support for Kaepernick by sitting on the bench during the national anthem at a preseason game in Oakland.

The 31-year-old Rapinoe has played for Seattle since 2013, after a stint with the French team Olympique Lyon. A standout at the University of Portland, she made her name with the senior U.S. Women's national team in 2006. Known for her creativity on the field, she has played in two Women's World Cups and two Olympics.

She injured her knee last December during training and required surgery, but was able to come back and play in the Rio Games. The United States, which had won three straight gold medals in the sport, was eliminated in the quarterfinals by Sweden.

Since coming out in 2012, Rapinoe has been devoted advocate for LGBT rights and has worked with the Gay, Lesbian & Straight Education Network (GLSEN) and other organizations.

Rapinoe also has been vocal about pay equity, and was among five national team players who lent their names to a complaint filed with the Equal Employment Opportunity Commission alleging wage discrimination. The players claim that members of the team make in some cases up to four times less than their male national team counterparts.

She has frequently spoken out on Twitter, delving into politics and even calling out NWSL when a match was played on an extremely narrow field earlier this summer.