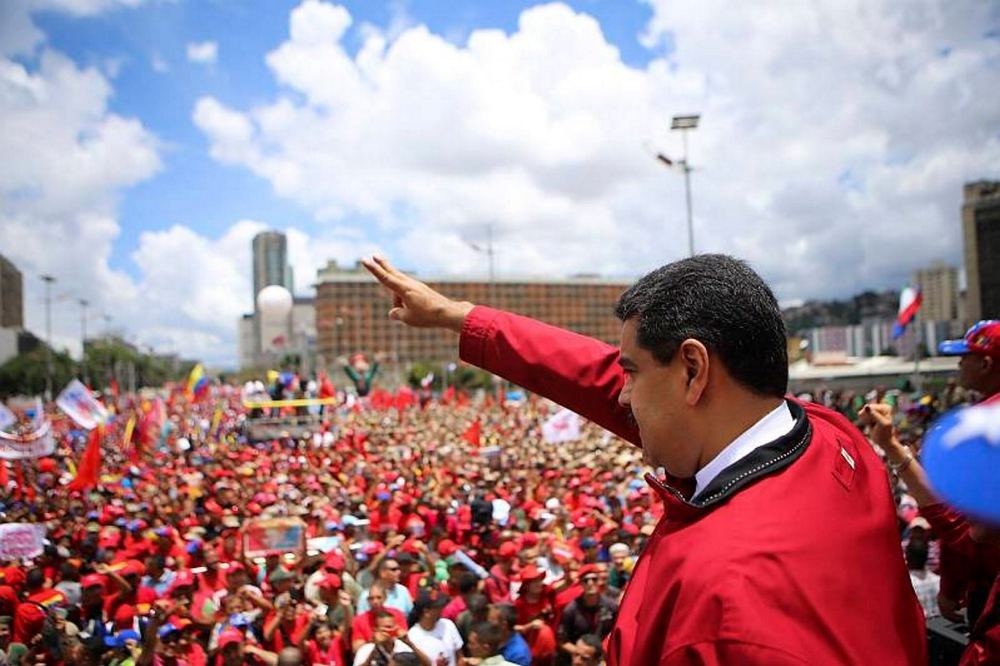 President Nicolas Maduro during a rally in Caracas on Sept. 1.
by Sep 08, 2016 12:00 am
Venezuela's opposition has called for new nationwide protests against President Nicolas Maduro Wednesday, testing his grip on power six days after massive demonstrations showed the magnitude of anger over a raging crisis. The leftist leader has called his own supporters to hold rallies across the country, seeking to show his strength in the face of opposition pressure for a referendum on removing him from power by the end of the year.

With oil-rich Venezuela's once booming economy in melt-down and outrage mounting over shortages of food and medicine, the atmosphere is tense. The rival demos have raised fears of a return to the unrest that rocked Venezuela in 2014, when a wave of pro- and anti-government protests left 43 people dead.

Maduro said Tuesday night his opponents were planning violence in an attempt to oust him in a "coup." But he assured supporters the protesters were "isolated."

The center-right opposition for its part accuses Maduro of an authoritarian crack-down. Dozens of protesters were arrested in the aftermath of last Thursday's rally, according to rights groups. The opposition says around 1 million people flooded the streets of Caracas that day, the biggest protest in decades. Maduro put the turnout at 30,000 people maximum.

But there is no denying that the massive crowds, dressed in white and venting months of pent-up anger, gave the opposition new momentum in its drive to end 17 years of socialist rule by Maduro and his late predecessor, Hugo Chavez.

The coalition behind the referendum push, the Democratic Unity Roundtable (MUD), says it is seeking to build on that momentum with Wednesday's protests, which will shift the focus from the capital to the rest of the country. "We want to accelerate the political and electoral solution to this crisis," said spokesman Jesus Torrealba.

Protests will be held nationwide outside the local offices of the National Electoral Council (CNE), which is accused of stalling a referendum. Electoral officials said their offices would remain closed as a precaution. In Caracas, the opposition called its supporters to stop all activity for 10 minutes. "The opposition's road map is to try to keep people participating. The challenge is to stay active and peaceful in the street while pushing a referendum," said political analyst Luis Vicente Leon. But tension is running high. The two sides "want to annihilate each other," said sociologist Maryclen Stelling. "And unfortunately in war, anything goes."

The sharp drop in global oil prices since mid-2014 has pushed Venezuela's economy to the brink. Long lines and bare supermarket shelves have become the norm, inflation is forecast to top 700 percent this year, outbreaks of looting have erupted and violent crime is festering. Maduro blames the crisis on an "economic war" by Venezuelan elites backed by "American imperialism."

The opposition won control of the legislature in a landslide election victory in December, but has had its powers hamstrung by a Supreme Court it condemns as loyal to Maduro. Desperate to get rid of the president before his six-year term ends in 2019, they turned to the strategy of a recall referendum.

Venezuela's constitution provides for such referenda, but there is a lengthy bureaucratic obstacle course to get there. And time is on the Maduro camp's side. If he loses a recall vote before January 10 - as opinion polls predict he would - it would trigger new elections. After that date, he would simply hand power to his hand-picked vice president. In the next stage of the referendum process, the opposition must gather four million signatures in three days. Electoral authorities are due to announce the dates for the petition next Tuesday. To keep up the pressure, the opposition has called for more protests the following day. Maduro is meanwhile facing growing pressure within his own camp. Former Chavez minister Ana Elisa Osorio, once a steadfast ally, told AFP this week that recent events show Maduro is "not up to the job." "There's no reason for the country to be in this crisis," she said. "There's no leadership facing up to the difficulties. Instead, at times, their backs are turned to the country's reality."
RELATED TOPICS