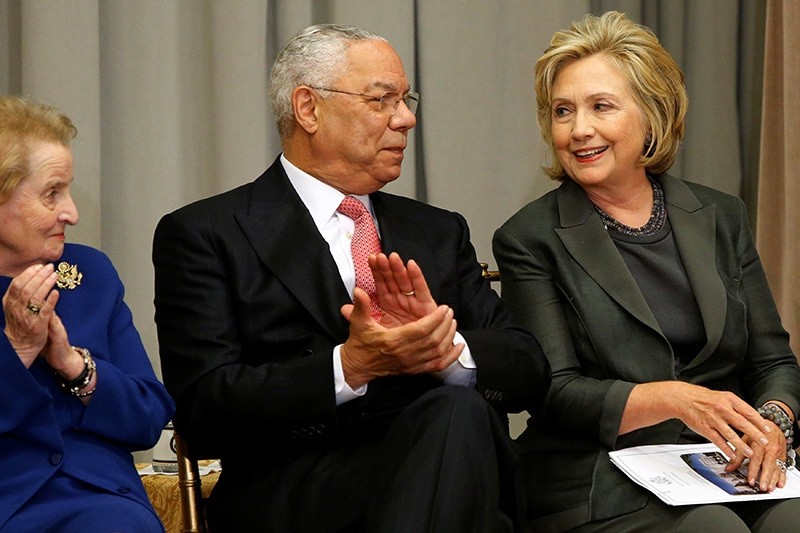 Former U.S. Secretaries of State Madeleine Albright (L-R), Colin Powell and Hillary Clinton listen to remarks at a groundbreaking ceremony for the U.S. Diplomacy Center at the State Department in Washington September 3, 2014. (Reuters Photo)
by Associated Press Sep 14, 2016 12:00 am

The emails were first reported by Buzzfeed News late Tuesday. Powell, a respected retired general who served under Republican presidential administrations, told BuzzFeed that he does not deny the emails' authenticity. In a subsequent statement to NBC News, Powell said "the hackers have a lot more" of his emails.

In the emails, Powell said he stayed relatively quiet during the rise of Trump, the Republican presidential nominee. "To go on and call him an idiot just emboldens him," Powell said.

He criticized Clinton aides for tying him into the controversy over the Democratic nominee's use of a private email server while she was secretary of state. Powell has acknowledged using a commercial email address for some official business. Clinton avoided using the State Department's email completely, using a private email server.

In an email reported by NBC, Powell wrote that he had told Clinton's "minions repeatedly that they are making a mistake trying to drag me in, yet they still try."

The emails were posted on the website DCLeaks.com, a website which has been alleged to be an outlet for hackers tied to the Russian intelligence groups. The website — which says it intends to expose the misuse of political power —has previously released emails from other Washington political figures.