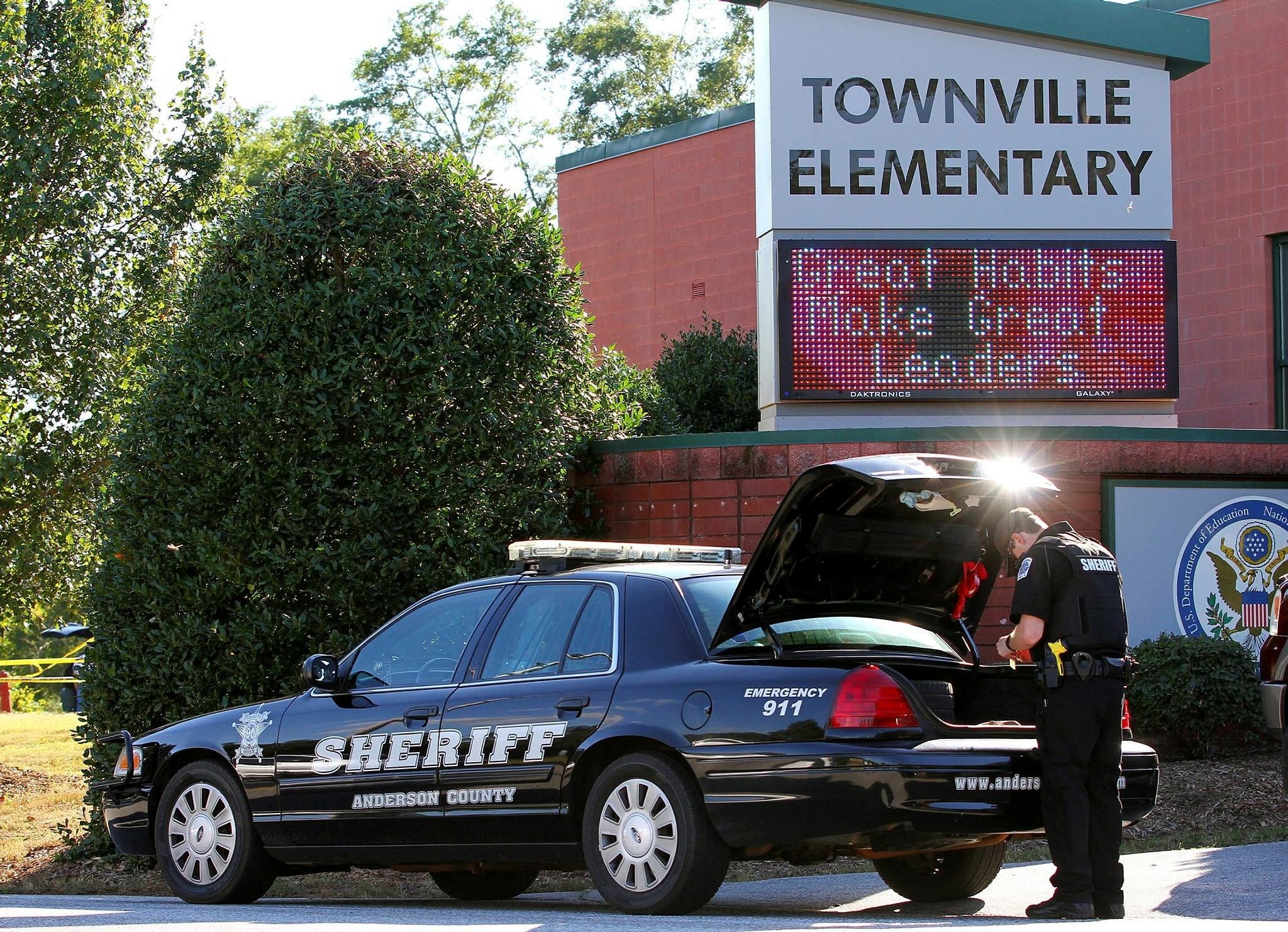 An Anderson County sheriffu2019s deputy stands outside of Townville Elementary School after a shooting in Townville, South Carolina, Sept. 28.
by Daily Sabah with Wires Sep 30, 2016 12:00 am

More U.S. children experienced gun violence as a South Carolina teenager killed his father and opened fire at an elementary school. The incident is the 37th school shooting in the U.S. in 2016

A teenager who killed his father at their home Wednesday was stopped by a volunteer firefighter as he opened fire outside a South Carolina elementary school, wounding two students and a teacher, authorities said. The incident was the latest in a series of mass shootings at U.S. schools that has fueled debate about gun violence. There have been as least 196 school shootings in the U.S., an average of nearly one in a week, according to a report released by Every Town for gun safety. The report also states that the South Carolina shooting is the 37th school shooting of 2016 and the sixth since the start of fall term.

The teen was apprehended within minutes of the shooting in this rural town about 110 miles northeast of Atlanta. One student was shot in the leg and the other in the foot, Capt. Garland Major with the Anderson County Sheriff's Office said. Both students were male. The female teacher was hit in the shoulder. "We are heartbroken about this senseless act of violence," said Joanne Avery, superintendent of Anderson County School District 4. She canceled classes at the school for the rest of the week. The rural school surrounded by working farms has about 300 students in its pre-kindergarten to sixth-grade classrooms.

Authorities said the shootings began at the teen's house about two miles from the school, where he gunned down his 47-year-old father, Jeffrey Osborne. Authorities have not released the suspect's name or age beyond saying that he's a teen.

Crying and upset, the teen called his grandmother's cellphone at 1:44 p.m., Anderson County Coroner Greg Shore said. The grandparents couldn't understand what was going on, so they went to his home just 100 yards away. When they got there, they found Osborne had been shot and their grandson was gone. About one minute later, authorities received a 911 call from Townville Elementary School.

Sheriff John Skipper said the shooter drove a vehicle into the school parking lot and immediately started firing a handgun as he got out and moved toward the school. He did not know who the vehicle was registered to, and he declined to say how many shots were fired.

Authorities did not release a motive for the shooting and said they weren't sure if the students and teacher were targeted. The sheriff said the teen had been homeschooled. "There are no racial undertones there. There's no terrorism involved," Major said. "We're confident we have the sole shooter and no one else is involved." Skipper said the teen's mother was at work at the time of the shooting. Considering the rising gun violence in the country, there was at least 336 gunshots in the vicinity of schools in one school year in the single school district of Washington, D.C., according to a report by the Urban Institute think-tank.
RELATED TOPICS