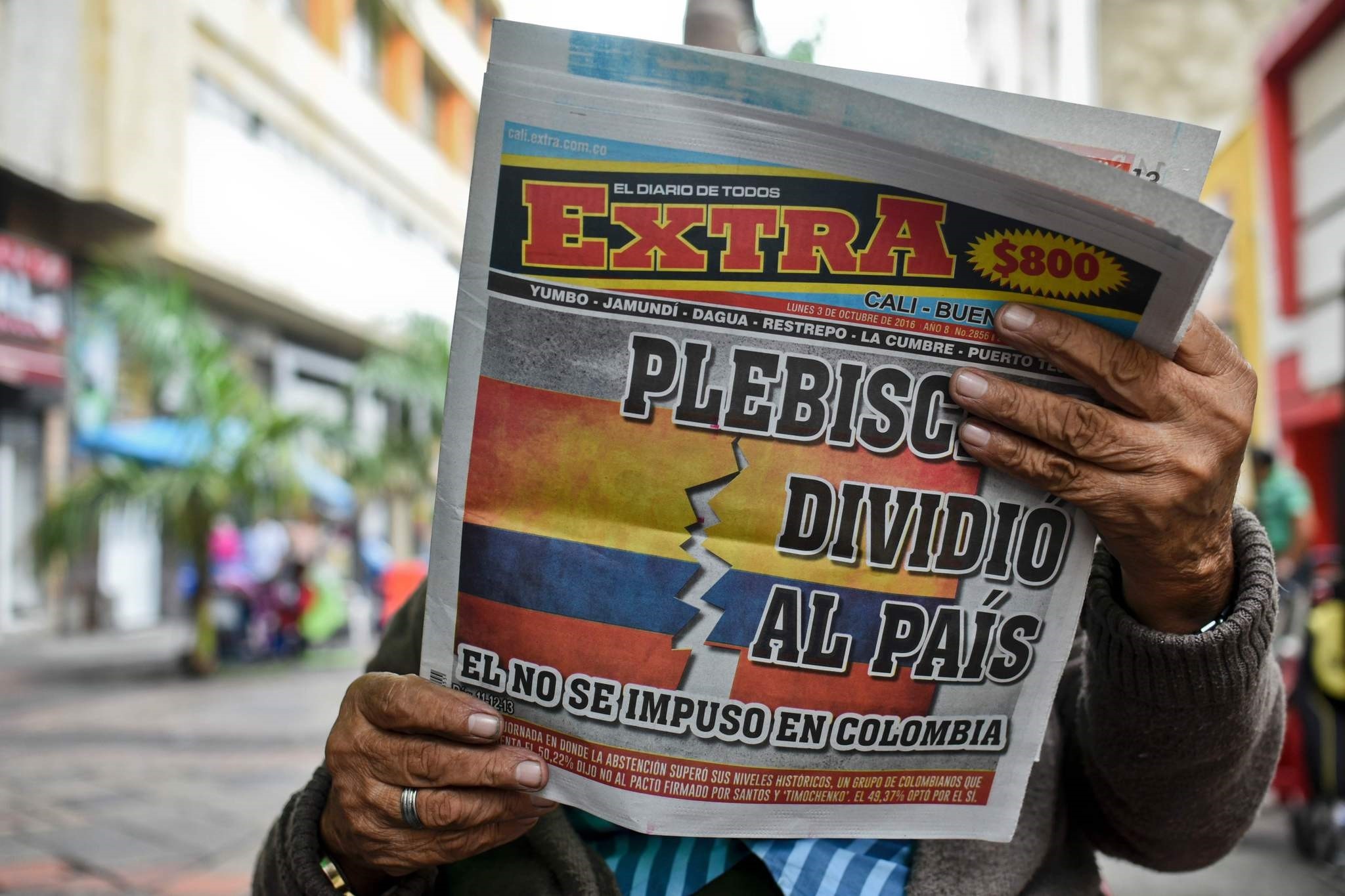 A man reads a newspaper announcing the results of the referendum that surprisingly said ,No, to the peace agreement between the Colombian government and the FARC guerrillas in Cali, Colombia, on October 3, 2016.
by Oct 03, 2016 12:00 am

Colombia's Marxist FARC guerrilas said on Monday they would maintain their ceasefire put in place over a year ago and "remain faithful" to the peace accord signed last week with the government.

In a statement, the Revolutionary Armed Forces of Colombia (FARC) called on social and political movements to mobilize peacefully and back the peace agreement that was narrowly rejected on Sunday in a plebiscite.

Both President Juan Manuel Santos and Rodrigo Londono, the top FARC commander better known by his nom de guerre Timochenko, put a brave face on the referendum setback after their teams had negotiated for four years in Havana.

They vowed to keep working together.

"I will keep seeking peace until the last minute of my term," Santos said.

"Count on us, peace will triumph," Timochenko added.

Santos, whose political stock has taken a buffering with the result and whose term ends in mid-2018, planned to meet all political parties on Monday.

Chief government negotiator Humberto de la Calle offered to resign, but the president is unlikely to accept that and in fact asked him to return to Havana to re-open new talks.

International exhortations for Colombia to stay on the path to peace came flooding in.

"We're saddened by the slim victory for 'No'," said Ecuador's foreign minister, Guillaume Long amid a chorus around Latin America. The deal was rejected by a razor-thin margin of less than half a percentage point, just 54,000 votes.

Turnout for the vote was a paltry 37 percent, reflecting some apathy from "Yes" supporters who had assumed an easy win, in addition to bad weather that deterred voters.

Following the result, peace researchers dropped Colombia from a list of favorites for the Nobel Peace Prize.

Colombian markets dipped in Monday's trading in disappointment at the rejection of a deal that may complicate government efforts to keep its agency ratings and pass the tax reforms to compensate for lost oil income.

The vote will also dent Santos' hopes for a boom in foreign investment in mining, oil and agriculture in Latin America's fourth-largest economy.

The United Nations applauded the maintenance of a ceasefire in Colombia despite the vote and said its special envoy, Jean Arnault, would also travel to Cuba to help the process.

"We would have hoped for a different result, but I am encouraged by the commitment expressed (by Santos and Timochenko)," U.N. chief Ban Ki-moon said. "I count on them to press ahead until they achieve secure and lasting peace.

Colombians, even those who backed the "No" vote, expressed shock at the outcome and uncertainty about the future.

"We never thought this could happen," said sociologist and "No" voter Mabel Castano, 37. "Now I just hope the government, the opposition and the FARC come up with something intelligent that includes us all."

VIDEOColombia's Santos committed to peace, despite 'no' vote

Colombia dropped as Nobel Peace Prize favorite after referendum 'No'

The peace accord reached in late August and signed a week ago offered the possibility that rebel fighters would hand in their weapons to the United Nations, confess their crimes and form a political party rooted in their Marxist ideology.

The FARC, which began as a peasant revolt in 1964, would have been able to compete in the 2018 presidential and legislative elections and have 10 unelected congressional seats guaranteed through 2026.

That enraged "No" supporters, including powerful former president Alvaro Uribe, who argued the rebels should serve jail terms and never be permitted to enter politics.

Uribe, a onetime ally who has become Santos' fiercest critic, may now hold the key to any potential re-negotiation.

The FARC already had softened its stance in the original negotiation, publicly admitting for the first time it trafficked drugs, recruited minors and committed human rights violations, including massacres.

But voters worried the rebels would not turn over assets from drugs and illegal mining, potentially giving them a formidable war chest that could outstrip the coffers of traditional parties.

Regions still riven by the conflict, including poor areas along the Pacific and Caribbean coasts, voted resoundingly in favor of the deal, but formerly violent interior areas pacified during the Uribe presidency largely backed the "No" camp.

"How sad. It seems Colombia has forgotten about the cruelty of war, our deaths, our injured, our mutilated, our victims and the suffering we've all lived through with this war," said Adriana Rivera, 43, a philosophy professor standing tearfully at the hotel housing the headquarters of the "Yes" campaign.