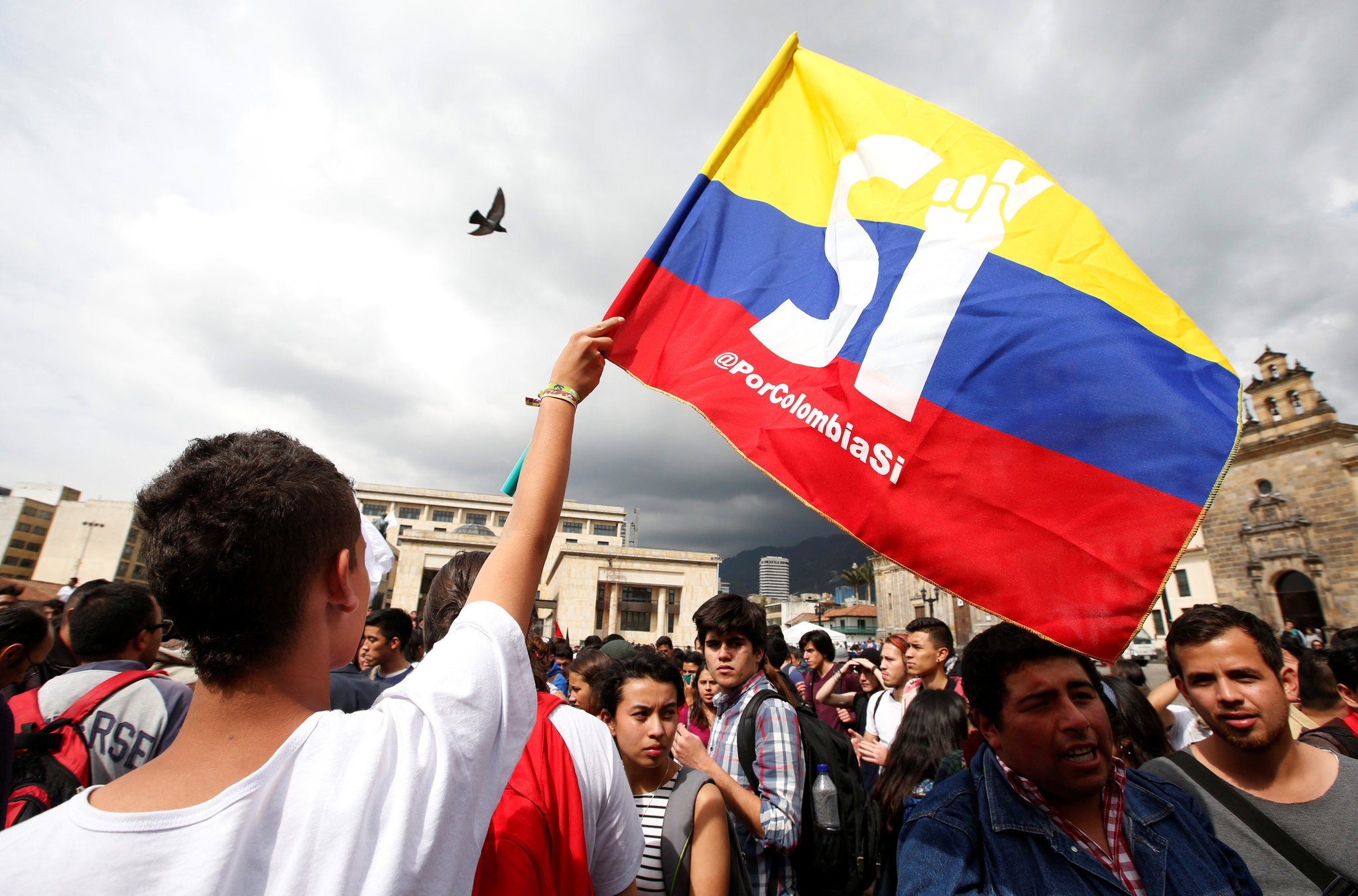 University students and supporters of the peace deal signed between the government and Revolutionary Armed Forces of Colombia (FARC) guerillas display a flag during a rally in front of Congress in Bogota, Colombia Oct. 3, 2016. (REUTERS Photo)
by Oct 04, 2016 12:00 am

The foreign ministers of Latin American governments release a statement, urging Colombia to push on with peace process.

Latin American governments Monday expressed their continued support for the peace process in Colombia, in a joint statement from the region's foreign ministers released in Buenos Aires.

The surprise defeat of the peace deal on Sunday should not be interpreted as a rejection of peace, the statement by the foreign ministers of Brazil, Mexico, Argentina, Chile, Uruguay and Paraguay said.

The ministers praised the Colombian government and the FARC guerilla group for maintaining their ceasefire, as well as President Juan Manuel Santos' call for all political parties to work together towards peace.

Ecuadorian President Rafael Correa also spoke against a resumption of the conflict. "In Colombia the no-vote won, but all claim they want peace," he wrote on Twitter.

President Juan Manuel Santos met with nearly all of Colombia's political parties on Monday at the presidential palace in Bogota, to open a national dialogue on the peace process in the wake of the vote, in which a razor-thin majority of Colombians rejected the accords.

Senate President Mauricio Lizcano said after the meeting that those who took part in the meeting supported the president in an attempt to salvage the peace process through renewed dialogue with a "specific timeline and concrete results."

But former president Alvaro Uribe and his far-right Democratic Centre party who led opposition to the deal, did not join Monday's talks. Instead, the party issued a statement saying that it was ready for dialogue and asking the country to take note of its "reasons" for the no vote.

Uribe and other opponents say they support the peace process but believe the accord finalized August 24 and signed in a ceremony in Cartagena a week ago was not tough enough on the Revolutionary Armed Forces of Colombia (FARC) guerrilla group.

The deal would have allowed FARC leaders to serve in Congress, with a guarantee of 10 seats, and serve reduced sentences for crimes committed during the 52-year armed conflict - concessions opponents say went too far.

"The [vote] does not have any legal effect. The effect is political," he said on Colombian television.

he defeat of the 297-page peace accord by a margin of less than a quarter of a percentage point came as a shock after observers had predicted a clear win, and left the government and FARC scrambling for a way to salvage the deal.

Santos said he was sending two top negotiators back to Havana, site of the nearly four years of peace talks, to meet with FARC - even though one of them, lead negotiator Humberto de la Calle, had offered his resignation.

European Union foreign policy chief Federica Mogherini said Europe respected the "sovereign choice" of the Colombian people, and would continue to support all steps toward securing a permanent end to violence.

"It is now for all sides in Colombia to unite and find the path that can lead the country to peace," she said in a statement.

White House spokesperson Josh Earnest said the White House was hopeful the parties "can settle on a path that leads to the kind of negotiated settlement and negotiated peace that all of the parties have indicated they would like to see."

He said the US stood ready to send an envoy to talks.

The peace accord between Colombia and the FARC was intended to put an end to 52 years of armed conflict that have killed 220,000 people and displaced millions.