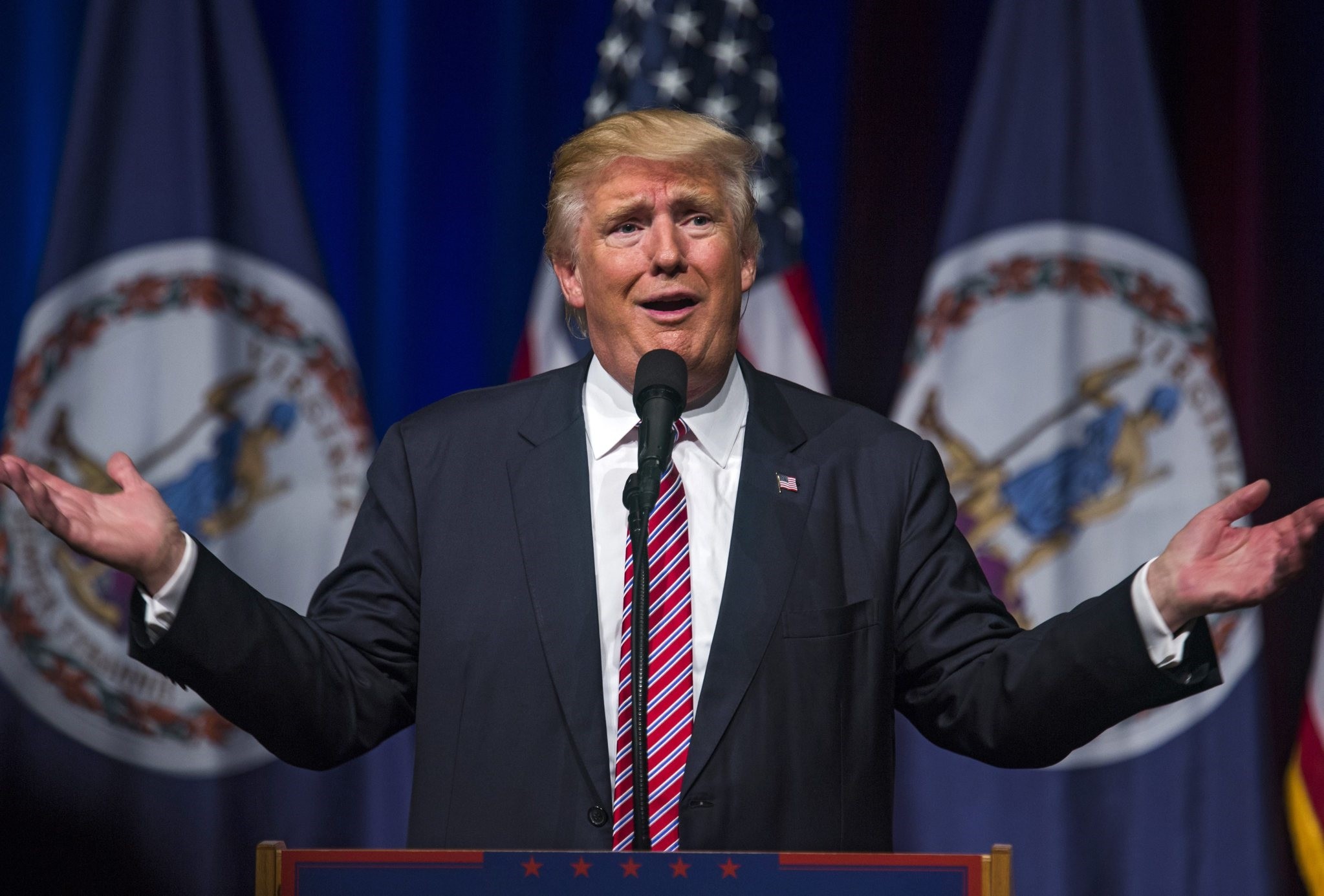 A defiant Donald Trump insisted Saturday he would "never" abandon his White House bid, rejecting a growing backlash from Republican leaders across the nation who disavowed the GOP's presidential nominee after he was caught on tape bragging about predatory advances on women.

Trump's own running mate, Indiana Gov. Mike Pence, declared he could neither condone nor defend Trump's remarks, which sparked widespread panic inside Trump Tower and throughout the Republican Party with early voting already underway exactly one month before Election Day.

"We pray for his family," Pence said in a statement after canceling a Wisconsin appearance scheduled with House Speaker Paul Ryan and the Republican National Committee chairman, Reince Priebus, both of whom had condemned Trump's remarks the day before but stopped short of withdrawing support altogether. The furor places enormous pressure on Trump to try to tamp down a crisis sure to spill into Sunday night's presidential debate.

Even as the fallout deepened fractures in a party already torn about Trump, many remained loyal to the political outsider.

"He's a real human," Stanley said of the New York businessman, surrounded by Trump supporters at the Wisconsin rally where he and Pence were scheduled to appear before the videotape emerged.

Ryan and Priebus did not join a chorus of GOP officeholders from Utah to Alabama to New Hampshire who decided the former reality television star's bombshell was too much to take. More than a dozen Republicans — senators, congressmen and sitting governors — announced Saturday they would not vote for Trump. Many went farther and called on him to quit the race altogether.

His party in chaos, Trump spent Saturday with a close circle of advisers in his campaign's midtown Manhattan headquarters.

Most of his staff and network of supporters were left in the dark about the fast-moving developments. Conference calls were canceled and prominent supporters were given no guidance about how to respond to the explosive development, according to a person close to the Trump operation. The person insisted on anonymity, lacking the authority to discuss internal campaign matters publicly.

Trump addressed the dire situation on Saturday with a light-hearted tweet: "Certainly has been an interesting 24 hours!"

He later tweeted he would not yield the GOP nomination under any circumstances: "The media and establishment want me out of the race so badly - I WILL NEVER DROP OUT OF THE RACE, WILL NEVER LET MY SUPPORTERS DOWN!"

The political firestorm was sparked by a 2005 video obtained and released Friday by The Washington Post and NBC News. In the video, Trump, who was married to his current wife at the time, is heard describing attempts to have sex with a married woman. He also brags about women letting him kiss them and grab their genitals because he is famous.

He apologized in a video statement released by his campaign after midnight early Saturday morning.

Melania Trump said she hoped people would accept her husband's apology "as I have."

Trump said, "I was wrong and I apologize," but also defiantly dismissed the revelations as "nothing more than a distraction" from a decade ago. Foreshadowing a likely attack in Sunday night's presidential debate, he also suggested that rival Hillary Clinton has committed greater sins against women.

"I've said some foolish things," Trump said. "But there's a big difference between the words and actions of other people. Bill Clinton has actually abused women and Hillary has bullied, attacked, shamed and intimidated his victims."

While still publicly backing Trump, the Republican National Committee is considering how to move forward.

One possibility: re-directing its expansive political operation away from Trump and toward helping vulnerable Senate and House candidates. Such a move would leave Trump with virtually no political infrastructure in swing states to identify his supporters and ensure they vote.

The latest Trump drama forced vulnerable Republican candidates to answer a painful question: Even if they condemn Trump's vulgar comments, will they still vote for him?

The answer was No for a growing number of GOP officeholders, including at least two sitting governors, six senators and a half dozen congressmen.

"I'm a mom and an American first, and I cannot and will not support a candidate for president who brags about degrading and assaulting women," New Hampshire Sen. Kelly Ayotte said. "I will not be voting for Donald Trump or Hillary Clinton and instead will be writing in Gov. Pence for president on Election Day."

South Dakota Sen. John Thune, a member of the Senate Republican leadership team, offered a sharp rebuke as well: "Donald Trump should withdraw and Mike Pence should be our nominee effective immediately."

Nevada Senate candidate Joe Heck said he was withdrawing his support: "I can no longer look past this pattern of behavior and inappropriate comments from Donald Trump."

And Republican Sen. Mike Crapo of Idaho revoked his endorsement: "This is not a decision that I have reached lightly, but his pattern of behavior left me no choice."

Election law experts suggest it would be logistically impossible to replace Trump on the ballot altogether, with early voting underway in some states and overseas ballots already distributed to military servicemen and others.

Ryan fundraising chief Spencer Zwick, however, said he's been fielding calls from donors who "want help putting money together to fund a new person to be the GOP nominee."

Zwick told The Associated Press that a write-in or "sticker campaign" relying on social media could "actually work." While there has never been a winning write-in campaign in a U.S. presidential contest, such an effort could make it harder for Trump to win.

The release of the videotape and ensuing backlash almost completely overshadowed the release of hacked emails from inside the Hillary Clinton campaign that revealed the contents of some of her previously secret paid speeches to Wall Street.

The Democratic nominee told bankers behind closed doors that she favored "open trade and open borders" and said Wall Street executives were best-positioned to help overhaul the U.S. financial sector. Such comments were distinctively at odds with her tough talk about trade and Wall Street during the primary campaign.

"It's over," Sullivan said. "The only good news is that in 30 days Trump will be back to being just a former reality TV star like the Kardashians, and Republican candidates across America will no longer be asked to respond to his stupid remarks."