Trump or Clinton? Young Americans would rather have meteor destroy the Earth, poll finds 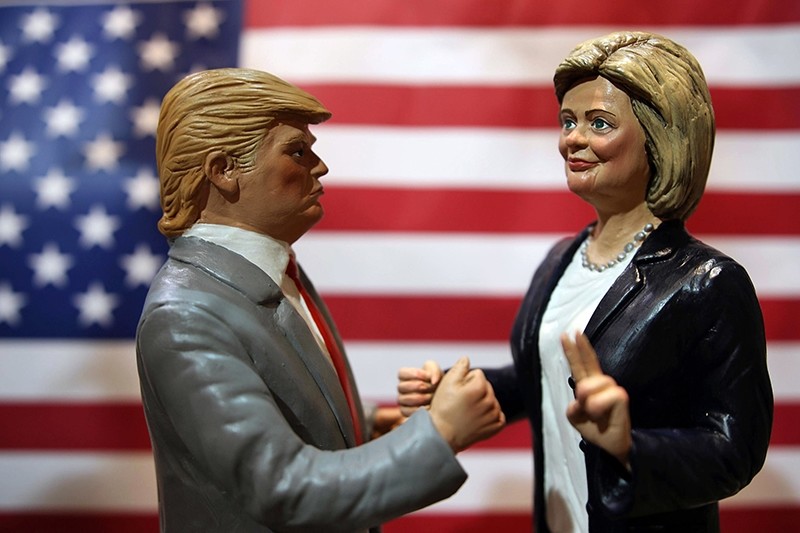 Statuettes depicting the presidential candidates Donald Trump, left, and Hillary Clinton are displayed in a shop in Via San Gregorio Armeno, the street of nativity scene craftsmen, in Naples. (AP Photo)
by reuters
Oct 18, 2016 12:00 am

Young Americans are so dissatisfied with their choices in this presidential election that nearly one in four told an opinion poll they would rather have a giant meteor destroy the Earth than see Donald Trump or Hillary Clinton in the White House.

The tongue-in-cheek question was intended to gauge young Americans' level of unhappiness about their choices in the Nov. 8 election, said Joshua Dyck, co-director of UMass Lowell's Center for Public Opinion, which conducted the poll alongside Odyssey Millennials.

The choice alluded to the Twitter hashtag "#GiantMeteor2016," a reference to an imaginary presidential candidate used to express frustration about this year's election choices.

Some 53 percent of the 1,247 people aged 18 to 35 said they would prefer to see a meteor destroy the world than have Republican New York real estate developer Trump in the Oval Office, with some 34 percent preferring planetary annihilation to seeing the Democratic former Secretary of State win.

Some 39 percent said they would prefer that U.S. President Barack Obama declare himself president for life than hand over power to Clinton or Trump, with 26 percent saying the nation would do better to select its next leader in a random lottery.

Some 23 percent, nearly one in four, preferred the giant meteor outcome to either Trump or Clinton.

"Obviously we don't think that they're serious," Dyck said in a phone interview on Tuesday. "The fact that one in four of our young people pick 'Giant Meteor' tells you something about the political disaffection that is being shown by American youth."

That contrasts with the surge of participation by young voters that helped propel Obama into the White House for his first term in the 2008 election.

When asked to choose between the actual candidates, Clinton easily led Trump with 54 percent of respondents to 21 percent in a two-way race.

In national polls surveying the whole population, Clinton is leading Trump, but not by nearly as much.

The poll, conducted Oct. 10-13, intentionally included a large number of people seen as unlikely to vote, with just 680 described as likely overs. It had a margin of error of 3.2 percent.