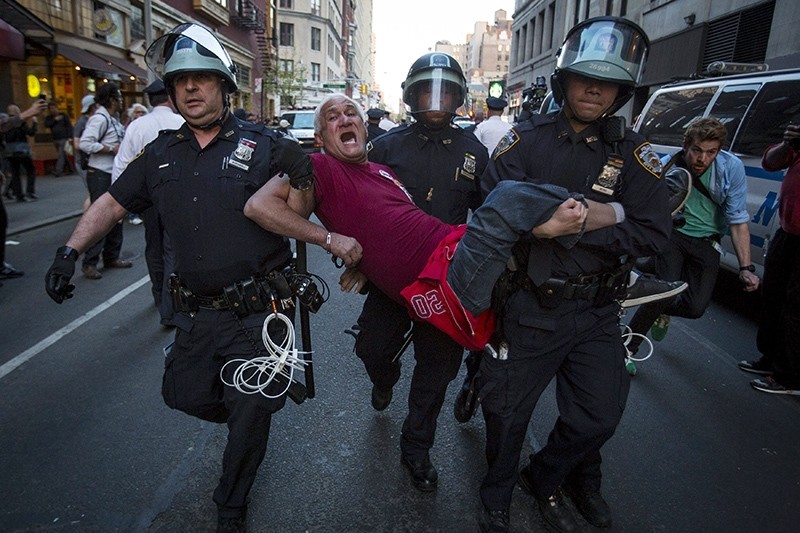 A protester is detained by New York police during a demonstration calling for social, economic and racial justice, in the Manhattan borough of New York City April 29, 2015 (Reuters Photo)
by Compiled from Wire Services Oct 18, 2016 12:00 am

The president of one of the largest police organizations in the United States on Monday apologized for historical mistreatment of minorities, calling it a "dark side of our shared history" that must be acknowledged and overcome.

Terrence M. Cunningham, head of the International Association of Chiefs of Police (IAPC) told a convention in San Diego that the history of policing has "darker periods", according to the Washington Post.

"Events over the past several years have caused many to question the actions of our officers and has tragically undermined the trust that the public must and should have in their police departments," he said to the IACP, which counts 23,000 police officials nationwide as members.

"While we obviously cannot change the past, it is clear that we must change the future," he said. "For our part, the first step is for law enforcement and the IACP to acknowledge and apologize for the actions of the past and the role that our profession has played in society's historical mistreatment of communities of color."

Race bias in policing has been a lingering issue in the United States. Statistics show that a disproportionate number of blacks face use of force and eventual death at the hands of law enforcement officials.

Leaders of the Black Lives Matter movement were less enthusiastic.

Campaign Zero co-founder DeRay Mckesson said he looked forward to Cunningham's comments being backed up by deep, structural changes to policing and the criminal justice system.

Charlene Carruthers, national director for Chicago-based BYP100, said an apology didn't go far enough. She said a major step would be taking financial resources away from law enforcement and redirecting them to community-based programs.

"Our profession is under attack right now and what we don't need is chiefs like him perpetuating that we are all bad guys in law enforcement," Kroll said. "I think it's an asinine statement. ... We've got officers dying on almost a daily basis now because of this environment, and statements like that don't help."

"It lets folks know there is a thing called compassion," Pruitt said.