US greenlights closure of 3 schools linked to FETÖ 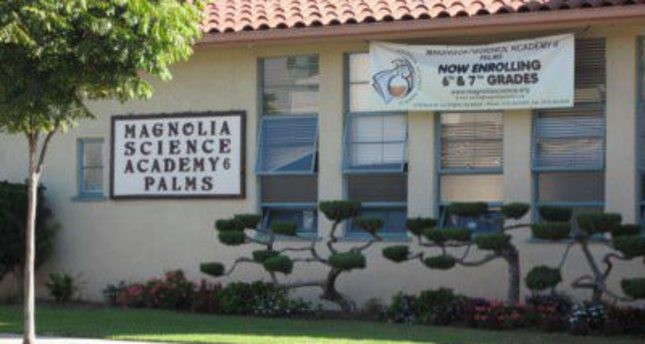 Magnolia Science Academy 6, one of the 8 Magnolia schools based in Los Angeles, United States
by Daily Sabah with AA Oct 19, 2016 12:00 am

The Los Angeles Board of Education opted to not renew contracts with three schools linked to the Gülenist terror cult (FETÖ), citing financial accountability concerns. The move comes after a July 15 coup attempt in Turkey blamed on FETÖ

Amid criticism of its charter schools for irregularities, the Los Angeles Board of Education decided not to renew operating agreements with three schools from Magnolia, a school chain affiliated with the Gülenist terror cult (FETÖ). FETÖ, which runs a global network of schools, are accused of conducting the July 15 coup attempt in Turkey.

The board voted with six votes and one abstention to close Magnolia Science Academy 1, 2 and 3 in a meeting on Tuesday.

Schools have a right to appeal to the decision but were given a deadline of July 1, 2017 to address their shortcomings or to be shut down.

The decision stems from what the board members described as shortcomings in financial accountability of the schools, including multiple delays on sending paperwork about the schools' finances.

Gülenists run some 10 schools in California under the name Magnolia, where the schools mostly employ Turkish teachers who arrive in the country with little command of the English language and are on temporary work visas. A report on the Los Angeles Times website says officials are more concerned about importing Turkish nationals and their families for teaching and other staff positions and the practice was subject to an investigation.

Ümit Yapanel, the Turkish CEO of Magnolia schools, has acknowledged that they were inspired by Fethullah Gülen's teachings in an interview to the U.S. media, although most charter schools operated by FETÖ sympathizers in the country deny any direct links to the group.

Last year, Congressman Raul Grijalva sent a letter to the Secretary of Education Arne Duncan, demanding a report on investigations into FETÖ's schools.

Also the parents whose children attend those schools complain that the schools' teachers who come from Turkey "can't speak English" and have no "scientific qualifications" according to media reports.

It filed an official complaint to the Ohio State Auditor about the Ohio-based Horizon Science Academies and Noble Academies due to their alleged improper relationships with their contracted management corporation, their landlord and its subsidiaries. The complaint said governing boards siphon money from classrooms to the schools' real estate arm New Plan Learning, Inc., forestall insolvencies, and use profits from excessive rental payments to acquire new properties to expand the network of Gülen-affiliated schools.