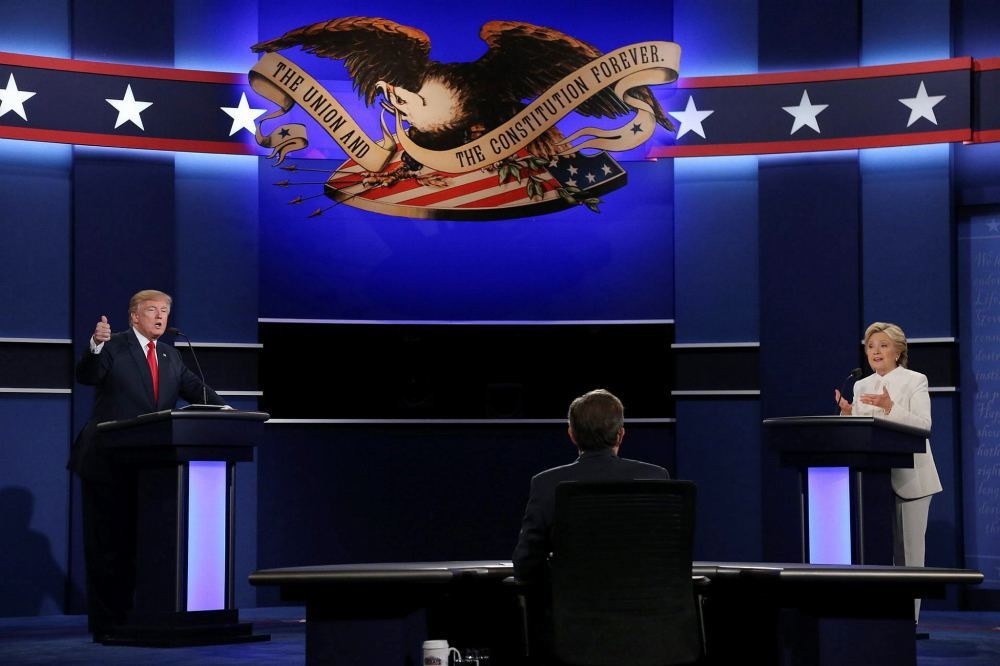 Republican candidate Donald Trump and Democratic candidate Hillary Clinton during the final Presidential debate at the University of Nevada-Las Vegas in Las Vegas, Nevada, USA, Oct. 19.
by Compiled from Wire Services Oct 22, 2016 12:00 am

The 240 years of U.S. democracy was undermined by Republican candidate Trump's election rhetoric as he avoids pledging to accept the result of the U.S. presidential election

In a bid to challenge U.S. democracy, Republican nominee Donald Trump cast the United States into uncharted political waters by suggesting he may not accept the result of the Nov. 8 presidential election and could launch a legal challenge if the Democratic nominee Hillary Clinton wins, undermining U.S. democracy.

The 70-year-old billionaire is trailing badly in the polls, and his performance debate opened him up to a stinging attack from Obama at a rally in Miami. "When you try to sow the seeds of doubt in people's minds about the legitimacy of our election, that undermines our democracy," Obama said.

"When you suggest rigging or fraud without a shred of evidence, when last night at the debate, Trump becomes the first major party nominee in American history to suggest that he will not concede despite losing... that is not a joking matter."

The unusually harsh comments suggest the White House believes this deeply rancorous election is not just about defeating Trump or winning back control of Congress, but snuffing out his populist credo.

The final 2016 presidential debate on Wednesday was dominated by Trump's refusal to say he would recognize a victory by Clinton, 68, who he accuses of conspiring to rig the vote against him.

"There is no way to rig an election in a country this big," Obama fired back. "You are much likelier to get struck by lightning than have somebody next to you commit voter fraud." The U.S.'s first lady Michelle Obama encouraged voters not to heed the Trump campaign's rigging allegations.

"They are trying to convince you that your vote doesn't matter," she told a Phoenix rally. "That the outcome has already been determined, and you shouldn't even bother to make your voice heard. They are trying to take away your hope," she added.

Although Trump looks set to lose the election, his campaign was sent into a tailspin by a stream of allegations of sexual misconduct, he is likely to garner as many as 50 million votes.

The campaign between Trump and Clinton has proven to be the caustic coda to decades of partisan rancor in Washington. Political tribalism has already caused gridlock in the government and eroded democratic institutions from the Supreme Court to Congress. Despite isolated allegations of voter fraud, controversy over the tight 2000 vote and rampant gerrymandering, U.S. elections have been regarded as free and fair.

Asked point-blank by a debate moderator on Wednesday whether he would accept the election result if he lost, the reality television star shattered that consensus. "I'll look at it at the time. What I've seen is so bad," he said, repeating unfounded allegations of voter fraud. Asked again by the moderator, Trump said "I'll tell you at the time. I'll keep you in suspense, OK?" His rival on the debate stage, and a phalanx of his fellow Republicans rushed to tell Trump it was not "OK."

Clinton declared herself "appalled" by what she said was an attack on 240 years of U.S. democracy. Trump's vice presidential running mate Mike Pence insisted "we'll accept the will of the American people."

Reince Priebus, the chairman of the Republican National Committee, offered assurances. "Barring massive voter fraud, of course he is going to accept the results of the elections," he said. Polls show Clinton leading by more than six points and making gains even in states like Arizona, Texas and Georgia that have long been in the Republican column.
RELATED TOPICS