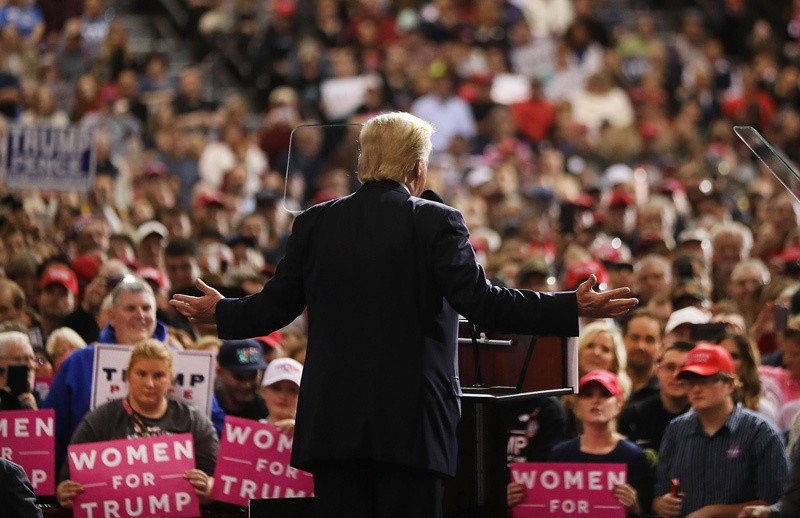 "Such a nasty woman."

Like many people, 23-year-old Emily DiVito was multitasking while watching last week's presidential debate, with a little studying and a little Twitter-surfing. But when DiVito heard Donald Trump say those four words to Hillary Clinton, she shot up in her seat.

"The interruptions were so absurd, but that was particularly biting," she said.

What's more, the moment gave DiVito, a former avid supporter of Clinton's primary rival Bernie Sanders, a feeling of solidarity with Clinton — a "moment of connectivity," as she put it. "I was for Bernie, but moments like this make me proud to be affiliated with her, the way she is persevering."

That's good news for Clinton, who despite her lead in the polls, has struggled to connect with millennial voters.

It also was probably bad news for Trump. Days after his devastating "grab 'em" remarks emerged and he started facing new allegations of sexual assault, the GOP presidential nominee had another bad week, leading some to wonder whether his popularity with female voters had reached rock bottom.

The candidate who so badly needed to close the gender gap instead saw his "nasty woman" remark — accompanied by a wagging index finger — become a feminist battle cry, a galvanizing moment for Clinton and an exclamation point to a campaign dominated by gender.

"I thought, 'That's it,'" said Spillar, executive director of the Feminist Majority Foundation. "Women voters are going to defeat Trump." The comment, she said, not only "summed up his whole attitude about women," but showed how bitter he was about potentially losing to one.

"Losing would be bad enough, but that he has lost to a woman really grates on him," Spillar said. "That's certainly clear. And this just fuels the gender gap."

In a Quinnipiac University poll released Wednesday, the day of the final presidential debate, Clinton led Trump among women by 52 to 37 percent. It showed 43 percent of men backed Trump and 41 percent were behind Clinton.

"It's certainly not nice, it's not appropriate, especially in a debate," said Stites, 61, of Northfield, New Jersey. "But he says what he thinks. You still have to judge him by the issues.

"I don't need to like my president," added Stites, a former employee of a Trump property, the now-shuttered Trump Taj Mahal in Atlantic City.

The "nasty woman" interjection — coming on a night when both candidates interrupted each other frequently — went viral. Spotify tweeted that streams of Janet Jackson's "Nasty" were up 250 percent. "Nasty Woman" T-shirts were on offer ("Bad Hombre" ones, too.) Rep. Nancy Pelosi, the Democratic leader in the House, got in on the act, tweeting to Clinton: "From one #NastyWoman to another, you were an inspiration last night."

"So much of this election cycle has been about the ways men belittle women when they don't get what they want from them," said Andi Zeisler, 43, feminist author and founder of the nonprofit Bitch Media. "Now, people are seeing themselves in Donald Trump's words toward Hillary, they're seeing themselves in how his surrogates act toward women — and toward Latinos and anyone who is not a straight white man."

The "nasty woman" remark, she said, is a "somewhat predictable and almost laughable apex" of what's been going on all year. But, she added, it is totally possible that there might be a new apex to come.

Throughout the debate, Clinton tried to highlight her opponent's trouble with female voters, saying at one point: "Donald thinks belittling women makes him bigger." When it came to abortion, she argued in a pointed way for a woman's right to control her own body, after Trump said he would appoint Supreme Court justices who would overturn Roe v. Wade.

That, too, impressed DiVito, who worked for Sanders' campaign for several months after graduating from Wellesley, Clinton's alma mater.

"I felt solidarity rooted in pride for a woman who was up there sticking up for other women against a man who has zero interest in trying to empathize with the emotional and physical complexity of abortion," DiVito said.

It didn't help Trump that he evoked audible laughter in the audience — despite moderator Chris Wallace's admonitions to the crowd — when he said: "Nobody has more respect for women than I do."

Debbie Walsh, who specializes in women and politics at Rutgers University, said she wasn't particularly shocked by Trump's remark, given his other recent statements.

"Gender is front and center in this campaign, and he is clearly using it," said Walsh, director of the school's Center for American Women and Politics. She recalled Trump's saying Clinton had "tremendous hate in her heart," calling her the devil, even saying he "wasn't impressed" when she walked in front of him — interpreted as a comment on her appearance.

"He is the gift that keeps on giving on this stuff," Walsh said.

For a male Clinton supporter, the moment was a chance to reflect on how women might react when they hear such things.

"I imagined women throwing things at the TV," said Stefan Krieger, 69, a law professor in New York. "I imagine there are some men that say such things to their girlfriends, their wives, their partners, in a fit of rage. It's a way of men lashing out with power."