Is Melania voting for me? Trump's photo looking at wife’s ballot goes viral 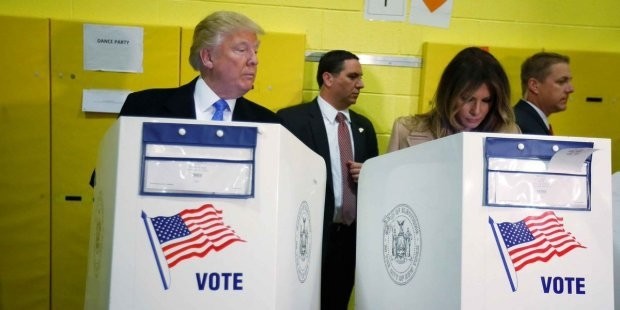 Republican presidential hopeful Donald Trump cast his ballot alongside his wife Melania in the historic U.S. election on Tuesday. A photo of him looking at the ballot paper of his wife went viral, sparking comments about his curiosity regarding Melania's decision.

Donald Trump voted near his home in the Democratic stronghold of New York, in a historic presidential election pitting the billionaire Republican against Democrat Hillary Clinton.

Trump arrived at the polling station at Public School 59 Beekman Hill International in midtown Manhattan, with a motorcade of limousines at around 11:00 am (1600 GMT) .

Half a dozen construction workers doing work on the street and wearing hard hats with Trump's campaign stickers applauded him.

After casting his vote in the school's basketball court, the 70-year-old real estate mogul quipped to reporters that it was a "tough decision."

"We'll see what happens," said Trump, dressed in a dark suit with a bright blue tie, when asked whether he would concede if the election were called for Clinton.

A similar response during his last presidential debate with Clinton last month was harshly criticized by Democrats and others for calling into question the peaceful transfer of power, a hallmark of the American electoral system.