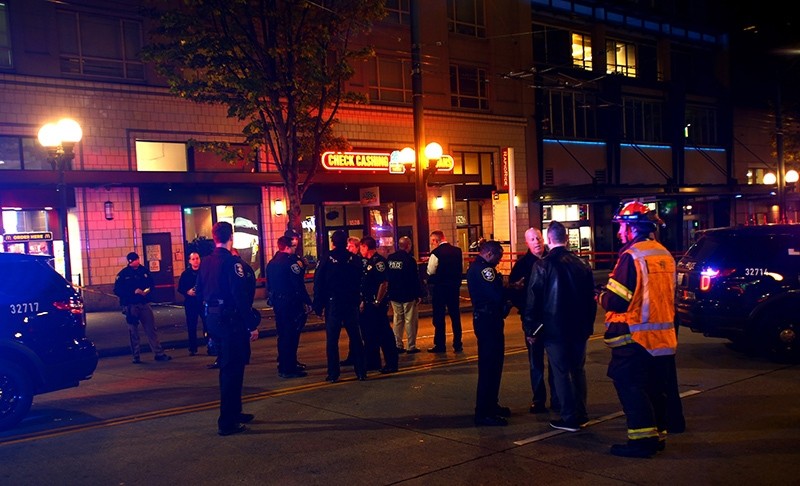 olice respond after five people were shot and wounded outside a 7-Eleven store near Pine Street and Third Avenue on November 9, 2016 (AFP Photo)
by Nov 10, 2016 12:00 am
A gunman opened fire in downtown Seattle on Wednesday evening following an argument and wounded five people, one man critically, not far from protests against the surprise victory of Republican Donald Trump in the U.S. presidential election.

The shooting did not appear to be connected to the anti-Trump demonstrations but instead stemmed from a personal argument, said Robert Merner, assistant chief of the Seattle Police Department.

"It appears that some type of argument took place. This individual began to walk away from the crowd, then turned and fired into the crowd," Merner told reporters.

He said the suspect then fled from the area on foot and remained at large more than an hour later.

The most seriously injured victim, a man, was rushed to nearby Harborview Medical Center, where he was listed in critical condition on Wednesday night.

The other four victims, identified only as one woman and three men, all sustained non-life threatening wounds to their legs, police said.

Police and fire crews were on the scene in less than a minute because they had been in the area to monitor the demonstrations, he said, but did not arrive in time to engage the suspect.

Thousands of people rallied in cities across the United States on Wednesday to protest against Trump's win, blasting his controversial campaign rhetoric against immigrants, Muslims and other groups.

In Seattle, hundreds of protesters marched through the downtown streets.

Following the shooting, police closed down the intersection of Third Avenue and Pine streets, where the shooting took place in front of a convenience store and a bus stop.