Anti-Trump protests marked by vandalism spread across US 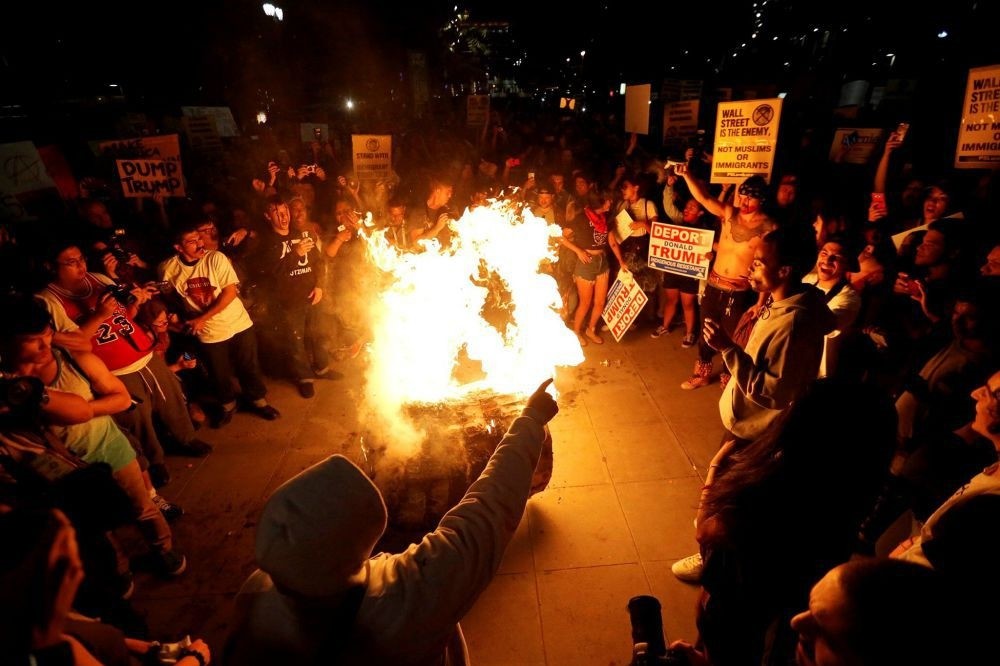 The rage over Donald Trump's victory in the U.S. presidential elections spilled onto the streets of major U.S. cities, as calls for secession came from California, the bluest patch on the electoral map

The raw divisions exposed by the presidential race were on full display across America on Wednesday, as protesters flooded city streets to condemn Donald Trump's election in demonstrations that burned flags and effigies alongside reports of vandalism.

From New England to heartland cities like Kansas City and along the West Coast, thousands of demonstrators carried flags and anti-Trump signs, disrupting traffic and declaring that they refused to accept Trump's triumph. Protesters also burned a giant orange-haired Trump effigy.

In Chicago, where thousands had recently poured onto the streets to celebrate the Chicago Cubs' first World Series victory in over a century, several thousand people marched through the Loop. They gathered outside Trump Tower, chanting "Not my president!"

Chicago resident Michael Burke said he believes the president-elect will "divide the country and stir up hatred." He added there was a constitutional duty not to accept that outcome.

A similar protest in Manhattan drew about 1,000 people. Outside Trump Tower on Fifth Avenue in midtown, police put up barricades to keep the demonstrators at bay.

Hundreds of protesters gathered near Philadelphia's City Hall despite a chilly, wet weather. Participants – who included both supporters of Democratic nominee Hillary Clinton and independent Vermont Sen. Bernie Sanders, who lost to Clinton in the primary – expressed anger at both Republicans and Democrats over the election's outcome.

In Boston, thousands of anti-Trump protesters streamed through downtown, chanting "Trump's a racist" and carrying signs that said "Impeach Trump" and "Abolish Electoral College." Clinton, who appeared to be on pace to win the popular vote, however, losing on the electoral count that decides the presidential race.

The protesters gathered on Boston Common before marching toward the Massachusetts Statehouse, with beefed-up security including extra police officers.

In St. Paul, Minnesota, a protest that began with about 100 people was steadily growing as the night went on.

After Trump's victory, thousands of Californians flocked to the streets on Tuesday night while demanding secession from the U.S., the Independent reported. The hashtag #Calexit began trending on Twitter, protestors gathered on the steps of the state capitol in Sacramento.

California has a long democrat history as 61 percent of Californians casted their ballots for Hillary Clinton in Tuesday's presidential election. The rallies followed protests overnight on Tuesday as voting results were being tallied, when at least one person was seriously injured in Oakland, California, where demonstrators broke store windows and set garbage alight.
RELATED TOPICS