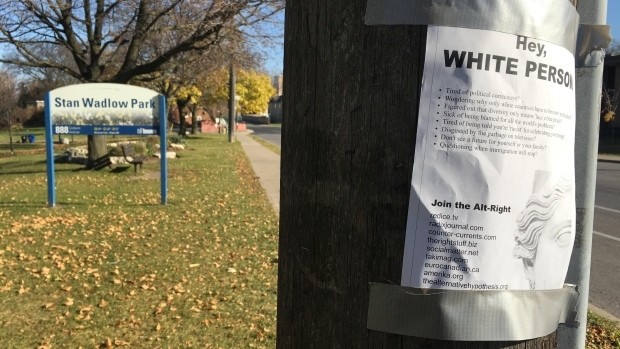 Toronto city staff were busy Monday tearing down signs that urged whites to mobilize against immigration, which some are saying are fueled by a Donald Trump presidential election victory in the United States.

The signs read: "Hey, WHITE PERSON" are you "wondering why only white countries have to become 'multicultural'? and why "diversity only means less white people?" Global television news reported.

Toronto Councillor Janet Davis tweeted that "this hate is unacceptable."

She told Global the signs might be the work of racists emboldened by the election of Donald Trump as U.S. president.

"I found the posters very disturbing," Davis said. "I think the sentiments expressed in the poster are totally unacceptable in this city and it's very worrisome.

"I'm quite worried that the Donald Trump election has legitimized this kind of ultra right wing viewpoint and encouraged these kind of expressions of hate."

Much of Trump's campaign was based on deporting millions of undocumented immigrants-many Mexicans and Latinos-and stopping Muslims from entering the United States.

Photos of Toronto posters appeared on social media and were termed racist by many, CTV News television reported.

The signs said white people who were "tired of political correctness (and) questioning when immigration will stop" to take action by joining an online movement," Global reported.

It is not the first time Trump's inflammatory remarks have been blamed for spreading racism on the Canadian side of the border.

Just one day before the Nov. 8 U.S. election, the outside wall of a school in the Canadian capital of Ottawa was besmirched with a spray paint of a swastika and "KKK" [Ku Klux Klan], an American white supremacist organization.