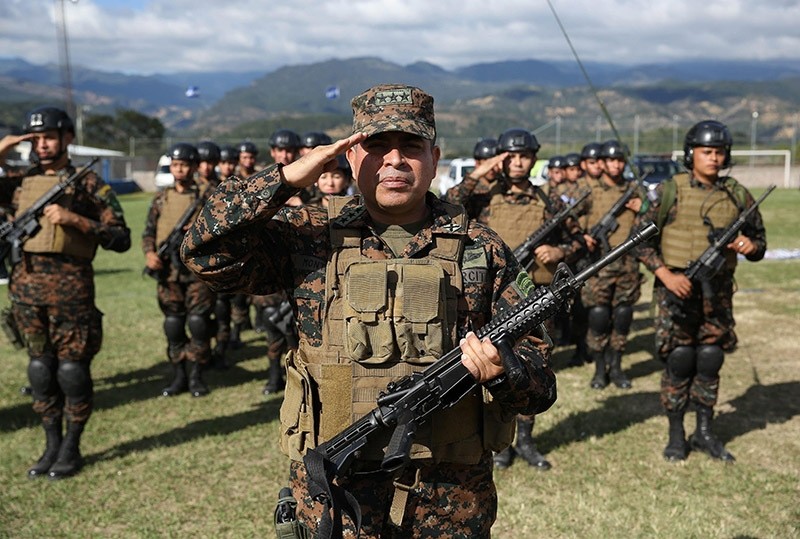 Members of the joint security force attend the launching ceremony in Nueva Ocotepeque, Honduras. (EPA Photo)
by Nov 16, 2016 12:00 am

The Central American nations of Honduras, Guatemala and El Salvador on Tuesday launched a joint security system to combat gangs and drug smuggling, as well as curtail migration and lower murders in one of the world's most violent regions.

The initiative will allow police and soldiers from each country to undertake coordinated actions to attack gangs, drug trafficking and people smuggling, officials said.

The three impoverished countries have each contributed to a sharp rise in the number of Central American migrants heading north to the United States in recent years, a flow U.S. President-elect Donald Trump has vowed to stop.

"What we are installing is the perfecting of shields along our borders," Honduran President Juan Orlando Hernandez said at an event in the western city of Nueva Ocotepeque, accompanied by Guatemalan President Jimmy Morales and Salvadoran President Salvador Sanchez Ceren.

"We're conscious of the fact that this war against crime, which we're winning, has, and is going to have, effects and repercussions, but we can't go backwards."

The joint security force is part of the so-called "Alliance for Prosperity" plan, which aims to regenerate the region with support from Washington, creating jobs and infrastructure.

That plan, whose fate is unclear after Trump's surprise election last week, was hatched after a sharp rise in Central American child migrants bound for the United States sparked a crisis for outgoing U.S. President Barack Obama in 2014.

Last year, as part of the plan, the U.S. Congress approved a first payment of $750 million for the three countries, but it has so far yet to materialize, Guatemala's foreign minister, Carlos Raul Morales, told Reuters.

Trump has said he will deport up to 3 million people living illegally in the United States, and crack down on immigration by building a border wall along the U.S.-Mexican border.

Morales said he had spoken with migrants in the United States and understood their "logical fears," but added it was too early to fully gauge what Trump will do as president.

Honduran president Hernandez said he would meet U.S. lawmakers from both parties to defend the Alliance for Prosperity.

"In the case of President-elect Trump, I think he has identified a clear objective: they don't want migrants there, just as we don't want our people to go," Hernandez said.