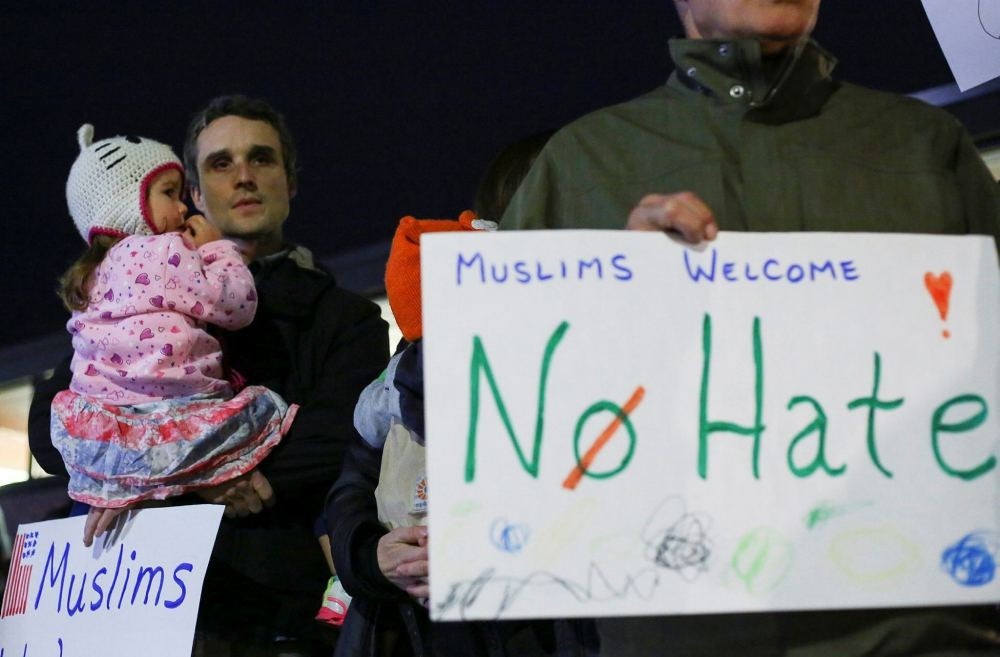 Demonstrators hold signs in support of Muslim residents in downtown Hamtramck, Michigan on Nov. 14.
by Compiled from Wire Services Nov 16, 2016 12:00 am

Amid heightened racial and religious tensions in the U.S. following last week's presidential election, hate crimes against Muslims in the country have surged 67 percent, FBI reports

Reported hate crimes against Muslims rose in 2015 to their highest number since the aftermath of the Sept. 11, 2001, terrorist attacks, according to FBI statistics released Monday. The report came at a time of increased tension after the 2016 presidential elections on Nov. 8.

Overall, the number of hate crimes reported by law enforcement agencies to the FBI increased 6.7 percent, from 5,479 incidents in 2014 to 5,850 last year. The total is far lower than the numbers seen in the early 2000s, but the FBI release comes amid numerous reports of attacks nationwide based on race and religion following last week's presidential election.

The most recent reporting covers calendar year 2015, which included the terror attacks in Paris and San Bernardino, California, as well as Republican Donald Trump's call for a ban on all Muslims entering the U.S. All of those, however, did not occur until the final two months of the year.

The Council on American-Islamic Relations (CAIR) said in a statement that it noticed "a sharp jump in anti-Muslim incidents nationwide last year. "This unprecedented increase in bigotry of all kinds must be repudiated in the strongest terms possible by all our nation's leaders, beginning with President-elect Donald Trump," said CAIR Government Affairs Director Robert McCaw.

On several occasions during the election cycle, Trump targeted Muslims, most controversially calling for a ban on entry that he later eased.

While its unknown if that will actually take effect once he officially takes office in January, reports have continued to mount regarding hate crime attacks against minorities, including Muslims, across the country. There have been reports of racist and anti-religious incidents around the country since the Nov. 8 election. The Southern Poverty Law Center, a non-profit that combats hate crimes, said it has tracked 315 cases of "hateful harassment and intimidation" since Election Day alone.

Two students at a vocational school in York County, Pennsylvania, held a Donald Trump sign in a hallway as someone shouted "white power," an incident captured on video and widely shared on Facebook.

In Silver Spring, Maryland, a banner advertising a Spanish-language service at an Episcopal church was slashed and the words "Trump nation. Whites only" were written on the back.

Authorities on two California State University campuses, in San Diego and San Jose, were investigating reports that two women wearing headscarves were attacked. At San Diego State University, authorities said a Muslim woman had her car keys and vehicle stolen by two men who targeted her while she wore a hijab and made comments about Donald Trump's election. At the same time, a videotaped assault in Chicago showed black men beating a white man as onlookers screamed, "You voted Trump!"