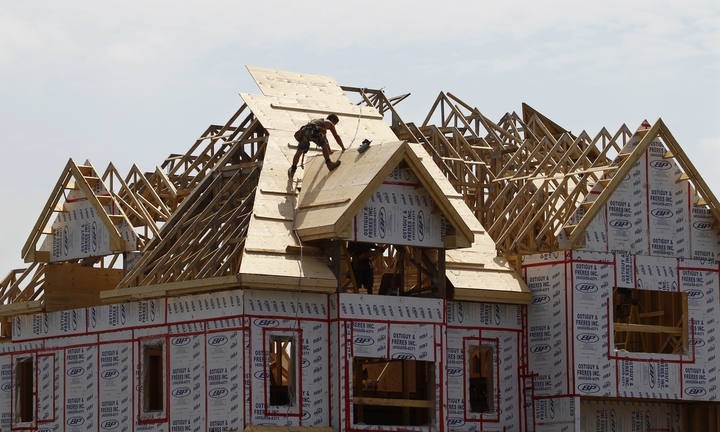 A builder works on the the roof of a new home under construction in the Montreal (Reuters Photo)
by Anadolu Agency Nov 17, 2016 12:00 am

A proposal to build homes for about 100 Muslim families in Montreal has run into fierce opposition but the man behind the project said Wednesday he will push ahead with the plan.

Nabil Warda, 68, a tax accountant and a Christian convert to Islam, said the housing idea is to provide a way for Muslims to buy homes without assuming regular mortgages because paying interest on bank loans is prohibited under some interpretations of Islamic law, the Toronto Star newspaper reported.

"A lot of Muslims have hang-ups about interest," Warda told the newspaper.

He said he does not care if the people who live in the development are practicing Muslims, reported the Canadian Broadcasting Corporation (CBC), Canada's national newscaster.

"For me, the values are: treat your brother with respect, be just, don't be unjust," Warda said. "It's not to pray five times a day."

But the creation of a Muslim-only community would go against the province's values of integration and inclusion, Quebec Premier Philippe Couillard told reporters Tuesday in Morocco, where he is attending a UN climate change conference.

Members of other political parties in the Quebec legislature also panned the project, with one member saying it would be a "ghetto," the CBC reported.

He said opposition to the project is in part due to Islamaphobia stoked by some media coverage showing women in full face veils along with the story about the development, the CBC reported.

Warda does not have financial backing as of yet for the development, but he told the CBC he was going to present his plan at a meeting Friday at the Islamic Community Centre, but canceled it because of possible demonstrations by those opposed to the development.

He said a new date would be set at a later time.