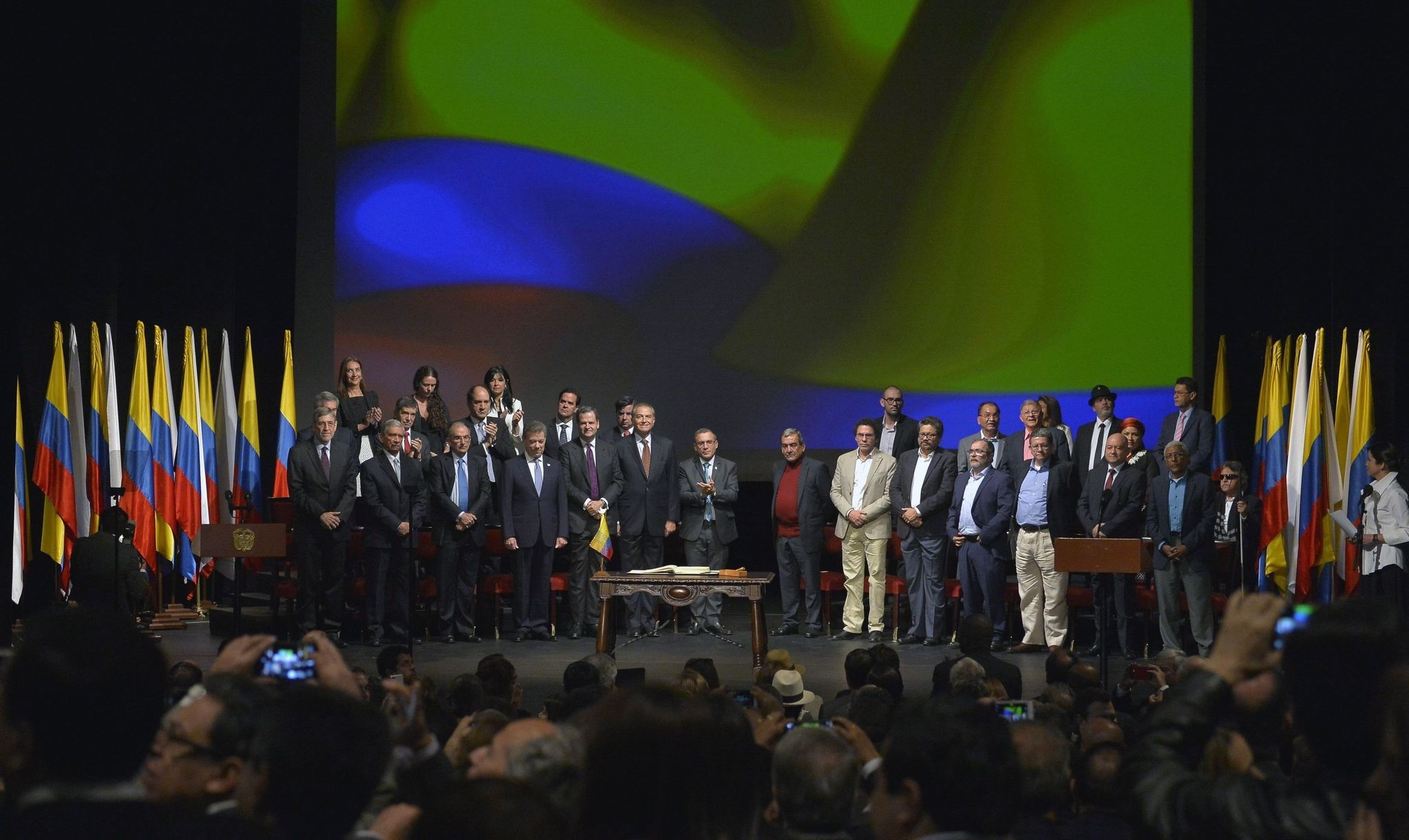 Colombian government and the Revolutionary Armed Forces of Colombia (FARC), at the Colon Theater in Bogota, Colombia, on November 24, 2016. (AFP Photo)
by reuters Nov 24, 2016 12:00 am
Colombia's President Juan Manuel Santos and Marxist FARC rebel leader Rodrigo Londono signed a revised peace accord on Thursday in a far more sober ceremony than a first deal rejected last month by millions at a plebiscite.

As they inked the pact with a pen made from a bullet at a Bogota theater, onlookers chanted "We did it!"

The new accord to end 52 years of war in Latin America's fourth-largest economy was put together in just over a month after the original pact was narrowly and unexpectedly defeated in an Oct. 2 referendum for being too lenient on the rebels.

The government and Revolutionary Armed Forces of Colombia (FARC) have met in Cuba for the last four years to end the region's longest-running conflict that has killed more than 220,000 and displaced millions in the Andean nation.

Opposition leader and former President Alvaro Uribe spearheaded the push to reject the original accord and wanted deeper changes to the new version.

He is furious Santos will ratify the new deal in Congress instead of holding another vote and is urging street protests.

The signing ceremony marked a six-month countdown for the 7,000-strong FARC to abandon weapons and form a political party.

Despite widespread relief at an end to conflict, many among Colombia's largely conservative residents are angry because, like the original agreement, the new document offers no jail time for FARC leaders who committed crimes like kidnappings and massacres, and it allows them to hold political office.

The understated signing in Bogota's Teatro Colon before mostly government and local dignitaries was a far cry from the fanfare celebration in September, where the coastal city of Cartagena hosted world leaders.

Santos, who won the Nobel Peace Prize last month for his peace efforts, wants to get the deal in place as quickly as possible to maintain a fragile bilateral ceasefire.

The expanded and highly complex new 310-page document makes only small modifications to the original text, such as clarifying private property rights and detailing more fully how the rebels would be confined in rural areas for crimes committed during the war.

The FARC, which began as a rebellion fighting rural poverty, has battled a dozen governments as well as right-wing paramilitary groups.

An end to the war with the FARC is unlikely to end violence in Colombia as the lucrative cocaine business has given rise to criminal gangs and traffickers.
Last Update: Nov 24, 2016 7:51 pm
RELATED TOPICS