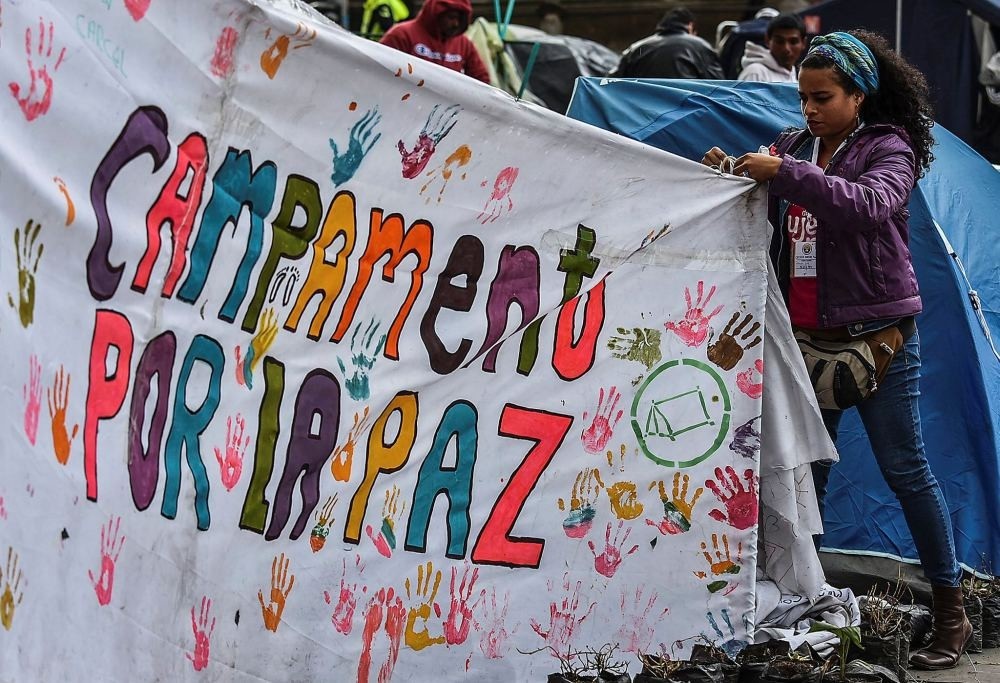 A woman sets up a tent reading u201cCamping for peaceu201d on Nov. 18.
by reuters Nov 24, 2016 12:00 am
Amid renewed efforts of signing new peace accord between Colombia's government and Marxist FARC rebels, Colombian opposition rejected peace deal while demanding a second referendum. The decision to ratify the revised accord in Congress instead of holding another referendum will anger members of the opposition, particularly former President Alvaro Uribe who spearheaded the push to reject the original accord and wants deeper changes to the new version.

The former Colombian President Alvaro Uribe has criticized it as just a slightly altered version of the original and wants rebel leaders to be banned from holding public office and for them to be jailed for crimes.

The government and the Revolutionary Armed Forces of Colombia (FARC) have been in talks in Havana, Cuba for the last four years, hammering out a deal to end a conflict that has killed more than 220,000 and displaced millions in the Andean country. The government published the revised peace deal last week in a bid to build support after the original draft was rejected in an Oct. 2 referendum amid objections it was too favorable to the rebels.

President Juan Manuel Santos and FARC leader Rodrigo Londono signed the original deal two months ago in an emotional ceremony before world leaders and United Nations Secretary General Ban Ki-moon. "This new accord possibly won't satisfy everybody, but that's what happens in peace accords. There are always critical voices; it is understandable and respectable," said Santos, 65, warning another plebiscite could divide the nation and put in danger the bilateral cease-fire. The expanded and highly technical 310-page document appears to make only small modifications to the original text, such as clarifying private property rights and detailing more fully how the rebels would be confined in rural areas for crimes committed during the war.
RELATED TOPICS