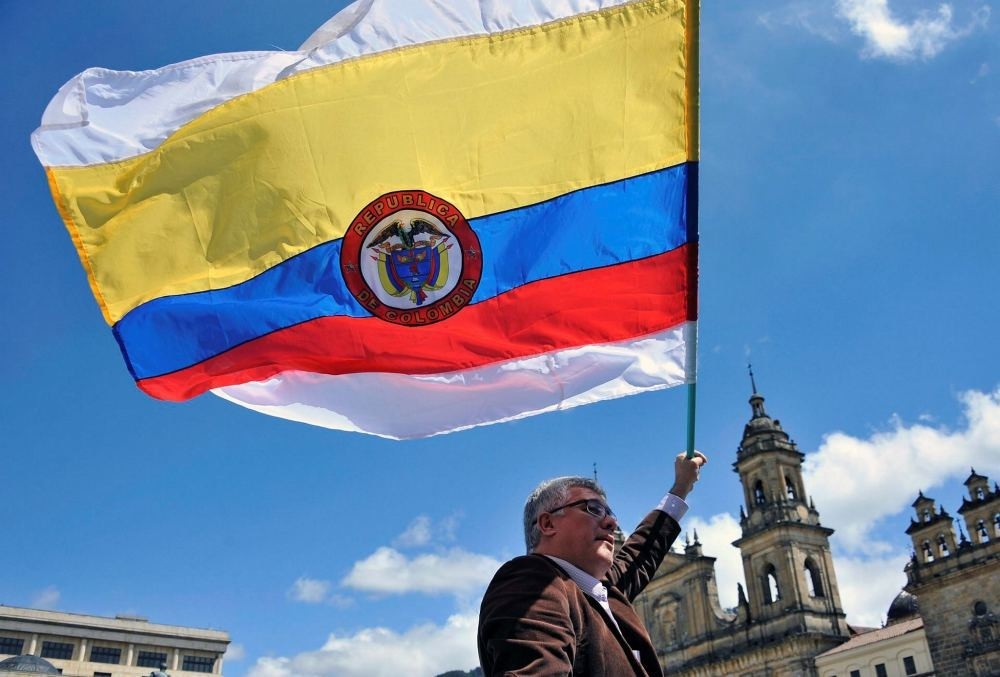 A man holds a Colombian national flag with white stripes during a demo to demand the immediate endorsement of the new peace agreement between the Colombian government and the FARC guerrilla outside the Colombian Congress in Bogota, Nov. 30.
by Dec 02, 2016 12:00 am
Colombia's Congress has given its stamp of approval to a peace accord aimed at ending a 52-year-old armed conflict with the Revolutionary Armed Forces of Colombia (FARC) guerrillas - Latin America's longest - but experts say implementing it will not be easy.

The lower house of the Congress approved the accord with FARC by a unanimous vote late Wednesday, clearing one of the last legal hurdles for it to go into effect.

But questions remain over the breadth of public support for the accord, despite four years of protracted negotiations in Havana between the Santos government and FARC.

The sides were forced to quickly renegotiate the treaty and submit the revised version to Congress for approval after an earlier version was narrowly rejected in a national referendum Oct. 2. Despite the unanimous approval in the House of Representatives and in the Senate on Tuesday, members of the opposition Democratic Center party of former president Alvaro Uribe walked out in protest before the votes were cast.

Uribe's conservative followers contended that a vote by Congress could not supplant the results of the referendum. "How is the Congress going to approve what the Colombian people rejected," Oscar Ivan Zuloaga, a former presidential candidate for Uribe's party, said earlier during the House debate.

Zuloaga was among a group representing different sides of the issue who were invited to speak before the vote. Also voicing their views were leaders of groups of victims of the civil war, representatives of the United Nations and other sectors of society.

Humberto de la Calle, the government's lead peace negotiator, urged the lawmakers to approve the deal, warning that it was otherwise at risk of unraveling. "The current situation of the ceasefire and pre-grouping of the guerrillas is fragile. This is not rhetoric," he said.

A ceasefire has been in effect since August, but it has been shaken in recent weeks by the deaths of two guerrillas in what authorities said was a clash with the army, and by a wave of assassinations and attacks targeting leaders of civil organizations in conflict areas.

The biggest bone of contention for opponents of the peace agreement are provisions that would offer non-custodial sentences to FARC members convicted of crimes, and allow them to run for office while still serving sentences.

With the Congress's stamp of approval, lawmakers must now approve a series of bills that would implement the peace accord, beginning with an amnesty for the guerrillas. "Tomorrow D-Day begins," said Santos. "And what does this mean? That in five days the transfer of all the members of the FARC to rural transition zones begins."

At those locations, the FARC's 5,700 fighters are to begin laying down their weapons under U.N. supervision.

"If that process goes well and without problems, it could change the political balance of power created by the plebiscite and the opposition's rejection of the accord," said Kyle Johnson, an analyst with the International Crisis Group. But he said there are still "challenges related not only to the politics but to the implementation on the ground."

This is the fourth attempt to establish peace with the FARC since it rose up against the state in 1964.

Santos, who won the 2016 Nobel peace prize for his efforts, follows failed peace attempts by presidents Belisario Betancur in the 1980s, Cesar Gaviria in the 1990s, and Andres Pastrana at the turn of the century.

More than 260,000 people have died in the conflict, which drew in other guerrilla forces, right-wing paramilitary groups, drug traffickers and government troops.

While the deal ends the conflict with the Marxist FARC, it is not peace across the board yet for the South American nation of over 47 million. Peace still has to be negotiated with the smaller National Liberation Army (ELN). Talks on scheduling the dialogue resume January 10.
RELATED TOPICS