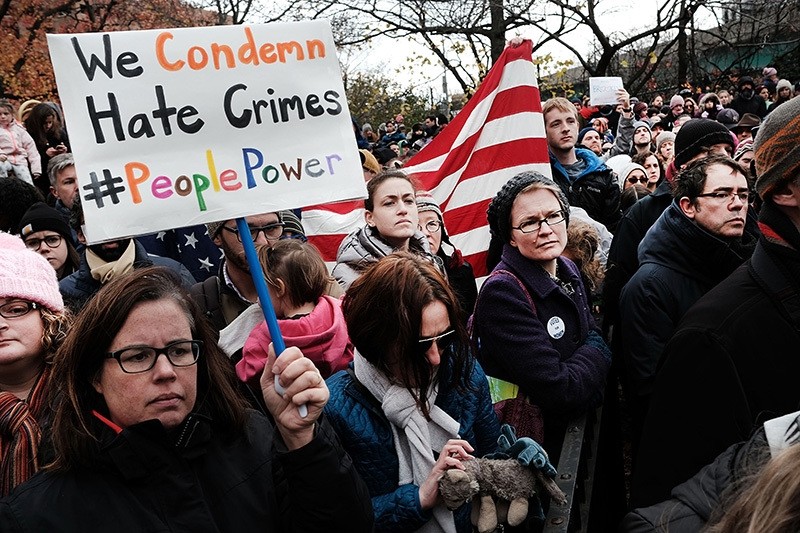 People participate in an anti-hate rally at a Brooklyn park named in memory of Beastie Boys band member Adam Yauch after it was defaced with swastikas on Nov. 20, 2016 in New York City. (AFP Photo)
by Compiled from Wire Services Dec 06, 2016 12:00 am

Two Muslim women working for authorities in New York suffered hate crimes just 36 hours apart, officials said Monday, while another Muslim woman was attacked on Subway, following an explosion in such incidents across the U.S. since Donald Trump's election.

A uniformed city transit employee was taken to hospital with injuries to her knee and ankle after being pushed down the stairs at Grand Central, the bustling rail hub in the heart of Manhattan, en route to work Monday.

Soha Salama, a 45-year-old Muslim Metropolitan Transportation Authority worker who wears the hijab, was verbally abused by passenger on the train, who then followed Salama off the car and pushed her off the stairs, leaving her with leg injuries.

The attacks against Salama and Elsokary came after an 18-year-old Muslim woman, who also wears the hijab, was harassed by three apparently drunk men on the platform of the number 6 train station in Manhattan. The men grabbed Yasmin Seweid's bag and broke its strap, before attempting to pull the hijab off her head.

Media reports said during the attack the men repeatedly screamed Donald Trump's name and called her a "[expletive] terrorist".

On Monday, another man was held on a $50,000 bail on a hate crime charge after an off-duty Muslim police officer Aml Elsokary was harassed in Brooklyn while out with her 16-year-old son Saturday evening, prosecutors said.

Cuomo said a subway train was also found vandalized with swastika graffiti on Saturday and that Ku Klux Klan fliers and business cards were distributed at two stations on the Long Island Rail Road last week.

The Democratic governor, an ally of Trump's opponent Hillary Clinton, said hate crimes would be prosecuted to the fullest extent possible.

"The work of the Hate Crimes Task Force has never been more urgent and we will continue to crack down on this type of criminal behavior," Cuomo said.

The hijab-wearing police officer and her son were subject to "ugly acts of hate, including threats of violence, simply because they are Muslim," said acting Brooklyn district attorney Eric Gonzalez. "Those who commit hate crimes will be held accountable for their reprehensible and offensive actions," he added.

"Do I blame Donald Trump for using hate speech during his campaign? Absolutely!," de Blasio said at a news conference in which he sat next to Elsokary.

The mayor avoided accusing Trump directly for the rise in hate attacks, however, and added that he "has a chance to make it better by amending his comments and being a force of reconciliation".

The attack on Elsokary was "unacceptable", de Blasio said.

"I was sick to my stomach when I heard that one of our officers was subjected to threats and taunting simply because of her faith," he said. "We can't allow this."

Elsokary, a NYC native, was awarded a medal for her bravery for saving a child and an elderly person from a burning building in 2014. De Blasio called her a "hero" at the time.

"This is Officer Elsokary's country. She is an American, she is a New Yorker. She is already at home," de Blasio said at Monday's press conference. "She is an example of everything we would want from our fellow citizens -- a commitment to others, a commitment to service, a willingness to do something greater than herself, and what does she get for it? Threats to her life and bigotry, taunts."

"I became a police officer to show the positive side of a New Yorker, Muslim woman that can do the job, that is non-bias, that I can help everybody no matter what's your religion," she said.

Elsokary dropped off her son Saturday in Brooklyn while off duty. After parking her car, she found the boy being pushed around by a white man in his 30s, later identified by police as Christopher Nelson, who was arrested Monday on charges of menacing and second-degree harassment.

"ISIS (expletive), I will cut your throat, go back to your country!" Nelson reportedly shouted at the unarmed officer and her son.

Elsokary, who wears the hijab on duty, has been serving as a member of the department for nearly 15 years, having joined shortly after the 9/11 terror attacks.

Meanwhile, almost three times more people have become victims of hate attacks in the city since the election of Trump than in the same period last year, according to the New York Police Department.

Thirty-four hate crimes or bias incidents were reported between the election Nov. 8 through Nov. 27, compared to 13 last year, according to police statistics.

New York is America's largest city and one of its most diverse with more than three million of its 8.55 million population foreign-born.

Nearly 900 incidents of hate and intolerance were recorded across the country in the first 10 days after presidential election, many by assailants apparently emboldened by his victory, an advocacy group reported last week.

Trump's shock Nov. 8 defeat of Clinton, who was bidding to become America's first female president, was cheered by white supremacists and others fired up by his rhetoric disparaging immigrants, Muslims and women.

The NYPD's Hate Crime Task Force has deemed 43 incidents possible hate crimes since Trump was elected a month ago. That's more than double the number cases reported during the same period last year.